Ted Cruz was showered with boos after he didn't endorse Donald Trump at the GOP convention. Join our live chat: https://t.co/AVzNF0YcQo

When Ted Cruz took the stage at the Republican National Convention, he was met with a round of boos when he didn’t endorse Trump, according to ABC News. How people outside the hall perceive Cruz’ non-endorsement speech is another question: It’s very polarized.

Cruz’ wife, Heidi, was escorted from the stage after the booing:

Heidi Cruz had to be escorted & rushed to safety, after Ted Cruz speech, who was booed by Trump supporters #RNCinCLE pic.twitter.com/VaHNwbYObK

A Time journalist said Trump’s team was behind the boos:

“To those listening, please, don’t stay home in November. If you love our country, and love your children as much as I know you do, stand, and speak, and vote your conscience, vote for candidates up and down the ticket who you trust to defend our freedom and to be faithful to the Constitution.” 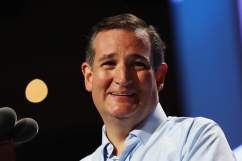 In the hall, though, Trump, the nominee, had some hand in delegate selection. What was the reaction outside the convention? On social media, some people were praising Cruz for sticking to his principles and not supporting a man they consider to still be a seriously flawed candidate. And in other corners, they were criticizing Cruz, and saying that he had committed “political suicide” by not exhibiting party loyalty.

Cruz, of course, was the runner-up to Trump in a hard-fought Republican primary that saw the Texas senator repeatedly labeled “Lyin’ Ted” by the New York billionaire and reality TV star. The scene at the convention was very heated following Cruz’ speech, said CNN. The network reported that Cruz was insulted by some people in the donor suite level after the speech and that one state party chairman had to be restrained because he was so angry at the Texas senator.

What was Twitter saying about the Cruz speech and how does his speech play into his chances for a 2020 presidential bid? Read:

TRUMP: Speak at this primetime slot

Ted Cruz may have set a record tonight. He may be the only speaker actually booed off the stage in a Republican Convention.

#NeverTrump is still dead, but it looks like @tedcruz decided to die with it @Ricky_Vaughn99 #BenedictCruz

Our hero @TedCruz just energized #NeverTrump to help defeat Trump and ensure his nomination in 2020. Such a deal! pic.twitter.com/d4uweRsh1k

I'd say Ted Cruz made it quite clear that #NeverTrump is alive and thriving. @SenTedCruz

Ted Cruz has now stepped into the sorry pages of history.
He's not worth discussing further.

Yes it's Ted Cruz's fault we nominated a Democrat with no integrity https://t.co/UDld7SAIAc

Ted Cruz knows he's beat. He can walk away. But no. He sets himself to self-destruct and laughs all the way down. It's his Predator moment.

Loading more stories
wpDiscuz
4
0
Would love your thoughts, please comment.x
()
x
| Reply
Ted Cruz was booed at the Republican National Convention when he didn't endorse Donald Trump. But what are they saying outside the hall? See reaction.