While family members usually use their time at conventions to talk about how great a candidate is, Donald Trump Jr. turned his speech on Tuesday night at the 2016 Republican National Convention into an attack on Hillary Clinton and the policies of the Democratic party during the second half. Earlier, he talked about how his father, Donald Trump, ran his businesses, seeing the potential in the blue collar workers he hired and promoting them.

“He’s recognized the talent and the drive that all Americans have,” Trump Jr. said of his father, who officially became the GOP’s presidential nominee earlier in the night. “He’s promoted people based on their character, their street smarts and their work ethic. Not simply paper credentials.”

In the second half of his speech, Trump Jr. turned his attention to the Democrats, criticizing regulations and the length of the Dodd-Frank Act. He said that the policies of Democrats have made it easier for illegal immigrants and those who legally arrive in the U.S. He also said that Hillary Clinton wants to hire judges who will abolish the Second Amendment and cited the murder rate in Chicago as an example for how strict gun laws do not work. 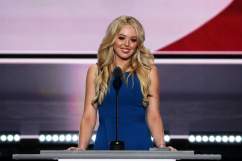 Loading more stories
wpDiscuz
0
0
Would love your thoughts, please comment.x
()
x
| Reply
Donald Trump Jr., the oldest son of Donald Trump, delivered a speech at the Republican National Convention that was more about Hillary Clinton than his father.