“I’m a New Yorker and I know a con when I see one,” Bloomberg said of Trump. He later explained that Trump is a “risky” choice for the country, while Clinton is the “responsible” choice. His role was clearly to appeal to independent voters.

Bloomberg was a late addition to the DNC schedule. It was only on July 24 that the New York Times reported that Bloomberg would speak at the convention and endorse Clinton, despite not being a Democrat. Bloomberg was a Republican when he was first elected Mayor of New York and switched to being an Independent in 2007. Before 2001, Bloomberg was a Democrat.

“As the nation’s leading independent and a pragmatic business leader, Mike has supported candidates from both sides of the aisle. This week in Philadelphia, he will make a strong case that the clear choice in this election is Hillary Clinton,” Bloomberg senior advisor Howard Wolfson told the Times.

Bloomberg had considered running for the White House. However, in March, he wrote that if a three-way race happened, it’s possible that no candidate would get the number of electoral votes needed to become president.

“As the race stands now, with Republicans in charge of both Houses, there is a good chance that my candidacy could lead to the election of Donald Trump or Senator Ted Cruz. That is not a risk I can take in good conscience,” Bloomberg wrote in March. 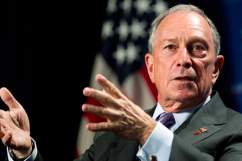