The 10-year-old son of a Kansas state lawmaker was decapitated Sunday in an accident on the world’s tallest water slide at Schlitterbahn, a Kansas City waterpark, witnesses say.

Witness Esteban Castenada told ABC 7 News that he heard booms coming from the Verrukt water slide and then saw a body wash down after the raft. He said he saw that the boy was decapitated.

“Michele and I want to thank the Olathe and Kansas City, Kansas, communities and all our friends and family for their outpouring of support and compassion as it relates to the sudden loss of our son, Caleb Thomas Schwab,” the family said in a statement.

The Verrukt water slide opened in 2014. The ride’s name is German for “insane.” According to the park’s website, the slide sends two to three riders on a raft down a “jaw-dropping” 168 foot high, 7 foot wide structure.

Riders, who are strapped in, are then “blasted back up a second massive hill and then sent down yet another gut wrenching 50 foot drop for the ultimate in water slide thrills,” the park says on its website.

The two to three riders must have a combined weight between 400 and 550 pounds and must be at least 54 inches tall, according to the park. There is no age requirement.

You can watch a first-person video from the slide here:

Officials initially said the boy was 12, but his family says he is 10. The investigation into the accident is continuing and few details about what happened have been released.

1. Witnesses Say They Saw the Boy Go Airborne & Hit Netting After the Slide’s First Drop as He Rode the Ride With 2 Adult Women

Witnesses told KSHB-TV they saw the boy fly into the air after the first steep drop, causing him to hit netting. The nets are set up on the sides of the slide as a precautionary measure.

The witnesses said they saw blood on the ride after the accident. Others told the news station that the harness device wasn’t functioning properly.

The park did not confirm those details, saying an investigation is still underway. Police said the detail of what happened are still being investigated.

Police said Caleb was on the ride with two adult women who were not related to him. The women both suffered non-life-threatening injuries and were treated at a local hospital.

Relatives told WDAF-TV on Monday that one woman suffered a broken jaw and the other received a broken bone in her face. She also had to have stitches in her eye.

Caleb was found dead in the pool at the end of the ride, police said.

The husband of one of the women who were in the ride with Caleb said they are also suffering emotionally. He told WDAF they don’t know exactly what happened because of how fast the incident unfolded.

“The little boy said to a worker, ‘I just saw my little brother die because of one of your attractions,'” Castaneda said.

Casteneda told the news station the boy went to find his mother, who was on another ride.

(The victim) looked skinny. He shouldn’t have been on that ride,” she said.

Video from a news helicopter showed blood pooled at the bottom of the slide.

The fire department was also called to the scene and is “assisting with the death investigation,” according to a tweet from Chief John Paul Jones.

2. Caleb’s Family Says He ‘Brought Abundant Joy to Our Family & All Those He Came in Contact With’

Caleb’s family issued a statement about the accident through their pastor:

Michele and I want to thank the Olathe and Kansas City, Kansas,communities and all our friends and family for their outpouring of support and compassion as it relates to the sudden loss of our son, Caleb Thomas Schwab.

Since the day he was born, he brought abundant joy to our family and all those who he came in contact with. As we try and mend our home with him no longer with us, we are comforted knowing he believed in his Savior, Jesus, and they are forever together now. We will see him another day.

Your continued prayers are welcome and appreciated. We appreciate your understanding of our family’s need for privacy during this difficult time of grieving.

Other family members told WDAF-TV that Caleb loved playing baseball and was very involved in his church.

“They are an amazing, resilient family, full of faith,” Clint Sprague, lead pastor of Life Mission Church, told the Kansas City Star. “They are just grieving their loss right now.”

A GoFundMe account has been set up to help the family with funeral expenses.

Sprague held a press conference Monday on behalf of the family.

“This has been devastating at every level,” Sprague said, according to WDAF-TV. “You know, you leave church, you go to a water park to be with family, and to enjoy. Then you hit tragedy. There’s just no way to prepare for this.”

Sprague said a memorial service will be held Friday at Life Mission Church in Olathe at 2 p.m. It will be open to the public.

3. Scott Schwab Has Been a Kansas State Representative Since 2008 & It Was ‘Elected Officials Day’ at the Water Park

Caleb’s father, Scott Schwab, has represented Kansas’s 49th district since 2008, according to the legislature’s website. A Republican, he was previously the district’s representative from 2003 to 2006.

He works in healthcare sales. He and his wife, Michele, live in Olathe, Kansas. They have three other children. Caleb was their youngest son.

“The primary reason for my desire to serve in the Kansas House is to help create an economic environment for kids like mine to have a future here in Kansas,” Schwab told the Kansas City Star during his 2014 re-election bid.

It was Elected Official Day at the water park, and many other lawmakers were there with their families, KSHB-TV reports.

Lawmakers were given free admission and lunch.

“I would hope that all safety formality had been followed and that sadly this is an unforeseeable accident,” State Senator Pat Pettey, who was at the park and whose daughter and 17-year-old grandson rode the water slide Sunday morning, told the Star. “Human error occurs. If that is the case, I’m sure it will be determined in the investigation.”

Pettey said the ride has been popular since it opened.

“I’m sure thousands of people have ridden it this summer alone,” Pettey told the newspaper. “It’s just a terrible, terrible thing that’s happened. I can’t imagine what it would be like to be at any kind of park and have something like that happen.”

Words can't express how heartbroken I am for them and their 3 boys in this time of devastation.

There may be no greater loss in life than a parent losing a child. May you please keep them in your thoughts and prayers.

My thoughts and prayers are with Rep. Scott Schwab and his family after the tragic loss of his son, Caleb. #ksleg

Our hearts and prayers go out to Rep. Scott Schwab's family on the death of his son Caleb.

Rep Scott Schwab & family, Jason & I were heartbroken to hear of your loss. Prayers w you & our belief that Caleb is in Christ's embrace.

My heart goes out to the Rep Scott Schwab family grieving the death of son, Caleb. Prayers of comfort to the family.and friends.

“It is with an absolutely broken heart we have to ask for prayers for the Schwab family who suddenly and tragically lost their sweet and energetic son in an accident today. No words can express the pain we all feel for this terrible tragedy,” House Speaker Ray Merrick told other members of the legislature in an email. “We will share remembrance details when we receive them.”

4. The Park’s Owner Delayed the Opening of Verruckt & Said It Is ‘Dangerous, but Safe Dangerous’

The 2014 opening of the Verruckt water slide was delayed because of safety issues, KSHB-TV reports. The opening was delayed four times and the park admitted issues with its conveyor system, gearbox and shafts.

“It’s dangerous, but it’s safe dangerous now,” Jeff Henry, co-owner of Schlitterbahn, told USA Today in 2014. “Schlitterbahn is a family water park, but this isn’t a family ride. It’s for the thrill seekers of the world, people into extreme adventure.”

“It’s like jumping off the Empire State Building. It’s the scariest thing I’ve done,” Henry said, after being one of the first to take the plunge.

The park says the ride was recently inspected and has not commented about possible safety issues.

5. Schlitterbahn Was Closed After the Accident & the Verruckt Will Remain Shut Down

Park is shut down, multiple agencies on scene pic.twitter.com/xDxEjhR9jm

The park issued a statement saying Schlitterbahn was closed down after the accident:

We are saddened to share that a young boy died on Verruckt this afternoon. Given that safety is our first priority, we have closed the Kansas City park today and Monday and have closed the ride pending a full investigation. Our thoughts and prayers are with the family during this difficult time.

Guests who were at the park received refunds in cash or gift cards. A state law requires the ride to be shut down after an accident involving serious injury or death.

The park is tentatively set to re-open Wednesday, with the Verruckt remaining shut down.

Park spokesman Winter Prosapio said they don’t know many details about the accident.

She said she doesn’t believe anything like this has happened at the Kansas City park before.

Prosapio did not have any details about procedures the park follows for incidents involving serious injury or death.

“Safety of our guests is a priority. In addition to what happened on the ride, other staff are affected. Our lifeguards are critical. It will be very difficult for them to focus after something like this,” Prosapio told reporters.

One parkgoer told KMBC-TV they were not immediately told to leave.

“The thing that got me was there was no responders. They didn’t make any announcement,” Leslie Castaneda said. “We left 15 to 20 minutes after it happened.”

Schlitterbahn, a family-owned company based in New Braunfels, Texas, operates four water parks in Texas in addition to the Kansas City park. 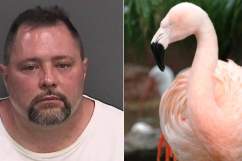 Loading more stories
wpDiscuz
159
0
Would love your thoughts, please comment.x
()
x
| Reply
The 10-year-old son of a local politician was killed in an accident on the Verrückt, billed as the world's tallest waterslide, at the Schlitterbahn Water Park in Kansas.