An 18-year-old recent high school cheerleader was murdered and left by a trail in rural, Michigan.

McKenna Hilton was identified as the victim, whose body was discovered Aug. 18 in the wooded area. Police have not yet said how she died, but she was remembered by friends and family for her beautiful smile and love of animals.

A 16-year-old boy has been detained while police determine whether to file charges against him. The suspect is Hilton’s half brother, said mLive. An open murder warrant was authorized against Savon Schmus, said WoodTV.

On October 30, 2017, “Hilton’s half brother Savon Schmus, 17, admitted to the killing as part of a plea agreement with prosecutors… he was sentenced to between 40 and 100 years in prison.” Hilton’s mother said the court: “I hate you. I will never forgive you. I hope that when you come out of prison, it’s not on your two feet. I hope it’s in a body bag.”

1. Hilton Was a Cheerleader Who Recently Graduated From High School

“Occupation: Princess,” says the cover photo on Hilton’s Facebook page. The community held a candlelight vigil for Hilton. Hilton was in a musical and play at the school, said WoodTV. 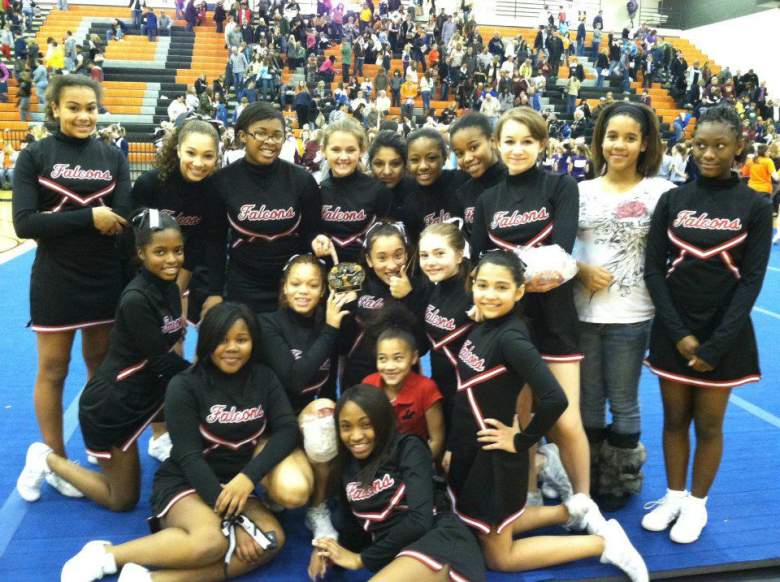 A cheerleading team photo that Hilton posted on Facebook.

The station quoted a statement from the high school as saying, “McKenna was an East Kentwood High School graduate and an outstanding person. Kentwood Public Schools is a close family built on strong positive relationships. We are deeply saddened by this tragic loss.”

2. Hilton’s Body Was Found on a Wooded Trail But She Might Have Been Killed Elsewhere

The Detroit Free Press says Hilton’s body was “found in a wooded area in western Michigan.” The area is located in Grand Rapids Township.

The trail is less than a mile from where the suspect’s father lives, says WZZM13.

Mlive said Hilton “was fully clothed, wearing a white tank-top with horizontal blue stripes and black Adidas running pants. She was also wearing a bracelet with a charm denoting her recent graduation.”

WoodTV said investigators “found injuries around her neck that suggest strangulation” but said they need to await the autopsy results to be sure how she died.

The trail is located near a lake, but the newspaper said authorities believe Hilton was probably killed elsewhere within a day from her body being left on the trail.

3. Hilton Wanted to be a Medical Therapist & Move to New Orleans

The young woman’s obituary describes her as “so funny, bright, fantastic, beautiful, unique, thoughtful, caring, and very much loved.”

The obituary added: “She had a dream of moving to New Orleans and working as a medical therapist.”

Hilton’s obituary says she is the daughter of Stacey Hilton and David Schmus. “She loved animals, especially her dogs, Carl and Chloe,” the obituary said.

A Go Fund Me site for Hilton’s family says, “McKenna was a loving, caring, talented, funny young lady with her whole future in front of her! Words truly cannot express how she impacted so many lives in such a short time!! Her smile would light up a room!”

4. The Boy & Hilton Knew Each Other & Are Half Siblings, Reports Say

McKenna Hilton and the male suspect might have lived in the same household and might be related, news reports in Michigan said. However, those aspects of the case had not yet been confirmed or denied by authorities. However, McKenna and the suspect were friends on Facebook. (Facebook/McKenna Hilton)

According to mlive, police said “the suspect and victim knew each other but would not provide additional details.” Numerous media sites have now reported they are half siblings and say it’s expected that Schmus will be tried as an adult.

The teen is being held in juvenile detention. He is being held for five days while prosecutors consider murder charges, according to WZZM13.

The teenager, who has no juvenile record, lives with his mother in Kentwood, Michigan and attended Crossroads Alternative High School, said WZZM13.

Woodtv, citing a source close to the investigation, said the victim and teenager “had lived in the same household.”

5. Hilton Was Described as a Teenager With ‘Big Dreams’ Who Was Beautiful & Kind

One woman wrote on the Go Fund Me site, “I just worked with her earlier this week. She had BIG dreams and was kind, smart and a beautiful person all around. I will miss seeing her at work. She had a great outlook on life and I’m very sad that she is lost too soon. I wish the best for her family and I hope that her family can heal to the best that one can in this situation.”

Her mother wrote to those who had donated, “Thanky you for showing me how loved my daughter is. We are heartbroken and the heartbreak has just begun. Your caring words are deeply appreciated.”

Loading more stories
wpDiscuz
3
0
Would love your thoughts, please comment.x
()
x
| Reply
McKenna Hilton, 18, was murdered and dumped on a trail in Grand Rapids, Michigan. A teenage boy has been detained as charges are considered.