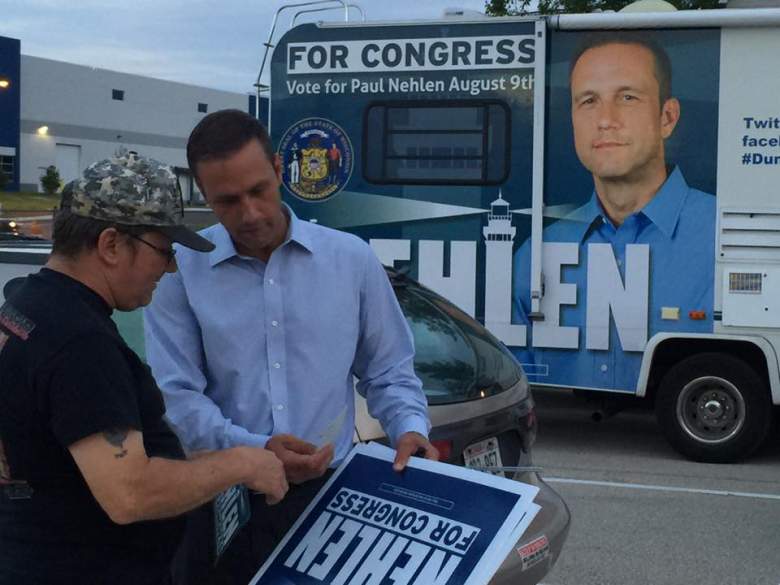 Nehlen launched a fiery challenge to the Wisconsin congressman, attacking his patriotism as he totes around “Make America Great Again” signs and drives a dump truck that urges people to “Dump Ryan” (his campaign says it was vandalized.)  The Green Bay Press Gazette describes Nehlen as a “tattooed motorcyle riding businessman.”

Nehlen lost the primary by about 70 percentage points. Ryan has now announced that he is quitting Congress in January 2019, and Nehlen is vying for the seat. Nehlen caused controversy when he tweeted that many of his critics were Jewish and alleged that Jews are over-represented in the media. The Wisconsin GOP returned his donations and condemned his comments, which were criticized as anti-Semitic. He also tweeted that he was “pro white,” according to Wisconsin Public Radio.

Nehlen received a boost of attention with the primary one week away when Trump, the Republican nominee, said he was not ready to endorse Ryan, 46, even though Ryan endorsed Trump after hedging and sent out a fundraising email in late July that said Trump would “forge a path for real conservative reform,” according to The Washington Times.

1. Donald Trump Refused to Endorse Ryan & Tweeted to Nehlen & Nehlen Said He Is Open to Deporting All Muslims From The Country 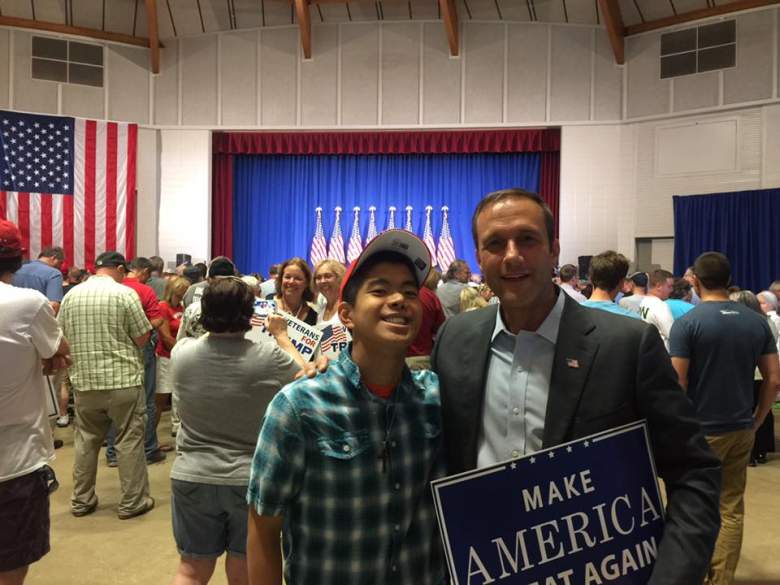 Trump said he was not ready to endorse Ryan and Arizona Sen. John McCain, who is also facing a primary challenge. Trump praised Nehlen, saying he had run “a very good campaign” and said he liked Ryan but “these are horrible times for our country. We need very strong leadership. We need very, very strong leadership. And I’m just not quite there yet. I’m not quite there yet,” according to The Washington Post.

Ryan’s campaign told The Milwaukee Journal Sentinel that Ryan and his campaign had not asked for Trump’s endorsement and were confident of victory.

Trump also tweeted a thank you to Nehlen after Nehlen supported him in his war of words with Khizr and Ghazala Khan, the parents of a Muslim Army captain, Humayun Khan, who died in Iraq. Ryan distanced himself from Trump’s comments on the Khans. According to Politico, Nehlen had tweeted: “Paul Ryan AGAIN Misrepresents Trump Position, This Time on ‘Religious Test’ Brouhaha” and linked to a Breitbart story that called Ryan a “double agent” who is working for Hillary Clinton because he disagreed with Trump on Khan.

Thanks to @pnehlen for your kind words, very much appreciated.

Nehlen’s positions are similar to Trump’s in many ways: “anti-free-trade, tough-on-immigration, reduced-spending agenda, touting jobs he returned to the US from Mexico and Canada,” said Business Insider. Talking Points Memo says that Nehlen is playing the outsider businessman “card” like Trump. The Milwaukee Journal Sentinel called Nehlen a “political newcomer.”

Nehlen told Lou Dobbs that Ryan would be a problem in a Trump presidency who would “thwart President Trump at every opportunity.” Politico says some former Trump staffers are now helping Nehlen and that Nehlen’s campaign cut an interview short when Politico asked about it. Nehlen told Politico he has never talked to Trump and accused Ryan of not showing loyalty to Trump, Politico said. 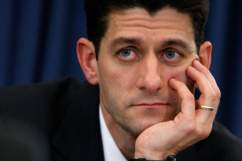 2. Nehlen Trailed Dramatically in Polls By More Than 60 Percentage Points 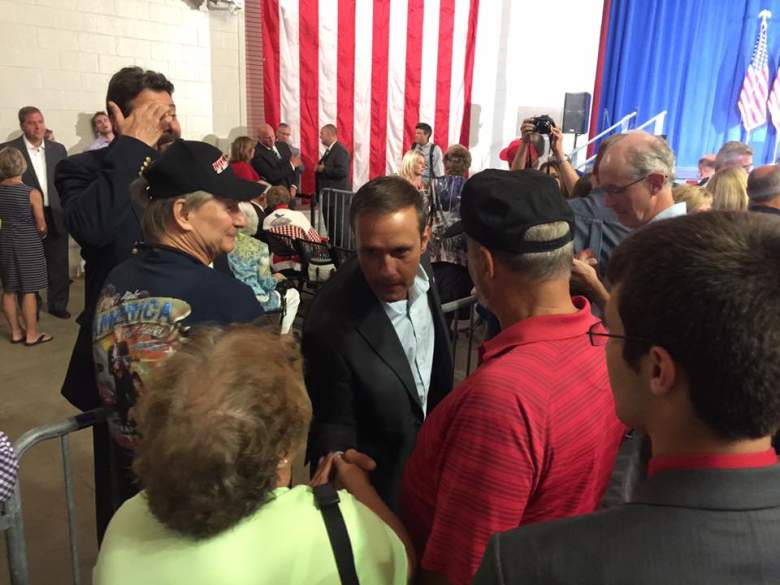 Two polls in May showed Ryan with whopping leads – the incumbent led by a 64% and 73% spread in those polls, according to RealClearPolitics.

In May, The Washington Post reported that a Marquette Law School poll right before the April presidential primary showed that Ryan enjoyed strong support in the First Congressional District. That poll found that 81 percent of Republican and GOP-leaning independent voters had “a favorable impression of Ryan” in his home district. Even one third of Democrats said they liked him, the poll said, according to The Post.

Ryan’s campaign told the Post that he tries to stay connected to his home district and quoted Ryan as saying, “People know me really well in Wisconsin, they know I am going to stand up for my principles that are conservative principles no matter how popular that may be on a given day.”

On his campaign website, Ryan says he is “committed to continuing Wisconsin’s proud tradition of reform-minded leadership in Congress. Since he was elected in 1998, Paul has worked hard for the people of the First District.”

The polls ending up being similar to the final primary results.

3. Nehlen Is Described As ‘Wealthy’ & Once Donated to Paul Ryan

About to hit the road. This will be fun! said the caption on this photo, which ran on Nehlen’s campaign Facebook page. (Facebook/Paul Nehlen)

The Washington Times has referred to Nehlen as “a wealthy businessman with tea party ties.” The Times also said Nehlen was a “successful executive, entrepreneur and inventor who previously donated to Mr. Ryan’s campaigns.”

The Milwaukee Journal Sentinel said that Ryan has outraised Nehlen in campaign donations; Ryan had raised over $5 million in the year’s second quarter while Nehlen raised short of $500,000, said the Wisconsin newspaper. Politico says Ryan has raised $14.9 million since July 20, and Nehlen has raised $868,000.

Nehlen acknowledges he once helped Ryan on the campaign trail but says he was motivated to run against him because he believed Ryan had sold out to “beltway cronyism.”

4. Nehlen Has Called Ryan a ‘Soulless Globalist,’ Questioned His Patriotism & Challenged Him to an Arm Wrestling Match 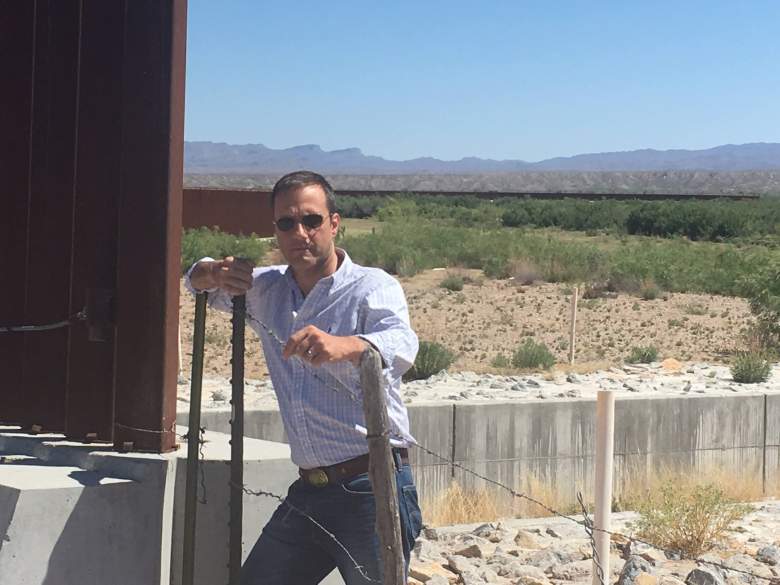 In an interview with Breitbart News Daily SiriusXM host Stephen K. Bannon, Nehlen called Ryan “a soulless globalist from the Democrat wing of the Uni-Party.” He accused Ryan of working for “corporate America,” said he was an “open borders politician” who was “grown in a petri dish in D.C.” and added, “He is all in for the cheapest possible labor for Wall Street. That’s what Paul Ryan’s in for. Paul Ryan’s in for Paul Ryan.”

Nehlen has also said of Ryan: “He is not an American Patriot – he is a Globalist.” In a campaign video, Nehlen challenges Ryan to arm wrestle:

Former Alaska Governor Sarah Palin has warned Ryan that he might be “Cantored,” despite Ryan’s strong approval ratings and polling, referring to former House Majority Leader Eric Cantor, who was ousted in a primary in 2014 by conservatives.

5. Nehlen Is an Inventor With Business Experience Who Is Married 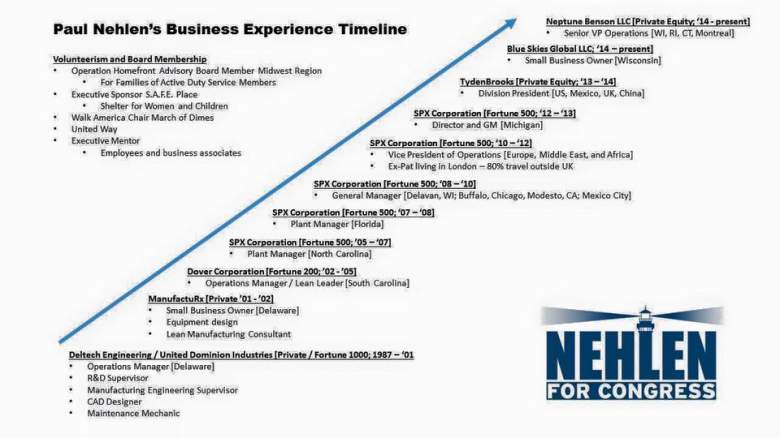 Nehlen and his wife, Gabriela, live in Delaven, Wisconsin, his campaign biography says.

Nehlen’s campaign has placed a timeline of his business experience on his website. From 2005 through 2013, he worked in different positions at SPX Corporation. More recently, he has worked for TydenBrooks, a private equity firm; owned Blue Skies Global LLC in Wisconsin, and been senior VP of Operations for Neptune Benson LLC.

On LinkedIn, he says he has “Significant experience applying proven lean business processes from customer service interactions throughout factories and offices and out to customers and suppliers.”

At Neptune, he says that he performed “Operational and Engineering support for all technologies: filtration, UV, advanced oxidation process.” Neptune is a “manufacturer of high quality water filtration and disinfection products,” says Right Wisconsin, a conservative site that has published anti-Nehlen articles.

On his campaign website, he describes Blue Skies as a company that “leverages key networks and technologies on behalf of the companies with which it partners, in order to ensure that they can deliver outstanding, cost-effective engineered products and projects.”

Right Wisconsin has claimed that “despite repeatedly railing against the use of the so-called H-1B visas (on television, radio, social media), Nehlen’s own company is already importing foreign workers.” The site is spearheaded by Milwaukee talk radio host Charlie Sykes, who is a vocal Trump critic. Milwaukee-area talk radio can be a powerful force in southeastern Wisconsin Republican primaries.