The demonstrator who was shot and killed during the Charlotte riots/protests has been identified as Justin Carr.

Who killed Justin Carr? Police say they have arrested a 21-year-old civilian, Raquan Borum, in his death. Borum is a felon with pending weapons and past drug arrests.

The circumstances of Carr’s death had been murky, as eyewitness accounts diverged dramatically, with some eyewitnesses believing that an officer was responsible and others disputing that and saying the shooting could have stemmed from gang rivalries. (Warning: This post contains graphic photos and video).

Although the city initially said on Twitter that Carr was shot and killed by another civilian, not a police officer, some who were at the scene – including a minister – fervently dispute that. Police Chief Kerr Putney said on September 22 that police were investigating the allegations that an officer shot Carr.

Eyewitness accounts differ, with some saying an officer shot Carr (perhaps with a rubber bullet), although one man wrote that he saw a civilian shoot Carr, and the bullet whizzed past him.

“We’re here to seek the truth,” said Chief Putney. “So, we’re investigating that to find the truth, the absolute truth, as best the evidence can show us.”

Now he says that police believe they have identified Borum as the person who allegedly shot Carr by studying business surveillance video.

1. In Heartwrenching Facebook Posts, Carr’s Mother Called for Peaceful Protests but Borum Has Past Criminal Arrests for Weapons & Drugs 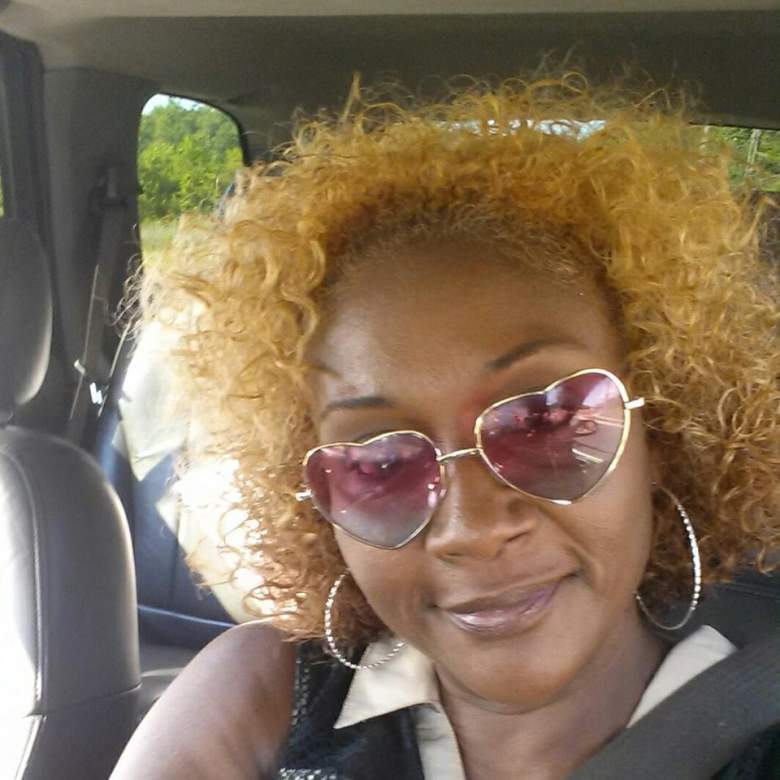 Carr’s mother posted several emotional posts on Facebook after her son was shot. “My baby was shot in the head for no apparent reason!” she wrote, adding, “Please if your gonna protest do it peacefully!”

However, within the same protest crowd was Rayquan Borum, police say, a felon with pending firearms offenses from another county who’d served time in prison for larceny. “Borum served about three months in prison for larceny and breaking and entering charges from Mecklenburg County, and was released in 2012…He also faces at least two pending weapons charges in Cabarrus County,” wrote the Charlotte Observer newspaper.

According to Fox News, Carr “was shot as police in riot gear massed to bar protesters from storming an upscale downtown hotel.”

In another post, she wrote, “I really appreciate the love & support from my Family & friends! Im overwhelmed by so many checking on is! I’m not able to respond to everyone so don’t think I don’t appreciate You! Please continue to keep my Family in Prayer especially my other Son’s & my Mom! Will keep you posted! Trying to hold it together aint easy! But I know I’m not alone! Love yall!”

Several hours before Carr was shot, his mother wrote on another protester’s Facebook page, “Make sure it doesn’t turn violent! We also need to come together as a community and stop killing and hating on each other! They see us killing each other so they think it’s ok for them to do it too! There’s a difference between protesting and acting a damn fool! Do your thing Tre and start this great movement!”

Carr’s cousin wrote on Facebook: “Will be greatly miss and always will be in our hearts mind and soul love ya cuz and will never be forgotten.” 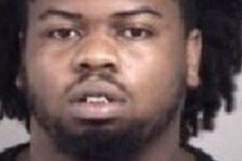 2. Eyewitnesses Disagreed About Whether a Civilian or Officer Shot Carr but One Man Claims He Has Video of Police Firing Into the Crowd

Video (above) captured the chaotic scene outside the Omni where Carr was shot, including the immediate attempts to tend to him after he was wounded.

However, there are conflicting accounts from civilians at the scene about who shot Carr.

“I saw the man go down on the pavement,” said Minister Steve Knight of Mission Gathering Christian Church in Charlotte, in a statement posted on Twitter. “It was an ambush. The victim was shot while he stood between two ministers, and we believe he was shot by police.” 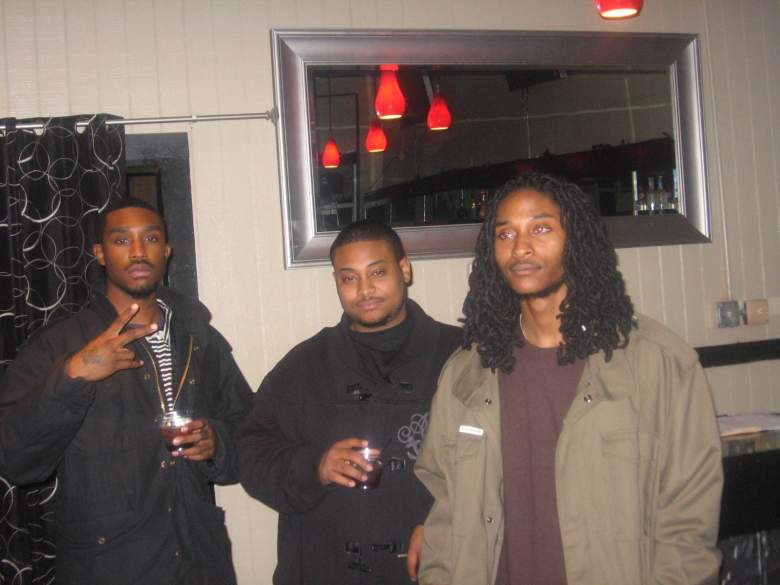 One man posted on Facebook that he has video showing police firing into the crowd shortly before Carr fell. That man, Todd Zimmer, wrote:

I was there when CMPD shot a protester in the head tonight. I am convinced that police shot this person with a rubber bullet or a tear gas canister. I stood over the injured person while folks tried to revive them, tried to keep folks back. I have captured video of police firing into the crowd seconds before the person fell. I didn’t want to post about this, but my city is lying about what happened tonight. Let the record show.

Zimmer posted a picture of the bloody pavement with his account. You can read it here:

Zimmer has not released the video publicly, however.

Another eyewitness, a defense attorney named Kahran Meyer, told the blog Photographyisnotacrime.com: “It wasn’t a gunshot. It was much louder. It wasn’t a civilian injury.” You can read her account here.

I watched a man die tonight with my own two eyes. It was NOT by a civilian. I don't care WHAT CNN tells you.

I was right fucking there.

However, Ryan James, an eyewitness writing for The Daily Beast, wrote for that publication, “Around 8:30 p.m., a civilian fired a pistol indiscriminately into a crowd of dozens outside the hotel, turned and ran, leaving a man laying on the ground in a pool of blood on the sidewalk. There was a loud pop, then panic and confusion. Standing about 10 yards away, I looked down the barrel of a pistol.”

At another point in the article, James wrote, “The shooter, a black male, was standing at the intersection of East Trade and South College streets with the weapon still aimed. He turned and ran.”

James wrote that the bullet whizzed past him.

A homeless Army veteran named Jerome who was standing a few feet away told Esquire the shooting may have stemmed from rival gang members being nearby each other, adding: “There was a lot of pushing and shoving. Then someone raised up with a gun. Pow!” Esquire wrote of a group of street preachers and ministers, “They dismissed rumors that police fired the bullet that landed in the still-unnamed man’s head.”

Esquire quoted street preacher Sam Bethea as saying, “They blew off the top of his head. And that’s when I started saying my prayers.” A news reporter performed CPR, the magazine said.

3. Dramatic Photos Showed Carr Being Tended to at the Scene & Pastors Reconsecrated the Ground 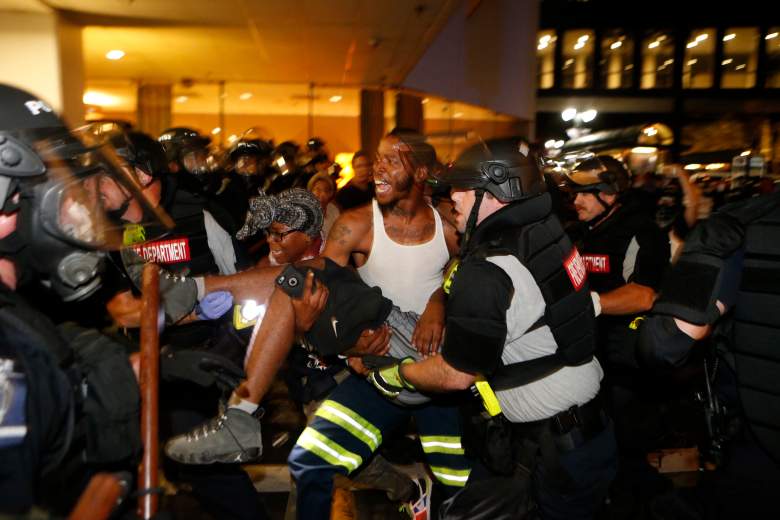 Police and protesters carry a seriously wounded protester into the parking area of the the Omni Hotel during a march to protest the death of Keith Scott. (Getty)

Photographs showed Carr being carried from the scene and captured him lying bloodied on the ground. People on Twitter questioned how police could not know who shot Carr with so many eyewitnesses at hand.

So #JustinCarr is dead, shot in front of dozens of police officers, & there's no suspects in this "citizen-on-citizen" shooting? Seriously?? https://t.co/ZabxE2152n

Pastors held a group prayer outside the Omni on Thursday, reconsecrating the ground where Carr died.

Pastors in #Clt leading a large grp in prayer to re-consecrate ground outside Omni where protester was shot #KeithLamontScott @WBTV_News pic.twitter.com/n8Ztrz8PAS

Rev. Robin Tanner was one of the ministers at the scene when Carr was shot, although she did not see who shot him. She called the scene “chaos” and said, according to qCityMetro: “They marched us down into the Omni… And then we saw people began to be struck with the clubs, we saw people falling and hitting the floor. We heard a shot. People began to run.” 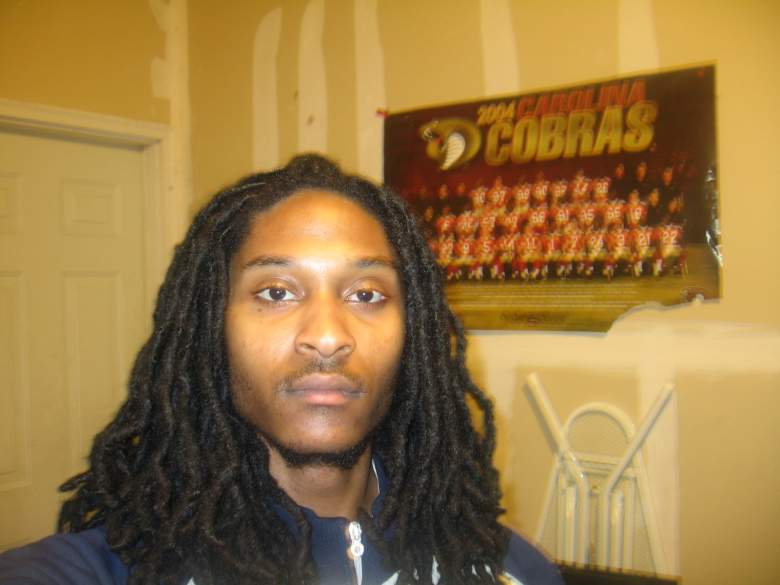 The city of Charlotte tweeted shortly after Carr was shot that a “civilian” had wounded him. The chief said that a suspect was arrested on Friday morning, according to ABC.

ALERT: Fatal shot uptown was civilian on civilian. @CMPD did not fire shot.

The city said on Twitter that Carr was in critical condition and on life support after the shooting, which occurred on Wednesday evening. However, he died Thursday, September 22. You can watch the police chief speak about Carr’s death on Thursday here:

Chief Putney said, “The shooting that took place, there’s a lot of information about who did that shooting. We’re reviewing video, and we’re assessing our people who were there as well because an allegation was made that one of our officers might have been involved.”

5. Carr Studied at a Community College

The Facebook page of Carr, who goes by the nickname Jroc, says he is in a relationship and studied at Central Piedmont Community College.

He’s also had run-ins with the law in the past. 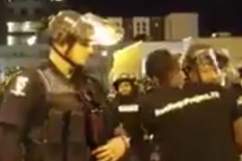