Five people were slain by an active shooter at Cascade Mall in Burlington, Washington on September 23. The shooter was still at large for a day, and police released a photo of him.

Although earlier media reports had identified him as Hispanic, on Facebook, he says that he was born in Turkey. You can see photos of Cetin here:

Four women – ranging in age from a teenager to seniors – and one men were killed, said King5 News.

Police had said they thought there was one gunman on the loose.

One other person was also shot in the attack.

Police said the shooter was armed with a rifle:

Here is the shooter. We believe just one shooter. Notify authorities if you see him. Armed with rifle. pic.twitter.com/GXeWCPYnx5

A description was released of the suspect:

You can watch live news coverage from a local television station above.

According to ABC News, the gunman was armed with a rifle when he opened fire around 7 p.m. Washington time. ABC said three women and a man were shot. KIRO7-TV said five people were shot altogether. Police and Homeland Security helicopters were helping search for the shooter; KIRO reported that the Homeland Security chopper was there for officer safety.

According to USA Today, two of those shot were elderly women. USA Today quoted Joe Zavala of Blaine, Wash., an eyewitness who said, “I saw a man pointing a gun and shooting people” before Zavala took off running.

According to KHOU-TV, the shooter “was last seen walking towards Interstate 5 from the mall.”

Still no indication that #CascadeMall shooter has been apprehended. Looks like police choppers still searching.

Here is a fuller photo of the gunman through a surveillance photo released by police:

Image of #Burlington shooter released. Be on the lookout police saying lock your doors and windows. #CascadeMall pic.twitter.com/RhmRLeEdBR

All of the victims were found in the Macy’s store:

The mall was secured and swept several times, according to the live television reports. The mall is located about 65 miles from Seattle, according to CNBC. A fourth victim was critically injured, leading some reports to initially say that four people had died, CNBC said.

The shooting comes after a mass stabbing at a mall in Minnesota and the explosion of an IED in New York’s Chelsea neighborhood. The Minnesota mall stabbing suspect, Dahir Adan, was shot and killed in the Macy’s store there by an off-duty police officer and concealed carry advocate. ISIS claimed responsibility for the Minnesota mall attack, and federal authorities were investigating it as potential terrorism.

There was a massive law enforcement response to the Washington State mall.

The motive for the Washington attack is not yet clear. 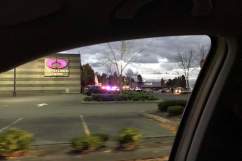 Read More
Breaking News, mass shooting, Washington
wpDiscuz
9
0
Would love your thoughts, please comment.x
()
x
| Reply
Watch live coverage of the search for the Cascade Mall active shooter in Burlington, Washington near Seattle and see the photo of the gunman.