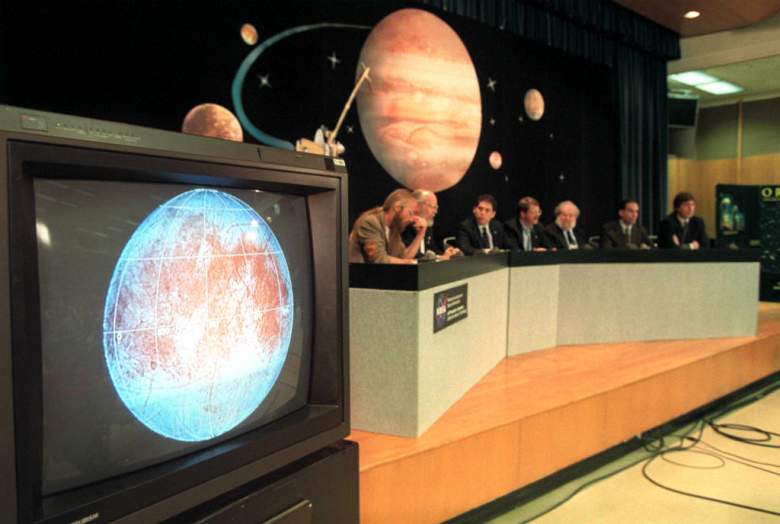 Scientists from the Jet Propulsion Laboratory present a video, 09 April in Pasadena, of images of Jupiter’s frozen moon Europa taken by the Galileo spacecraft. NASA is making a big announcement about Europa today. (Getty)

This afternoon, NASA is making an announcement that could change our understanding of space and other planets dramatically. NASA teased the announcement in a press release, saying they were going to hold a teleconference on Monday, September 26 at 2 p.m. Eastern where they share evidence of “surprising” activity that could be related to an ocean on Europa. Europa is one of Jupiter’s moons, long rumored to one of the best possible sources of alien life.

Unlike some press conferences, NASA isn’t currently planning to do this one by video. It will be a teleconference with the media, but the audio of the announcement will also be streamed live.

You can listen to NASA’s teleconference live stream here starting  at 2 p.m. Eastern.

The findings show the possibility of subsurface oceans on Europa. The astronomers who will be speaking during the live stream are Paul Hertz, director of the Astrophysics Division at NASA Headquarters in Washington; William Sparks, astronomer with the Space Telescope Science Institute in Baltimore; Britney Schmidt, assistant professor at the School of Earth and Atmospheric Sciences at Georgia Institute of Technology in Atlanta; and Jennifer Wiseman, senior Hubble project scientist at NASA’s Goddard Space Flight Center in Greenbelt, Maryland.

Although you may think this announcement is related to NASA’s Juno spacecraft currently orbiting Jupiter and taking photos, it’s not. The revelation comes from new images captured by NASA’s Hubble Space Telescope, NASA announced.

NASA also said in a tweet that they did not find life on Europa.

Speculation about the source of NASA’s announcement is widely varied. Some are wondering if NASA has found more evidence of water vapor. Back in 2013, Hubble observed water vapor over the south polar region of Europa, which could indicate water plumes erupting from the surface. This backed up previous findings, NASA shared, that indicated there could be an ocean under Europa’s icy crust. Additional water vapor observations could provide evidence that the plumes are coming from a subsurface ocean. The vapor could be investigated to determine its chemical makeup without drilling through the ice, indicating if the oceans might be potentially habitable, NASA reported.

Loading more stories
wpDiscuz
0
0
Would love your thoughts, please comment.x
()
x
| Reply
NASA is making a big announcement about Europa today. Find out how to stream the announcement live and what time the findings will be presented.