The latest television appearance for Libertarian Party presidential nominee Gary Johnson is once again calling into question whether he has the foreign policy knowledge necessary to be considered a serious candidate for office.

Johnson and vice presidential running mate Bill Weld were guests on MSNBC for a town hall forum in which they were interviewed by Hardball host Chris Matthews about a number of domestic and foreign policy issues. During the interview, Matthews asked Johnson:

As Johnson visibly struggled with the question, Weld interjected and named the recently deceased Shimon Peres, to which Matthews clarified: “I’m talking about living.”

Johnson then stated “I guess I’m having an Aleppo moment” referring to when, earlier this month, he stunned hosts and viewers of MSNBC’s Morning Joe by asking “What is Aleppo?” to a question from guest co-host Mike Barnicle as to how, if elected, he would handle the ongoing humanitarian crisis in Aleppo, Syria.

Matthews, unsatisfied with the response pushed Johnson, saying “But I’m giving you the whole world. Anybody in the world you like. Anybody. Pick a leader.”

To which Johnson responded: “The former president of Mexico.”

When Matthews asked Johnson to clarify with “Which one?” Johnson responded “I’m having a brain freeze.”

Weld, in an attempt to help his running mate, began to list names, and when he mentioned (Vicente) Fox Johnson said “Fox! Thank you!”

The exchange comes on the heels not only of the “What is Aleppo?” exchange, which raised eyebrows about Johnson’s capability to recognize and handle the foreign policy requirements of president, but also after an unusual exchange with NBC correspondent Kasie Hunt last week in which he stuck his tongue out while speaking to prove a point.

Johnson is currently polling at 13% according to Quinnipiac University, and although he will be on the ballot in all 50 states he will not be included in the presidential debates alongside Clinton and Trump, as the threshold for debate inclusion is 15% in national polling.

While Johnson will not be included in the presidential debates because he has polled below the 15% threshold, he is moving forward with his campaign and may even benefit from his latest “Aleppo moment.”

Johnson told Bloomberg during an interview last week that his “What is Aleppo?” flub actually had a positive impact on his fundraising efforts; he stated that his single highest fundraising day was the day of the Aleppo incident, and the second biggest was the day immediately following the interview. 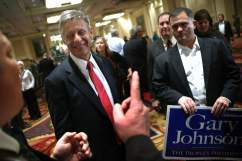