An unidentified woman at a Bill Clinton rally in Canton, Ohio, on Wednesday held aloft a shirt inscribed with the slogan, “Bill Clinton is a rapist,” and yelled at the former president, “Bill Clinton harms women,” according to reports out of the rally where Clinton was campaigning on behalf of his wife, Democratic presidential nominee Hillary Clinton.

Clinton, who served as United States president from 1993 to 2001, appeared to handle the aggressive heckling without losing his cool. A video of the incident is below. Clinton was speaking to a union audience at the Ironworkers Local 550 Training Center in Canton.

A different version focusing on Clinton’s response is included in the following Twitter posting.

@ajjaffe and here's @billclinton's response to the protester holding the "Bill Clinton's a Rapist" shirt: https://t.co/jzoU64OIPP

Here is the woman holding the shirt.

The woman, who was led out of the facility by security personnel, held up the shirt with the writing — apparently inscribed by hand on the shirt with Magic Marker — facing away from the former president and toward the press gallery. As a result, reporters in attendance were unable to determine whether Clinton knew that the heckler was labeling him “a rapist.”

However, according to one report, the woman audibly shouted “He has raped women! Bill Clinton is a rapist!”

The pro-Clinton audience drowned the lone heckler out with applause and chants in favor of Clinton, with some audience members yelling, “Get out!” at the woman.

“I love it when people come into my rallies, and it’s a dead giveaway when they don’t want to have a conversation, because they know they’ll lose,” Clinton said from the stage, according to a Washington Post account.

Clinton’s stop at the union hall was his final appearance on a two-day tour of Ohio where he spoke in mainly working class areas, may of which have been slow to warm to Hillary Clinton in her run against Donald Trump for the presidency. 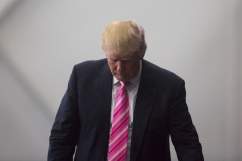 Donald Trump Full Bankruptcy Documents Now Online: What Do They Say About His Finances?

But after struggling in the state at least since late August, the Democratic nominee is showing signs of turning the corner in Ohio, which is considered a must-win state for the Republican Trump.

According to FiveThirtyEight.com founder Nate Silver, Clinton has numerous avenues to win the required 270 electoral votes, even if she loses Ohio.

But without a victory in that state, Trump’s outlook looks bleak.

The FiveThirtyEight.com projection for how the Ohio vote will turn out now favors Clinton, albeit by a razor-thin margin of 46 percent to 45.5 percent for Trump, with Libertarian Party hopeful Gary Johnson registering 7.3 percent of the projected vote total. 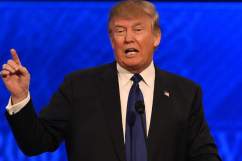 Loading more stories
wpDiscuz
5
0
Would love your thoughts, please comment.x
()
x
| Reply
Bill Clinton responds to a heckler who called him "a rapist" at a rally in Canton, Ohio, Wednesday.