Trump says if he had been president at the time, Capt. Humayun Khan would still be aliveDonald Trump says his policy of a Muslim ban has "morphed" into extreme vetting and argues that Hillary Clinton would let dangerous Muslim immigrants into the country. Follow our complete coverage of the 2016 race for the White House at pbs.org/newshour/tag/vote-2016/ Watch the full debate at: youtube.com/watch?v=IcNyCmBTJCY2016-10-10T01:53:59.000Z

During the second presidential debate Sunday night in St. Louis, Missouri, Donald Trump made the extraordinary claim that if he had been president in 2004, slain American soldier Captain Humayun Khan “would be alive today.” Khan, a 27-year-old officer in the United States Army, died in Iraq on June 8, 2004, attempting to stop a suicide bomber from attacking his fellow troops.

Khan was a Muslim who was born in Pakistan, but emigrated to the United States at the age of two with his family.

Khan’s father, Khizer Khan, spoke at the Democratic National Convention, where he attacked Trump, holding up a pocket copy of the U.S. Constitution to prove his point that Trump, he said, doesn’t know what’s in it. Trump has proposed barring Muslims from entering the United States — though at Sunday’s debate he said that his proposed ban “is something that in some form has morphed into extreme vetting.”

Following the DC, Trump plunged into a protracted, public feud with the Khan family.

At Sunday’s debate, Trump revisited the Khan controversy, saying — as seen in the video at the top of this page — that Captain Human Khan would not have died had Trump been president at that time. He was attempting to contrast himself with his Democratic opponent Hillary Clinton, who voted in favor of a resolution authorizing the United States to use military force in Iraq, a measure that paved the way for the U.S. invasion.

“I was against the war in Iraq,” Trump asserted, adding that his claim to have been an opponent of the way when it began has not been “debunked.” But as fact checkers quickly pointed out, Trump did, in fact, publicly support the invasion when it occurred and for more than a year after. 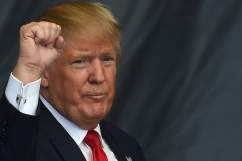 “If I were president at this time, he would be alive today because unlike her, who voted for the war without knowing what she was doing, I would not have had our people in Iraq. So he would have been alive today,” Trump said during the debate, referring to the late Captain Khan.

The slain soldier’s father quickly responded, in a statement to NBC News.

“We know that our son, Captain Humayan Khan, is an American hero. We also know that Donald Trump is not telling the truth when he says he was against the Iraq war,” Khan said in the statement. “Our son served this country with honor and distinction, and gave the ultimate sacrifice. The only thing that Donald Trump sacrifices is the truth.”

Khans on Trump's comments about Cpt. Khan during #debate: "The only thing that Donald Trump sacrifices is the truth." pic.twitter.com/PDbj9ThJzL

“Donald Trump, you are asking Americans to trust you with our future. Let me ask you: Have you even read the U.S. Constitution? I will gladly lend you my copy. In this document, look for the words ‘liberty” and “equal protection of law,” Khan said in his brief address. “Have you ever been to Arlington Cemetery? Go look at the graves of the brave patriots who died defending America — you will see all faiths, genders, and ethnicities. You have sacrificed nothing and no one.”

In an interview later, Trump responded to Khan, saying, “I think I’ve made a lot of sacrifices. I work very, very hard.”

Khizr Khan blasted back at Donald Trump's claim that Khan's son "would be alive today" if Trump were president.