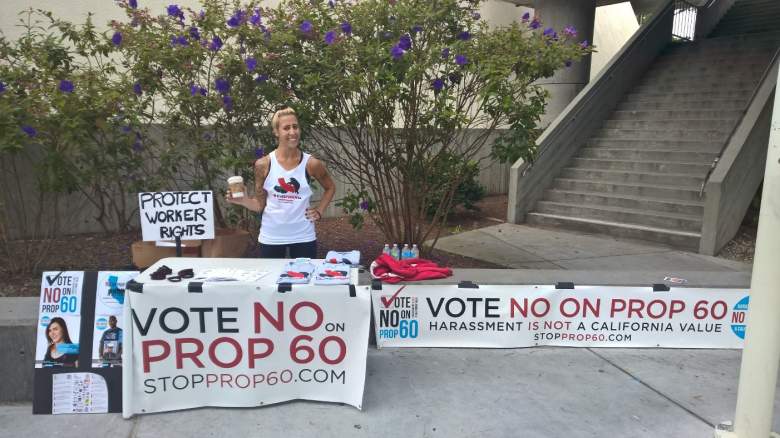 According to several members of the industry and other highly-recognized organizations, the public is not well-informed on what the proposition is truly about, in fact in many cases it seems they’re being outright misled. They also believe the intentions of the man heading the bill, Michael Weinstein, are strictly monetary.

Heavy spoke with several people fighting the messy and complicated proposition, and they’ve made a strong case.

Here’s what you need to know about “Prop 60,” what it entails and the serious impacts that could follow:

1. The Proposition Entails Far More Than Just ‘Wearing Condoms,’ Would Give Personal Information to Stalkers & Opens the Door to Frivolous Lawsuits

Though condoms have been required in adult sex films through the Occupational Safety and Health Administration (OSHA) for years, the law isn’t strictly enforced, and the agency only responds to complaints rather than actively searching for violators. The Los Angeles Times reported that only four production companies were fined in relation to the law in the last two years.

But Prop 60 entails far more than enforcing condom standards. It also threatens the safety of the approximate 2,000 adult film stars in the state of California, while opening up the industry to seemingly unjustifiable lawsuits.

Heavy spoke with adult film star “Stefani Special,” who explained that the proposition also opens up the entire adult industry to frivolous lawsuits by any citizen who resides in California. “If a condom isn’t visible in one frame of the video, not even if it was used, but if it simply isn’t visible, which often times they [condoms] are edited out or makeup is used to hide them, we’re threatened with being sued,” she said. “We’re thinking that there will be frivolous lawsuits and overzealous fans filing lawsuits. But what we’re most scared of is that Michael Weinstein and the company he runs, AHF [Aids Healthcare Foundation], will be the main people filing the lawsuits.” Stefanie went on to say she does have a lot of respect for AHF for standing up for people with AIDS whom faced quarantine in the 80’s, and while they have done a lot of good things, Weinstein has recently gone “rogue for financial reasons.”

Mike Stabile, Communications Director for the Free Speech Coalition, told Heavy that the lawsuits are what’s most concerning to him, and highlights the fact that different entities oppose the proposition. He stated:

Prop 60’s lawsuit component, which allows any private citizen to file a complaint with Cal/OSHA and — should Cal/OSHA not respond, or not find justification to proceed — allow anyone with a laptop to file for-profit lawsuits against anyone in the production chain, from producers and agents to the performers themselves. This would also give tremendous power to one man, proponent Michael Weinstein, to enforce and defend the law, even over the objections of the state government and health departments.

Another disturbing fact that the industry would be faced with in the proposition is the ability for any citizen to have easy access to their private information, by simply opening up a lawsuit. Unlike most lawsuits, which contain a discovery period, Prop 60 doesn’t allow for the extra time, and soon after someone files a lawsuit, whether it’s legitimate or not, they will be able to find out addresses and other personal information. “It immediately becomes part of the public record, and there isn’t any real way to prevent that,” Stabile told Heavy. And though this pertains to directors of the films, many times the directors are also the performers. “Part of that is because, contrary to the thought that most films are made in elaborate studios, in reality performers produce most of their own content,” Stabile said.

The ability to get personal information about the film stars they worship would inevitably lead to many stalkers and others with bad intentions to file lawsuits, solely to acquire files in order to access the star’s home addresses.

2. The Last HIV Outbreak in the Industry Was 12 Years Ago, Contrary to a Misleading Commercial

The tests the industry uses are the best money can buy, Ela Darling, an adult film star who also serves as President of the Adult Performer Advocacy Committee told Heavy. “All performers are tested every two weeks, and we use the best tests available. I mean the window period for the HIV tests we use is less than two weeks,” she said. “Which is something I think a lot of people don’t realize. I don’t think most people realize we have testing protocol at all. We get tested for infections every two weeks. There has not been an HIV transmission linked to the industry for 12 years. People only have a comprehension of HIV testing that they’ve experienced…for instance, tests taken at free clinics can take up to six months to come back.”

Darling also said that commercials like the one above are misleading to the public, because there have not been any industry transmissions of HIV in 12 years. She said that the people claiming they were infected while performing, like in the above video, are either confused or being dishonest. “None of their filming partners ever tested positive, period,” she said. “I personally saw the test of one of the film partners of a person claiming this, and it was negative. That wouldn’t be possible if they actually contracted HIV while filming.”

Senator Mark Leno (D-San Francisco) stated the following in a letter to the California Democratic Party, in part:

I urge the California Democratic Party to OPPOSE the pending Safer Sex in the Adult Film Industry Act ballot measure [Proposition 60]. The proponents of the initiative claim they are seeking to enhance safety protocols in the adult film industry. However, the measure could cause significant harm to adult film performers, subject them to a vast array of unprecendented third-party lawsuits, and erode critical privacy protections. Our party has regularly spoken up when workers have been the targets of ill-conceived or poorly drafted initiatives. This pending measure could have far reaching adverse effects on adult film workers and they deserve the same attention that we have shown to other workers.

4. Weinstein’s Main Motive Appears to be Money, & He Isn’t Allowing the Industry to Comment

The general consensus of those who oppose Prop 60 is that Weinstein is only pushing it to make a profit.

The complaints would first go to OSHA, and if they either don’t find grounds to pursue the complaint, or don’t have time, then whoever that complaint is against will face lawsuits, which Weinstein is heading.

Darling believes Weinstein is setting up OSHA to fail for his own financial gain.

“The bill decreases the amount of time that OSHA has to respond to a complaint,” Darling told Heavy. “They just won’t have time…if they’re overwhelmed and inundated with complaints, which is very likely. Or if they dismiss it because it’s either frivolous or not relevant, in either of those cases when they exercise their judgement, which they are a governmental organization that we have chosen to do this….if they don’t agree to move forward and say ‘hey look, it’s fine,’ if you file a complaint and OSHA does anything except fine people, then you can sue them. OSHA doesn’t exist just to regulate the porn industry, so they’re going to be completely overwhelmed especially when it’s a financial incentive that is going to bring the complaints on. So imagine the lawsuits that will come…they [Weinstein and his team] literally have no respect for this workforce.”

Darling also explained, in addition to several other sources Heavy spoke with, that Weinstein is refusing to give anyone in the industry a chance to voice their concerns.

Weinstein is vehemently ignoring our voices…we have reached out to him so many times. We have gone to their front door, we have called press conferences. We have also tried personal one-on-one private discussions. We have tried every possible thing we can and they refuse to listen to us, while still claiming to speak for us. We are by definition adults, the adult industry, and we have voices and we can speak for ourselves…but you need to listen. If you think someone is at risk you won’t help them by speaking for them, you help them by allowing them to speak for themselves and amplifying their voices. But that’s just not what they do. They silence our voices as much as possible. They imply that we’re these ignorant children who can’t make their own decisions about their bodies or that we just have no respect for our bodies…and that’s just so, so wrong.

Weinstein’s office did not respond to a request for comment at the time this article was published.

In addition to being offended by the bill itself, they also feel that their rights are being violated. Many do not believe in the use of condoms for various reasons. Film stars expressed to Heavy that a major reason many oppose condom use is because it can make them even more susceptible to disease, as they cause friction and subsequent tears. They believe that because they’re tested every two weeks for all sexually transmitted diseases, that it should be their right to choose whether to use a condom.

Film star “Sasha Heart” said it should be an individual choice.

“This is something we’re not opposed to entirely, but we do get tested every 14 days,” Heart said. People in the public, let’s be honest…they only go to the doctor when something is wrong. Weinstein is actually going against our civil rights as performers.

Heart also said she is extremely concerned about the future safety of performers if the bill is passed, and finds the idea of frivolous lawsuits unacceptable. She stated:

Weinstein would make it so that we’re in jeopardy, our safety, our families. 70% of performers control the production and distribution of work. Prop 60 punishes them for that by making them liable to lawsuits by any of the 38 million California residents. There are people voting yes on this because they think it’s just a condom law. They don’t know the facts and how much this could hurt us.

Heart attended a walk to protest the bill, and wears a bracelet to encourage awareness on what the proposed bill really entails. “People ask me about it, and they think it’s all about condoms,” she said. “They say, I’m voting yes for you, don’t worry! And I’m like…no, DON’T! You don’t understand. You’re taking our rights away and you’re basically saying that you can take my safety away. What you don’t understand is that you’re completely uneducated on what they’re really doing. You’re going to give Weinstein a seat in the government while he is paid to tear apart all of these people’s lives. It’s wrong, it’s so wrong.”
Click here to see photos of porn stars fighting the ban.