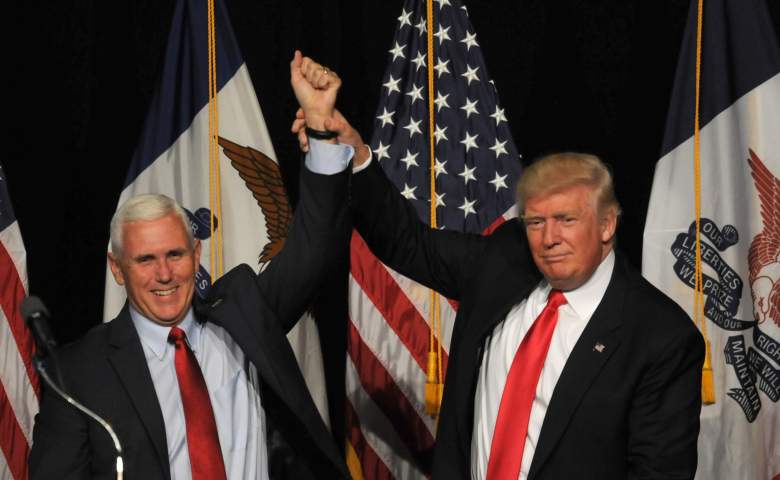 The crassness of Donald Trump’s comments about women on an old videotape that surfaced October 7 spurred at least one prominent former Trump supporter – Jon Huntsman, former governor of Utah – to call for Trump to drop out and let Mike Pence replace him at the top of the ticket.

Huntsman is not alone; a few other Republicans are also openly calling for Trump to step down, a few top Republicans said they won’t vote for him anymore, House Speaker Paul Ryan booted Trump from a Wisconsin campaign appearance scheduled for Saturday, and there’s a flurry of wild speculation about whether Trump could drop out on Twitter. Rep. Mike Coffman, a Republican from Colorado, also called for Donald Trump to step down.

There’s a mechanism for such a process but, at this late in the game, it would be exceptionally tough, unprecedented, and unlikely.

GOPers looked at the ballot rules on replacing Trump during the Khan meltdown. Bottom line: if he didn't vacate by Sept 1, they were stuck

News that Trump would suddenly give an unusual late-night taped statement from Trump Tower on the evening of October 7 ratcheted up the speculation. However, the statement turned out to be a defiant apology (and a promise of sorts to bring Bill Clinton’s past into the race).

Around midnight, Trump released the videotaped statement, which started, “I’ve never said I’m a perfect person nor pretended to be someone I’m not. I’ve said and done things I regret. And the words released today on this more than a decade old video are one of them. Anyone who knows me knows this words don’t reflect who I am. I said it, I was wrong, and I apologize.”

After apologizing for the words he said about women in 2005 on the Access Hollywood tape, Trump also said Bill Clinton has “actually abused women” and alleged that Hillary had “bullied, attacked, shamed, and intimidated his victims. We will discuss this more in the coming days. See you at the debate on Sunday.”

Trump issued a written statement earlier Friday evening making it clear he will be at Sunday’s second presidential debate. Trump said that he will be spending Saturday in New York in “debate prep with RNC Chairman Reince Priebus, Gov. Chris Christie, and Sen. Jeff Sessions” before flying to St. Louis for the 2nd presidential debate on Sunday. The controversial videotape, which was first published by The Washington Post, included such comments as Trump saying to Billy Bush, then of Access Hollywood, that stars can do whatever they want with women, even “grab them by the p–sy.”

A few other prominent Republicans were also calling for Trump to drop out as outrage grew over the Bush tapes:

I'm horrified by #TrumpTape news. @realDonaldTrump campaign is a poisonous mix of bigotry & ignorance. Enough! He needs to step down.

Oddsmakers rated the scenario slightly more likely. But only slightly.

Odds of Trump dropping out before election have increased four fold. But just to15%. pic.twitter.com/NsxzNHAEx7

Such a scenario would be completely unprecedented (and fraught with near impossibility in practical terms) in a campaign already dominated by the unheard-of, but it’s generating rampant speculation on Twitter, especially as Trump was reportedly disinvited by House Speaker Paul Ryan from appearing at the Saturday rally in Wisconsin, had been absent for 24 hours from Twitter, and has faced withering criticism from even some supporters.

Here's to hoping that Trump's twitter silence is him preparing a statement that he is dropping out of the race.

Huntsman had endorsed Trump. On Friday night, he urged Trump to drop out of the presidential race after the Bush tape was exposed by the Washington Post. The Salt Lake Tribune said that Huntsman’s “reversal” on Trump came one week after he explained why he was supporting the New York mogul.

Now, Huntsman wants Trump’s running mate Mike Pence to take over. Pence, of course, is coming off of a much lauded turn on the vice presidential debate stage. 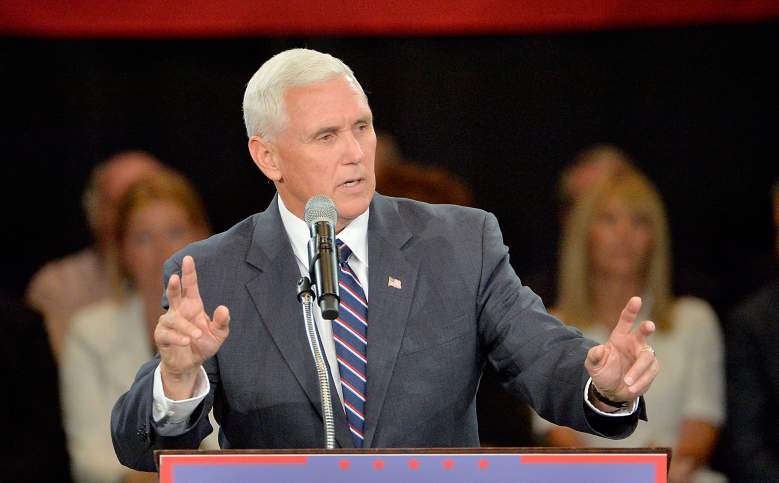 “In a campaign cycle that has been nothing but a race to the bottom — at such a critical moment for our nation — and with so many who have tried to be respectful of a record primary vote, the time has come for Governor Pence to lead the ticket,” Huntsman said, according to the newspaper.

That development was followed a post from Erick Erickson, the conservative pundit who is notorious for his fervent Trump opposition, in which he claimed that Trump was having a crisis meeting on October 7 with his family and top Republican party officials in New York. This account was unconfirmed.

Writes Erickson, “…it is too late to really act. Nonetheless, tonight there are people telling Trump if he does not hand the keys over to Mike Pence, he will lose and his post-loss business and reputation will be irreparably harmed.”

Others who had said before that they were voting for Trump now say they aren’t.

Donald Trump's statements are beyond offensive & despicable. While I cannot vote for Hillary Clinton, I will not vote for Trump. #utpol

BREAKING: Rep. Jason Chaffetz, R-Utah, tells @fox13 he has withdrawn endorsement of @realDonaldTrump after comments about women made public

Others thought Pence should drop out instead.

Forget Trump dropping out, if Pence doesn't drop out he's the biggest POS ever.

Some Democrats hoped that Trump would not drop out.

Not sure Trump dropping out would be the best thing. Mike Pence, who is just as dangerous on policy, might have better shot at winning.

Some thought this was all ridiculous speculation about something that would never occur.

Donald Trump isn't dropping out. You've got to be kidding

The notion is, admittedly, far-fetched. For one, early voting has already started in some states, as these voters pointed out to the speculators on Twitter:

Problem with GOPers talking "Trump dropping out"?
People have already voted, like yours truly.
It's too late to turn back now.

People have been voting for weeks. Trump isn't dropping out of the race.

In fact, President Barack Obama highlighted early voting when he cast his ballot on Friday, October 7.

There’s the question of ballot access. Trump has weathered many controversies before, including about lewd comments relating to women. In fact, in August, there was a flurry of similar speculation about Trump dropping out that did not prove true. And, although Hillary Clinton has recently widened her lead in the polls, Trump is still in striking distance (the RealClearPolitics polling average had Clinton up 4.1 percent on October 7). The polls had tightened to a virtual tie since late August, but Clinton has inched back ahead in many polls since the first presidential debate. Still, Trump is not that far out to make a victory unrealistic.

Furthermore, Bill Clinton has his own series of sex allegations, although he’s not the candidate for president. Still, that history complicates matters for Democrats.

Replacing Trump now would be extremely logistically difficult even if he was so inclined (and there is no such indication).

In August, ABC News reported that top Republican officials were exploring what would happen if Trump dropped out because they were exasperated by his comments and controversies then. At that time, ABC said the GOP could not force Trump to withdraw; he would have to do it on his own and, then, the 168 members of the Republican National Committee would choose a replacement. However, ABC had said “for practical reasons, Trump would have to drop out by early September to give the party enough time to choose his replacement and get the next nominee’s name on the ballot in enough states to win.”

USA Today says that “no candidate has ever dropped out before the popular vote takes place” but candidates have died while running for office. One, Horace Greeley, died at the end of November in 1872 before the Electoral College cast its ballot, said USA Today. USA Today also noted, “Each state has its own ballot replacement laws, and after a certain period, a change cannot be made.” 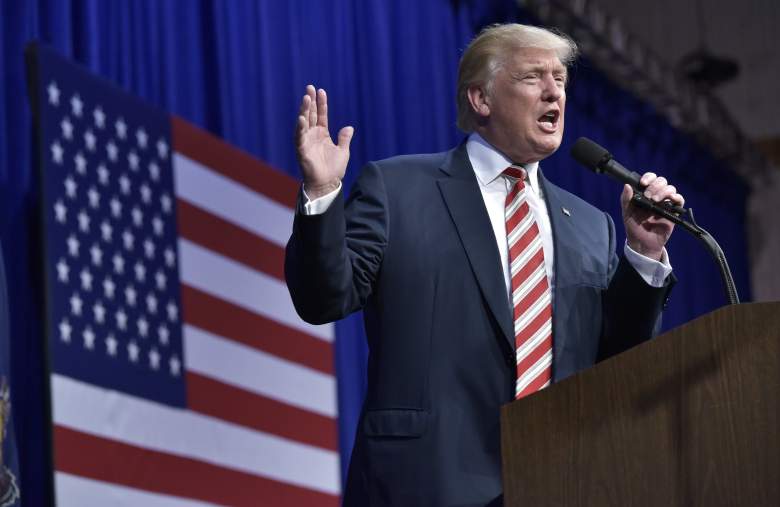 There are also signs that this controversy might have more staying power than others, although time will tell. For one, people noted Trump’s Twitter silence. Although, he has gone stretches without tweeting before, he’s conditioned people to expect a flurry of tweets, especially when he is attacked.

For another, Ryan’s rebuke of Trump and the cancellation of the appearance in Wisconsin, a key swing state, raised eyebrows.

Fox News reported that Ryan had “booted” Trump from the event, and Pence would take his place.

Fox has learned that even though Ryan booted Trump from WIncampagin event Saturday the Speaker & Trump did NOT talk.

Speculation about Trump dropping out spread wildly on Twitter. Here are some of those comments:

But what if, and this is a biiiig if, what if this whole thing leads to Trump actually dropping out? pic.twitter.com/1Gu7ymtlYz

There's talk tonight about Trump dropping out of the presidential race. But if he doesn't, would Mike Pence drop out?

Thought talk of Trump dropping out was foolish, but after reading Kristof column and some of the other stories about his behavior, less sure

Is anyone else nervous about the possibility of Trump dropping out and Pence taking over?

Tick tock to Trump dropping out. My prediction of him not debating Sunday just became more feasible https://t.co/csUh4Uut1C

Awaiting Trump's taped statement & wondering what the chances are that Trump's going to announce that he's dropping out of the race. ?

Loading more stories
wpDiscuz
6
0
Would love your thoughts, please comment.x
()
x
| Reply
Former Utah governor Jon Huntsman has called on Donald Trump to drop out and let Mike Pence replace him. However, such a scenario would be unprecedented, and Trump says he's preparing for Sunday's debate.