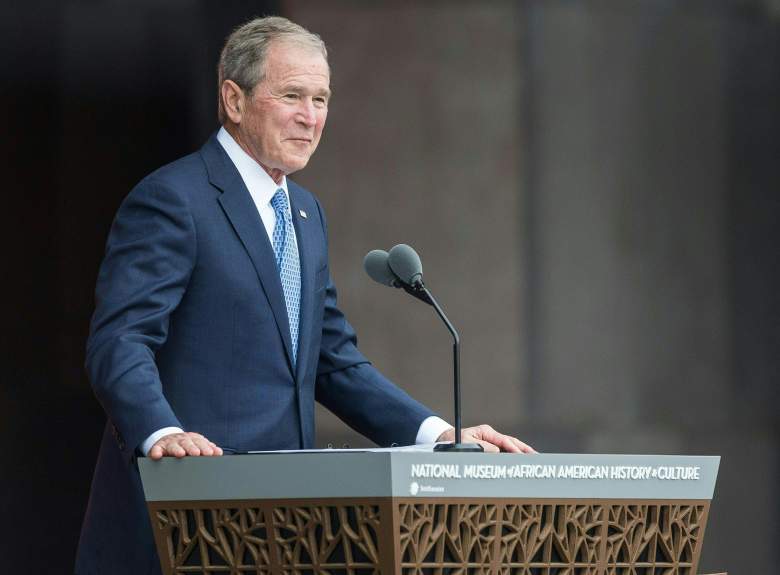 George W. Bush speaks during the opening ceremony for the Smithsonian National Museum of African American History and Culture. (Getty)

With so many Republicans declining to vote for Donald Trump in the 2016 election, many have been curious what the most recent Republican president, George W. Bush, would do on Election Day. Would he be supporting his party’s nominee? Might he cross party lines? And for whom would Laura Bush be voting?

According to CNN, George W. Bush did not vote for Donald Trump, nor did he vote for Hillary Clinton. Instead, both he and his wife, Laura Bush, left the presidential section empty and instead voted for candidates down the ballot.

This comes hours after conservative radio show host Rush Limbaugh said on his show that George W. Bush and Laura Bush both voted for Hillary Clinton, according to The Washington Examiner. A spokesman for the 43rd president immediately released a statement saying that Limbaugh’s report was not true and that he should apologize for misleading his audience.

It’s understandable why there was speculation about the president casting his vote for Hillary Clinton, though. Just last week, George P. Bush, George W. Bush’s nephew, said that the former president would “potentially” be voting for Clinton, Politico reports.

What’s not clear at this time is for whom George H.W. Bush voted today. Back in September, Kathleen Kennedy Townsend, daughter of Robert F. Kennedy, claimed that George H.W. Bush told her he would be voting for Hillary Clinton, according to Politico. When asked about this, a spokesperson for the former president did not confirm or deny what Townsend said.

“The vote President Bush will cast as a private citizen in some 50 days will be just that: a private vote cast in some 50 days,” Bush’s spokesperson said. “He is not commenting on the presidential race in the interim.”

No living former president has endorsed Donald Trump, something that is unheard of in modern American politics. Plus, many GOP officials and former employees of the Bush White House have publicly endorsed Hillary Clinton for president over Donald Trump, breaking with the party they have supported for life. However, Dan Quayle, who served as vice president under George H.W. Bush, has shown his support for Donald Trump.

“I hope those that have said won’t support [Donald Trump] now would reconsider, and before they cast their vote on Election day in November, would end up voting for him,” Quayle said back in May. “If not, don’t show up.”

Loading more stories
wpDiscuz
2
0
Would love your thoughts, please comment.x
()
x
| Reply
President George W. Bush did not support Donald Trump during the Republican presidential primary, but did he vote for him? Or did he vote for Hillary Clinton?