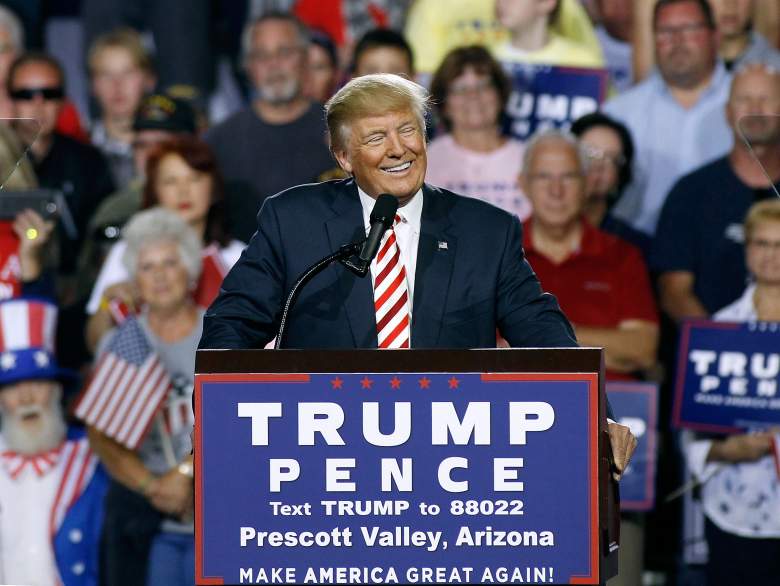 Donald Trump appeals to Arizona voters during a rally in Prescott Valley. (Getty)

President-Elect Donald Trump maintains a low approval rating in the weeks following Election Day, although there has been a slight uptick in recent surveys.

This is in contrast to the historical norm, when a new president-elect’s favorability tends to rise after the election and most Americans rally behind him. According to Gallup, in the days following the 2008 election, for example, 68 percent of Americans had a favorable view of Barack Obama. And even after the contentious 2000 election, which extended for another month due to the Florida recount, 59 percent of Americans approved of George W. Bush after Al Gore conceded the race. No poll has yet shown Trump’s favorable rating cracking 50 percent.

Here’s what recent polls have shown about Americans’ perception of President-Elect Trump and the future of the country following the 2016 election.

The first major poll to be released following the election was from Reuters/Ipsos. It was conducted by speaking to 1,761 Americans online from November 11th through November 15th.

The majority of those polled, 52 percent, said they had an unfavorable view of Donald Trump following the 2016 election. It appears that this has more to do with Trump’s personality than with his policies, though, as Mike Pence was viewed much more favorably. In this poll, 56 percent of those polled said they had a favorable opinion of Pence compared to 44 percent who had an unfavorable view.

Those polled were also asked about the direction of the United States, and virtually everyone in every demographic felt the country is headed in the wrong direction. Sixty-three percent of those polled said America is off on the wrong track, whereas only 21 percent said it’s headed in the right direction (16 percent was unsure). Surprisingly, Republicans were even more pessimistic than Democrats, with 68 percent of Republicans saying America is off on the wrong track compared to 61 percent of Democrats who said the same thing.

When asked what is the biggest issue facing the country, a plurality of those polled – 22 percent – said it’s the economy. After that, the biggest issues were terrorism (13 percent), healthcare (11 percent), and unemployment (10 percent).

Finally, in this poll, 50 percent of those polled said they approve of the job Barack Obama is doing as president, while 44 percent said they do not approve.

The next poll from the Economist and YouGov shows that the majority of Americans don’t want Trump to enact some of his major policies. The poll was conducted by speaking to 1,345 registered voters from November 12th through November 15th.

This specific poll didn’t measure a favorability rating, but one of the most interesting questions was, “Are you optimistic or pessimistic about the next four years with Donald Trump as president?” A plurality of those polled said they’re optimistic, but the number is far lower than it normally is after an election.

This poll also found that most Americans don’t want Trump to follow through on his major campaign promises. The following chart illustrates the percentage of Americans who want Trump to enact a given policy of his.

Not even all of Donald Trump’s own voters are behind some of these proposals. For example, only 65 percent of Trump’s base said he should actually build the wall along the southern border. They were much more united behind renegotiating NAFTA, though, as 83 percent of Trump voters said this should happen.

In the new poll from Quinnipiac, Trump’s unfavorable rating is down significantly, with almost as many Americans having a negative view of him as have a positive view. The poll was conducted from November 17th through November 20th by speaking to 1,071 registered voters.

In general, it seems that voters do not like Trump as a person, but they’re more optimistic about his ability to help the country. The majority of those polled – 52 percent – said he is not honest. As well, 56 percent said he doesn’t have good leadership skills, and 57 percent said he’s not level-headed. However, 74 percent said he is a strong person and 51 percent said he cares about the average American.

Finally, 61 percent of voters say they Trump will act better as president than he did on the campaign trail, but they really want him to stop tweeting; 59 percent said Trump should get rid of his Twitter account.

Finally, a poll from CNN/ORC shows that 50 percent of Americans have an unfavorable view of Trump, although their opinion of him has improved since Election Day, and most approve of the way he has handled the transition process. This poll was conducted by speaking to 1,003 Americans by phone form November 17th through November 20th.

A plurality of voters, 46 percent, said they approve of the way Donald Trump is handling his transition process. For comparison, around this time in 2008, 79 percent of those polled approved of the way Barack Obama was handling his transition. In addition, 48 percent of those polled said that Trump’s actions since the election have made them more confident in his ability to serve as president.

Read More
Breaking News, Donald Trump, Politics
Recent polls have shown that the majority of Americans still have an unfavorable view of Donald Trump and they doubt he can deliver on his promises.