A Florida man who is a Democratic donor and whose family has close ties to Hillary and Bill Clinton is accused of plotting to assassinate President-elect Donald Trump.

Dominic Puopolo was arrested on January 18 at a Subway restaurant in Florida, according to TMZ.

His mother, Sonia, died in a hijacked airplane on September 11, 2001, and Hillary Clinton gave a eulogy at her funeral.

He had allegedly tweeted a video threat, saying that he planned to kill Trump at the inauguration, the site reported.

1. Puopolo Allegedly Said He Was Going to the Inauguration to ‘Kill President Trump’

A police report alleges that Pupolo posted a video on Twitter in which he said, according to The Washington Times, “This is the 16th of January 2017, I will be at the review/inauguration and I will kill President Trump, President elect Trump today.”

You can watch the video here.

On social media, Puopolo, who goes by the name of Jesus Christ on Twitter, has posted a series of other nonsensical and rambling videos.

In one of the rambling videos, Puopolo asks House Speaker Paul Ryan to “fix the park rangers.” He also rambles about Jesus Christ. You can listen above.

Religious ramblings are common on his page. In one post, he wrote, “I just got news from Father of Satan that I am anti Christ not Christ that is why all this hatred and correct rejection of God.”

2. Puopolo’s Family Was Close to the Clinton & His Mother Died on 9/11, News Reports Say

According to the UK Daily Mail, Puopolo “is a member of a prominent northeast family close to Bill and Hillary Clinton.”

According to Daily Mail, Puopolo “sat near Hillary Clinton when she delivered the eulogy at the funeral of Puopolo’s mother, Sonia, who died in one of the jets that flew into the World Trade Center on 9-11.” She sat two seats away from hijacker Mohammad Atta on the plane, and rescuers eventually “recovered Sonia’s left hand with her wedding ring still attached” in the rubble, according to CBS Miami. Sonia’s daughter has written extensively about 9/11 and the finding of the ring was dubbed a miracle.

On Twitter, Puopolo mentions in mother in some of his rants.

According to her obituary, Sonia Mercedes Morales Puopolo, 58, died on September 11 on American Airlines Flight 11. She was described as “an internationally recognized leader in philanthropy and politics as well as a patron of the arts, devoted herself to enriching the lives of others.” Her obituary also reads, “With her husband, Dominic, Mrs. Puopolo contributed significantly to the Democratic Party and was a top backer of the election efforts of former president Bill Clinton and Senator Hillary Rodham Clinton.”

The police report lists Puopolo as being homeless, according to The Washington Times.

He is 51-years-old and was arrested in Miami Beach.

3. Puopolo, a Democratic Donor, Is Being Held Without Bail 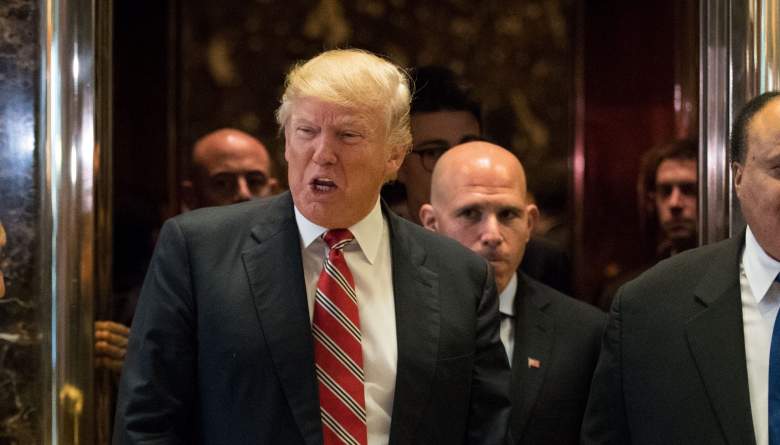 UK Daily Mail reports that Puopolo is a Democratic donor, giving $20,000 to the Democratic National Committee in 1996 as well as contributing to John Kerry and Sen. Ted Kennedy over the years. His sister, Sonia, is a Hillary Clinton donor, the news site reported.

According to LawNewz, Pupolo is being held without bail in Florida “on state charges of threatening harm against a public servant.”

No lawyer was listed for him in court records, the site reported.

4. Security at Trump’s Inauguration Is Expected to be ‘Massive’

According to NPR, protecting the new president-elect and his family is no small order considering the contentious nature of the political debate.

NPR reported that one security tactic being used is the concept of “hard perimeter areas,” in which “nongovernment vehicles will not be permitted” and that “will be fortified by dump trucks, heavy trucks loaded with cement and with buses.”

CNN reported that “more than 100 square blocks — about 2.7 square miles — will be closed to automobile traffic” and 700,000 people are expected to attend the Inauguration. The cost is expected to exceed $100 million, according to CNN.

5. Another Man Set Himself on Fire in Washington D.C. to Protest Trump

Man sets himself on fire outside Trump hotel https://t.co/D29aqu4yGr pic.twitter.com/0rFfLfkDzw

Another man set himself on fire in Washington D.C. outside a Trump hotel in protest of the new president-elect on January 17.

NEW VIDEO #BREAKING:
Man says Trump is a dictator. He tried to light himself on fire at #TrumpInternationalHotel for #TrumpInauguration pic.twitter.com/laJDUPepO6

He allegedly accused Trump of being a “dictator.”

Fire dept puts out fire where man self immolation in front of Trump Hotel DC. He put fire out himself before walking to police. pic.twitter.com/10g5SKXiUJ

“I was trying to set myself on fire as an act of protest,” the man told NBC Washington, according to Buzzfeed.

Read More
5 Fast Facts, Breaking News, Donald Trump, Hillary Clinton
wpDiscuz
0
0
Would love your thoughts, please comment.x
()
x
| Reply
Dominic Puopolo - a DNC donor whose family has ties to Hillary and Bill Clinton and whose mother died on 9/11 - is accused of making an assassination threat on Twitter for the inauguration.