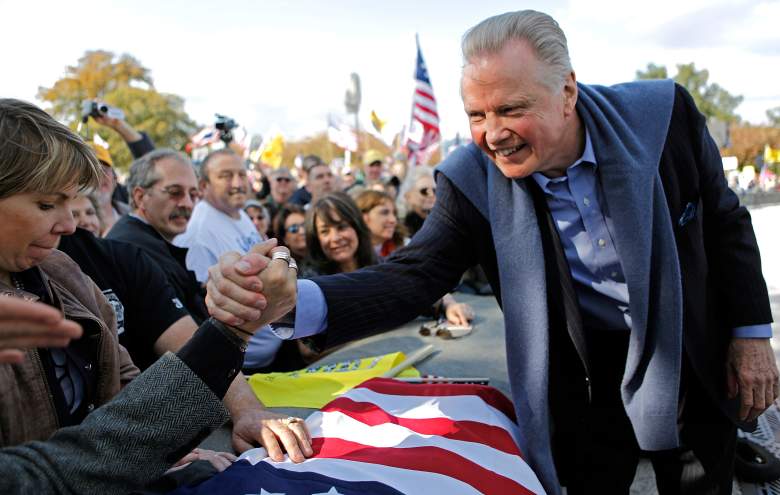 Jon Voight at an Obamacare protest on the West Front of the U.S. Capitol November 5, 2009. (Getty)

Jon Voight is scheduled to appear at the inauguration of Donald Trump this week.

According to the Presidential Inaugural Committee, Jon Voight will speak at the “Make America Great Again! Welcome Celebration” on Thursday, January 19th. President-elect Trump will also be appearing at this event.

Jon Voight is a 78 year old actor known for movies like Midnight Cowboy and TV shows like Ray Donovan. He is also the father of Angelina Jolie.

Is Voight appearing at this event because he is personally a fan of Donald Trump? Or does he, like many of the other artists attending the inauguration, consider this to be a non-partisan event celebrating the peaceful transfer of power?

Here’s what you need to know about Jon Voight and his politics.

1. He Officially Endorsed Donald Trump for President in March 2016 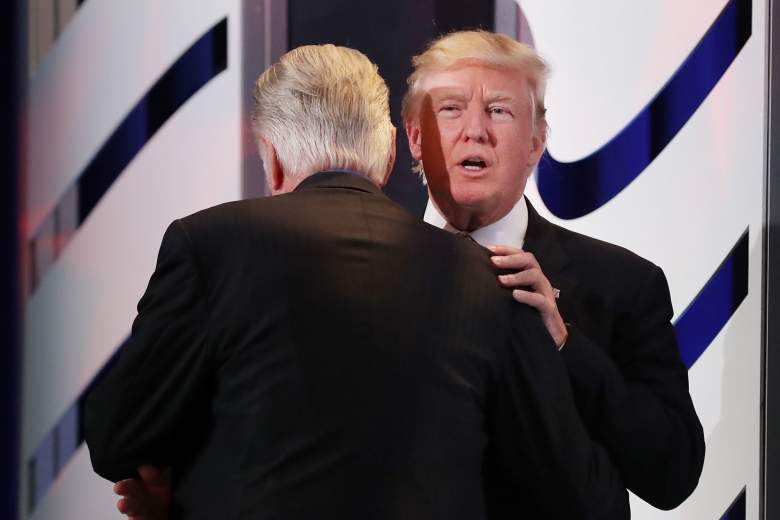 Donald Trump and Jon Voight at the Values Voter Summit at the Omni Shoreham September 9, 2016. (Getty)

Not only does Jon Voight support President-elect Trump right now, but he also supported him going back to March 2016, long before it became clear that Trump was going to be the Republican party’s nominee for president.

Voight endorsed Trump in an interview with Breitbart, a pro-Trump conservative news website.

“He’s an answer to our problems,” Voight said of Trump at the time. “We need to get behind him. The Republicans need to unite behind this man. We need somebody to go in and reconstruct us in a sort of way, get us back to where we were, who we need to be.”

He added, “I pray all Americans who have seen and felt the meltdown of America with the Obama years, to please fight for Donald Trump. He will not let us down. I pray for all good people to see clearly what faces us now. The right vote will save our nation.”

Voight frequently appeared on cable news throughout the 2016 election to support Trump, and he released a YouTube video in October saying that America was on the verge of turning into a tyranny unless Trump was elected. 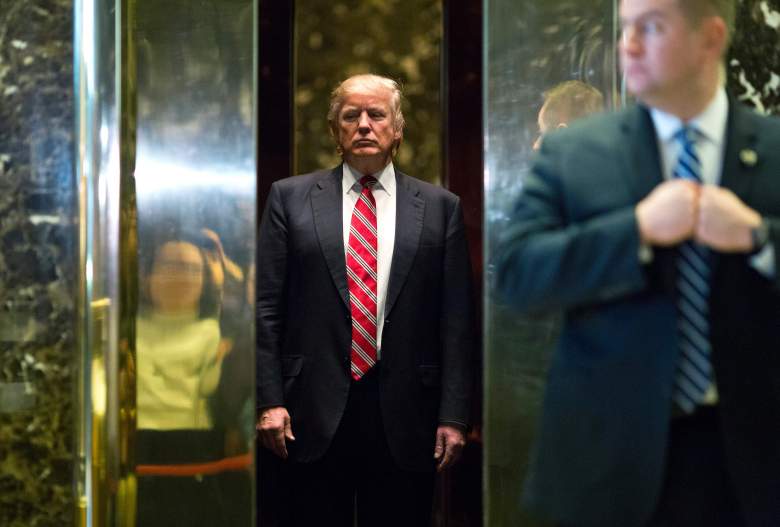 Donald Trump boards the elevator after meetings at Trump Tower on January 16, 2017. (Getty)

Jon Voight’s praise of Donald Trump was initially a bit surprising considering what Donald Trump has said about Voight’s daughter, Angelina Jolie, over the years.

According to The Daily Beast, from 2005 through 2007, Trump took shots at Angelina Jolie’s physical appearance in at least four separate talk show interviews. Usually, Angelina Jolile’s looks were not previously being discussed.

In an interview with Conan O’Brian in 2005, Trump said, “Angelina Jolie is not beautiful.”

In a 2006 interview with Larry King, Trump said Angelina Jolie treats Jon Voight “like a dog.”

“Well, look, number one, I know her father,” Trump said. “Her father is a nice guy. I think she treats him like a dog but maybe they have some kind of a thing…I think he’s a great actor and she just treats him terribly. She’s been with so many guys she makes me look like a baby, OK, with the other side. And, I just don’t even find her attractive. That has nothing to do with why I said it though. But I’m not a fan of hers, as you probably noticed.”

In a 2007 interview with Larry King, Trump once again said that Angelina Jolie is not attractive.

3. He Said That Barack Obama Was Taking Away Americans’ Freedoms & Causing Civil Unrest 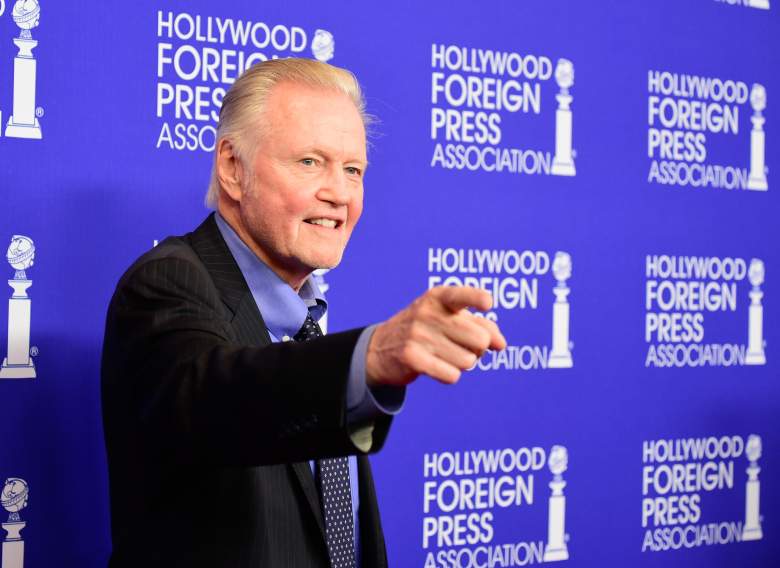 John Voight fought against Barack Obama throughout his presidency. In a Fox News interview that took place nine months into President Obama’s first term, Voight said that Obama was causing civil unrest in the country and that he was arrogant.

“We’re witnessing a slow and steady takeover of our true freedoms. We’re becoming a socialist nation, and Obama is causing civil unrest in this country,” he said, according to The Huffington Post.

Voight added that Obama’s fight for health care reform was a “personal crusade” and that it was all about him. Later, Voight showed support for the Tea Party movement and appeared at anti-Obamacare protests in Washington, D.C.

“We’re in a situation right now where we’re losing freedoms week by week over this last year,” Voight said in 2010. “It’s becoming a huge government bureaucracy.”

In a column in The Washington Times published in 2008, Voight said that Obama grew up “with the teaching of very angry, militant white and black people.”

4. He Endorsed Rudy Giuliani for President in 2008 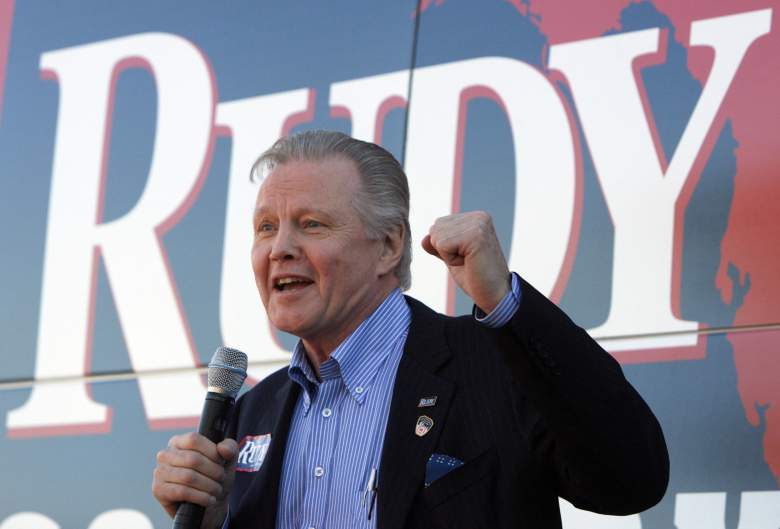 Jon Voight at a Rudy Giuliani rally in January 2008. (Getty)

In addition to endorsing Giuliani, Voight also appeared at many of the candidate’s rallies, revving up the crowd and speaking to voters.

The New York Times reported at the time, “[Voight] shook hands. He signed autographs. He warmed up the not-very-large crowds. He talked — and talked and talked, some said — and when people on the campaign dialed home, they handed their cellphones to him, and asked him to say a quick hello to a star-struck spouse, son or daughter. He brought some high-wattage celebrity to a campaign that was in distress.”

Being from New York himself, Jon Voight praised Rudy Giuliani for his work as mayor of New York City.

“A miracle happened,” Voight said at a Giuliani rally. “God sent an angel, and his name was Rudy Giuliani.”

After Giuliani dropped out of the race, Voight endorsed John McCain for president. Rudy Giuliani, like Jon Voight, would later become an enthusiastic Donald Trump supporter.

5. He Was a Democrat When He Was Younger 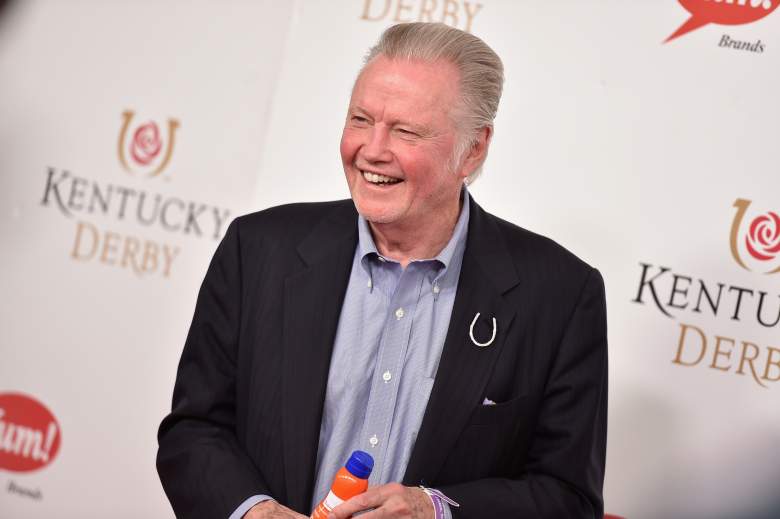 on Voight attends the 142nd Kentucky Derby at Churchill Downs on May 07, 2016 in Louisville, Kentucky. (Getty)

Voight says that he was a Democrat when he was younger, telling Box Office Mojo that he was a strong supporter of John F. Kennedy and believed in him deeply. He says he was also very much against the Vietnam War and attended anti-war protests.

Later, Voight said in a Washington Times op-ed that he feels he was brainwashed by the Democratic party back then.

“The Democrats have targeted young people, knowing how easy it is to bring forth whatever is needed to program their minds,” he wrote. “I know this process well. I was caught up in the hysteria during the Vietnam era, which was brought about through Marxist propaganda underlying the so-called peace movement. The radicals of that era were successful in giving the communists power to bring forth the killing fields and slaughter 2.5 million people in Cambodia and South Vietnam. Did they stop the war, or did they bring the war to those innocent people? In the end, they turned their backs on all the horror and suffering they helped create and walked away.”

Read More
Donald Trump, Jon Voight, Politics
wpDiscuz
1
0
Would love your thoughts, please comment.x
()
x
| Reply
Jon Voight is scheduled to appear at the inauguration of Donald Trump this week. What are his political views? Did he endorse Donald Trump?