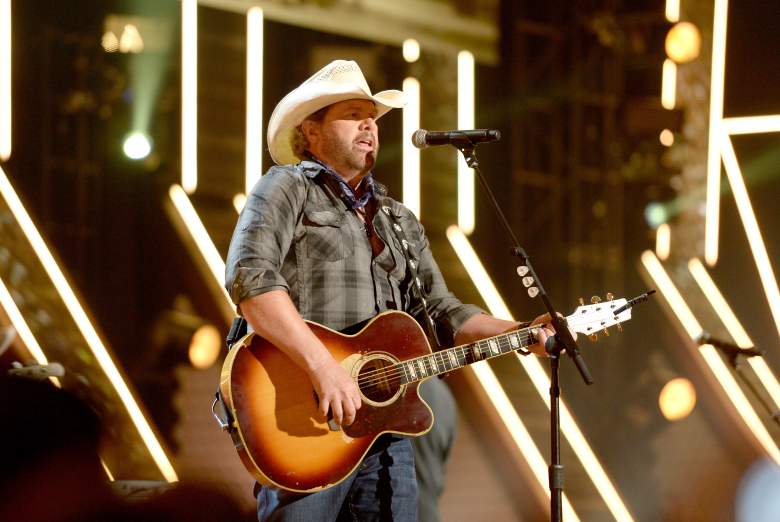 Toby Keith performs onstage during the 2016 American Country Countdown Awards on May 1, 2016. (Getty)

Country music artist Toby Keith will be performing at the inauguration of Donald Trump this week. Does this mean he is a Republican and that he supported Trump throughout the 2016 election? What are his political views?

Contrary to what you might think, Keith himself is actually a registered Independent, and he used to be a Democrat. Keith says that he changed his party affiliation during the 2008 election.

“It’s strictly [because] my party, that I’ve been affiliated with all these years, doesn’t stand for anything that I stand for anymore,” Keith said of the Democratic party in a 2008 interview with CMT. “They’ve lost any sensibility that they had, and they’ve allowed all the kooks in, so I’m going independent.”

The country music artist told The Chicago Tribune in 2016, “I was a Democrat my whole life. They kind of disowned me when I started supporting the troops, then I went and registered Independent.”

Keith is referring to the fact that he wrote a number of extremely patriotic songs in the aftermath of September 11th and has performed for the military numerous times. This criticism did not just come from your average Democrat; it also came from some within the country music community. In 2003, Keith had a very public feud with The Dixie Chicks after Natalie Maines said she felt Keith’s music was “ignorant, and [made] country music sound ignorant.”

In 2004, Keith told The Boston Globe that he is similar to Senator Joe Lieberman in that he is “a conservative Democrat who is sometimes embarrassed for his party.” He later endorsed George W. Bush during the 2004 presidential election and even performed at a Bush rally.

In the 2008 election, Keith did not officially endorse any candidate, but he did say that he was probably going to vote for John McCain because he was a fan of McCain’s running mate, Sarah Palin.

“Palin’s about the least political-looking, acting, resembling person that’s ever run for office,” Keith told CMT. “You look at her: All the housewives are gonna love her. All the women in America can relate to everything she’s done. She’s real normal.”

Keith also said that Barack Obama was the party’s best candidate since Bill Clinton. But he was criticized that year for suggesting that Obama is only an acceptable candidate because he acts white.

“I think black people would say he doesn’t talk, act or carry himself as a black person,” Keith said. “…Even though black society would pull for him, I still think that they think in the back of their mind that the only reason he is in is because he talks, acts and carries himself as a Caucasian.”

So what about the 2016 election? Keith was mostly silent during this cycle, although he suggested in an August 2016 interview with the Chicago Tribune that both Hillary Clinton and Donald Trump are equally bad.

“This election, I don’t think it makes a difference,” he said. “I can’t believe there’s 300 million Americans in this country, and we’ve got these two as our final two. It’s absolutely crazy.”

However, he said in an October 2015 interview with People that he likes the fact that some of the candidates this year are not politicians and that he wants someone with business experience to be president.

“With a business person who knows the difference between right and wrong, instead of right and left, we’d have a chance to go forward,” Keith said. “With all the division in the world now – we’re polarized right wing, left wing, cops and blacks – it looks to me like we’re headed for turmoil in every way. The world looks like it’s on fire. You’ve got to get the politicians and the agendas out of the way and get somebody in there that might take it over and save old Uncle Sam.”

That sure sounds like an endorsement of Trump, although his comment would technically also apply to Carly Fiorina, the former CEO of Hewlett-Packard and one of Trump’s Republican primary opponents; she too touted her business experience and had never held elected office before running for president.

Still, Keith in the past has voiced some political opinions that contrast with Trump’s rhetoric. In 2011, Keith told CNN that although he wants the United States to secure the border, it’s not because undocumented immigrants who cross it fare bad people.

“I’ve been around Mexicans my whole life, and they are wonderful people,” Keith said. “They’re very family-oriented, very religious — a lot of them — they have great family values. They’re hard, hard-working people. Somehow we have to secure the border, but it’s not because of the great people who are crossing the border. It’s to protect that border from being infiltrated by radical, extreme terrorists. That’s the only thing I think they need to stop.”

Trump, on the other hand, famously said in his campaign announcement in 2015, “When Mexico sends its people, they’re not sending their best…They’re sending people that have lots of problems, and they’re bringing those problems with us. They’re bringing drugs. They’re bringing crime. They’re rapists. And some, I assume, are good people.”

On the topic of health care, Keith told CNN in 2011 that he supports national health care, but in the same breath saying that not every American deserves health care.

“I think you have to earn your way, too,” Keith said. “I think if you’re a working mother — any race, religion, creed, whatever — and you’re trying, you deserve it. But if you’re sitting around drinking beer, talking on your cell phone, smoking cigarettes, sitting on the porch and not trying, I don’t know if you deserve it.”

Trump told The Washington Post this week that his Obamacare replacement will provide “insurance for everybody,” which suggests he is going to actually expand the reach of Obamacare rather than scale it back. However, he has not yet provided any details.

Finally, although Trump believes that the presidency of Barack Obama was an unmitigated disaster, Keith said in 2011 that he thought Obama was doing just fine.

“‘[I]t doesn’t matter if it’s a Democrat, independent, Republican or just a citizen who’s running for president,” he said. “If they’re doing a good job, let ’em do a good job. So far, so good.”

“It was just a paid party for the sponsors, just a private party for 1,200 people,” Keith said. “When I start catching s— about it, I just say, ‘Look, I’m not a registered Republican, and they paid me a buttload of money to play this thing. And if the other side calls, I’ll go play theirs for that much, too.'”

“I don’t apologize for performing for our country or military,” Keith said in a statement to Entertainment Weekly. “I performed at events for previous presidents [George W.] Bush and [Barack] Obama and over 200 shows in Iraq and Afghanistan for the USO.”

This comes after Broadway singer Jennifer Holliday canceled plans to sing at the inauguration less than 24 hours after her appearance was announced.

“I was honestly just thinking that I wanted my voice to be a healing and unifying force for hope through music to help our deeply polarized county,” Holliday told The Wrap. “Regretfully, I did not take into consideration that my performing for the concert would actually instead be taken as a political act against my own personal beliefs and be mistaken for support of Donald Trump and Mike Pence.”

Read More
Donald Trump, Politics, Toby Keith
Country music artist Toby Keith will perform at the inauguration this week. Does he support Donald Trump? What are his political views?