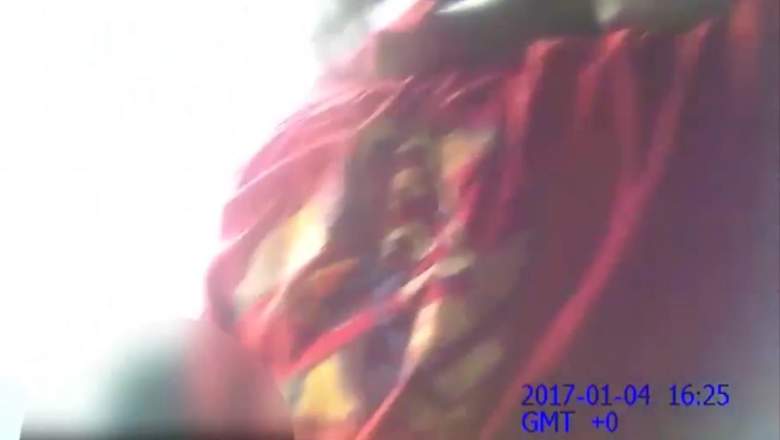 The back of Muhammad Abdul Muhaymin seen in a screenshot from the police body camera footage. (YouTube)

WARNING: The police body camera footage below includes images that some may find disturbing and contains graphic language.

On January 26, Phoenix police released violent body camera footage from the arrest of Muhammad Abdul Muhaymin, a 43-year-old man who later died after his arrest. In the footage, Muhaymin can be heard yelling, “I can’t breathe” as police officers wrestle him to the ground. Muhaymin’s arrest involved 10 officers.

Muhaymin was arrested at the Maryvale Community Center on January 4. As the transient man was being escorted out of the facility, he struggled with multiple police officers. He is seen being combative with 10 police officers, who needed to use two handcuffs to arrest him. The officers struggle to get him to calm down, even as they are on top of him. At the start of the video, police try to get Muhaymin to let go of a dog.

At one point, Muhaymin says, “I can’t breathe,” similar to Eric Garner in New York in July 2014. In that case, the police officers responsible for Garner’s death were not indicted.

Muhaymin was taken to a local hospital, but later died. KTAR reports that a cause of death was not released, but he might have been under the influence of drugs.

Police told ABC15 that Muhaymin showed signs of “medical distress” when he was being transferred and was rushed to the hospital. He started throwing up while still wearing handcuffs, which were later removed, police said. CPR was performed, police said.

“We have a duty to protect the integrity of the investigation, however, in this particular case, we do not believe the release of the body worn camera video will jeopardize our ability to complete a thorough and accurate investigation,” Williams said. “As with any critical incident, we will always review and learn from what has transpired.”

Man who died in Phoenix PD custody identifiedOfficials identified him as 43-year-old Muhammad Abdul Muhaymin. ◂ ABC15 is your destination for Arizona breaking news, weather, traffic, streaming video and in-depth coverage to keep you informed throughout the day. Our mission is simple. ABC15 is Taking Action to make Arizona an even better place to live. For more download the ABC15 mobile app:…2017-01-05T23:34:59.000Z

Muyamin’s sister, Mussallina Muhaymin, who is also his legal guardian, told the media outside Phoenix police headquarters on January 26 that her brother was a “good person,” adding, “This should never have happened,” reports AZCentral.

KPNX reports that the Phoenix Black Lives Matter group claimed that Muhaymin was with a service dog. He was told that he could not use a restroom inside the community center.

“We are seeking justice, and we are seeking answers,” attorney David Chami told the media. Chemi added that Muhaymin used drugs and has struggled with mental illness in the past. He did not say if the family plans to file a lawsuit yet.

Police released the names of all 10 police officers involved in the arrest. All 10 have at least 12 years of experience on the force. AZCentral reports that one of them, Kevin McGowan, has been accused of excessive force prior to this arrest. They were all on administrative leave, but are back on duty. They are:

Here is the complete statement Williams released after the body camera footage was made public:

In keeping with the spirit of transparency and positive communication with our community and our employees, we are releasing the body worn camera footage obtained during our contact with Mr. Muhammad Muhaymin from January 4th.
This investigation remains active. We have a duty to protect the integrity of the investigation, however, in this particular case, we do not believe the release of the body worn camera video will jeopardize our ability to complete a thorough and accurate investigation.
As with any critical incident, we will always review and learn from what has transpired. 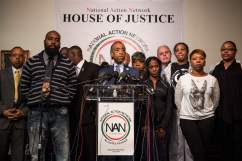 Read More
Arizona, Phoenix
Phoenix police released violent body camera footage showing the arrest of Muhammad Abdul Muhaymin, who can be heard saying, "I can't breathe" while being wrestled to the ground.