President Donald Trump’s doctor has revealed that the president takes a hair growth drug called “Finasteride,” which is used to treat male pattern baldness, according to The New York Times.

The drug is marketed as “Propecia.”

The revelation sparked new interest in the drug, which can cause side effects ranging from impotence to memory loss.

“Trump takes a small dose of the drug, finasteride,” reported the Times, which added that “Trump uses a prostate-related drug to maintain growth of his scalp hair.” The Times reported that the White House would not comment on Bornstein’s revelation or say whether he is still Trump’s doctor.

Trump’s mane of yellow hair has been the butt of jokes for years, although it’s never been revealed before that Trump allegedly takes a drug to grow it.

1. Trump’s Long-Time Doctor Revealed That Trump Takes More Than One Medication but Says the President Is Very healthy

The New York Times reported that Bornstein claims Trump, 70, takes more than one medication. In addition to the hair growth drug, the doc said in interviews that the president “takes antibiotics to help with the skin problem rosacea, and a “statin for elevated blood cholesterol and lipids,” the Times reported.

The Bornstein practice is located at Lenox Hill Hospital in New York. Trump’s long-maned doctor told the Times that he takes the hair growth drug too. Learn more about Trump’s doctor here:

2. Finasteride Has a Series of Potential Side Effects, Ranging from Lack of Interest in Sex to ‘Mental Fogginess’

As with many medications, Finasteride can potentially have side effects in some people, although, if Bornstein is right that Trump takes the drug, it’s not known whether Trump himself suffers from any.

Drugs.com reports that the drug can cause “decreased sexual desire or ability.”

The site warns users to contact a doctor if they suffer from any of these severe side effects:

ABC News reported that George Washington University researchers conducting a study into the drug interviewed men who “reported side effects such as erectile dysfunction, decreased sexual drive, problems with orgasms, shrinking and painful genitals, even some neurological problems, such as depression, anxiety and mental fogginess.”

3. Trump’s Hair Has Been the Butt of Jokes For Years, Which He’s Complained About

Another hair joke. Donald Trump’s hair has been the butt of jokes for years. When he ran for president, the jokes increased all the more. (Twitter)

Trump has complained in the past about all of the attention – and mockery – given to his hair, saying it’s a double standard. He’s also repeatedly insisted that his hair is real. He joked that he didn’t care if it rained at the inauguration, reported US Magazine, because “if it really pours, that’s OK because people will realize it’s my real hair.”

His mane of hair is certainly unique. It’s also the topic of endless speculation. US Magazine reported that, since becoming president, some people believe Trump has changed his hair color from a gold-yellow to a subtler yellow-blond hue.

Trump’s former hairdresser once told The Mirror that Trump uses lacquer on his hair and has long hair that he combs straight back. His hair is not a toupee, the hairdresser said, according to The Mirror.

4. Propecia Works By Blocking a Form of Testosterone That Leads to Hair Loss

During the rally, a woman shouted that she loved Trump’s hair. He said it was the nicest compliment and added: “It IS my hair.” (Getty)

According to ABC News, “Finasteride works by blocking the conversion of testosterone into a more potent form, called DHT, which contributes to hair loss. It was originally developed in 1992 by drug giant Merck as a treatment for enlarged prostates and sold as the drug Proscar.”

The FDA approved the drug in 1997, reported ABC.

5. Trump Has Been Hesitant to Release Full Medical Records 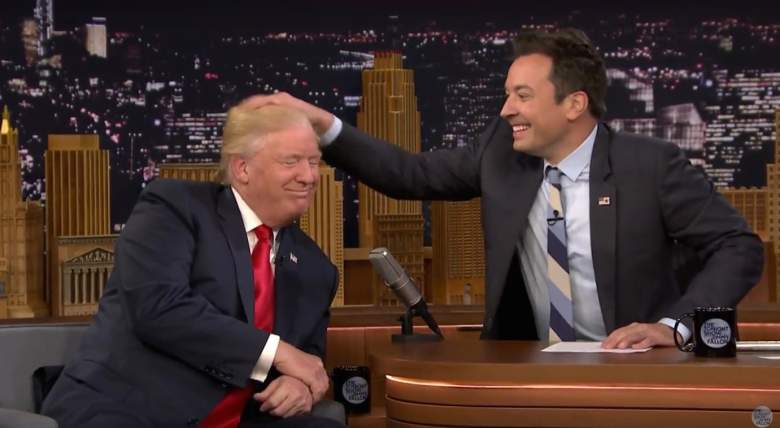 During the presidential campaign, Bornstein, Donald Trump’s personal physician, released a letter on the health of the then candidate. The one-page letter, released in September, proclaimed Trump’s health was in top shape, but the president has been criticized for not releasing more information.

He’s the oldest person ever to assume the presidency.

“Over the past 39 years, I am pleased to report that Mr. Trump has had no significant medical problems,” Bornstein wrote in the letter. “Mr. Trump has had a recent complete medical examination that showed only positive results.”