Car Drives into Gulf Shores ParadeMultiple people are injured after a car crashed into a marching band at the Gulf Shores parade.2017-02-28T16:47:02.000Z

Multiple members of the Gulf Shores High School marching band were struck by an SUV driven by an elderly man during a Mardi Gras parade in Alabama.

As many as 12 band members were taken to the hospital, and WKRG-TV reported that four students were in critical condition after the elderly driver is accused of running into the band from behind. Police are labeling it an accident, although they are still interviewing the driver, who has not been identified.

The tragedy comes just days after an accused drunk driver plowed into a crowd of parade watchers at the Endymion parade, which is also part of Mardi Gras festivities. Initial reports also said multiple people were in critical condition right after that crash too, but it was later reported that none of the Endymion victims had life-threatening injuries.

1. There Were Reports of Students Stuck Under the Vehicle

Fox10 News reporter Candace Murphy tweeted that an eyewitness reported seeing victims trapped under the vehicle that ran into the band. The students were struck from behind as they started marching, according to WKRN-TV.

Witness says she saw teens in GSHS band stuck under a vehicle that hit the students during the Mardi Gras parade. 9 taken to hospital.

According to WKRG-TV, the driver of the vehicle is 73-years-old, and the victims range in age from 12 to 17. The driver is being interviewed by police, but it’s not yet clear whether any charges will result, the television station reported.

“Every indication is that it was just a tragic accident by an elderly man driving his vehicle into these band members,” police said in a news conference, adding that they were in the process of reconstructing the accident.

2. There Were Multiple Injuries & Reports That Some Were in Critical Condition

Just as the parade started to turn the corner, a late model SUV driven by an Alabama man who has not been identified “accelerated and struck” the band members, police said in the news conference. The patients were transported to local hospitals.

Praying for Gulf Shores. 11 injured, 3 in critical condition after a car has driven through some of GSHS band in the Mardi Gras parade.

Scanner traffic painted a dramatic scene. “Subjects trapped under a vehicle,” the dispatcher says at one point in the audio transmissions.

Band members were “carted” away from the scene.

Photos and video showed items scattered throughout the roadway as people helped the injured.

Homeland Security was monitoring the situation, Fox News reported, adding that eyewitnesses said the car “mowed” the band members down. WKRG-TV reported that the tragedy occurred at the parade’s beginning. However, it appears to be an accident.

3. The Driver’s Foot May Have Slipped Onto the Gas Pedal

Early reports indicate the crash was not intentional, although it was still unfolding. You can watch the police press conference here. The parade has occurred for almost four decades in Gulf Shores.

There was no evidence of drugs or alcohol being involved, authorities said. The driver is voluntarily undergoing testing, reported Fox 26.

Fox 4 Beaumont reported that “Eyewitness accounts say a driver slipped off the brake onto the gas, plowing into the back of the Gulf Shores High School marching band.”

4. The Vehicle Driven by the Elderly Man May Have Been Part of the Parade

According to Fox News, the vehicle that crashed into the marching band was part of the parade, which was cancelled after the accident. However, when asked whether the driver was actually in the parade itself, police demurred from answering the question in the news conference.

According to Fox News, the SUV that crashed into the van had the initials MOAA on its side, which stand for the Military Officers Association of America.

Local 15 reported that the man’s vehicle was stationed in the parade directly behind the band.

5. The Tragedy Comes After Dozens Were Injured During a New Orleans Mardi Gras Parade

The scene after a truck crashed into the crowd at the Endymion Parade in New Orleans. (Twitter/Mayor Landrieu)

In New Orleans, an accused drunk driver is accused of ramming into a crowd, injuring dozens of people who were watching the Endymion parade. Neilson Rizzuto is accused of having a blood-alcohol content three times the legal limit in Louisiana. You can learn more about that incident here: 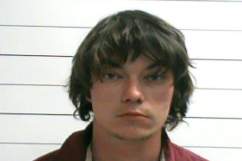