Photos of the man believed to be the suspect in a terrorist attack near the UK Parliament were reported in British media shortly after the incident.

In some of the photos, you can see knives on the ground. Reports of a suspect name were circulating on Twitter but were not confirmed. This post will be updated when the attacker’s identity is verified.

Actually upon having a closer look at the picture of the suspect of #London terror attack, I can see 3 knives on the ground. Look! @akhbar pic.twitter.com/dJwOv1XwUN

The Metropolitan police reported that they were considering the assault on the British seat of government to be a terror attack. Authorities said in a press conference that 40 people were wounded in the attack and five people have died, including a police officer, a female pedestrian, and the attacker. According to BBC, two of those killed were rammed into by the suspect’s car on Westminster Bridge.

According to UK Mirror, the suspect “entered the grounds of the Houses of Parliament and stabbed a policeman just after 2.30 p.m.” on March 22. “He reportedly ran through the security check at the gates and stabbed at a police officer.”

Some people used the suspect photos to make political commentary.

The attacker was shot “up to three times,” and has died, reported the Mirror. BBC reported that three French schoolchildren were injured on the bridge.

Graphic videos and photos emerged from the scene showing victims lying in the roadway and being moved into ambulances; Parliament was suspended, and Prime Minister Theresa May was reportedly whisked away from the scene in a car.

A victim at the scene. (Getty)

According to the Guardian, the “attacker ploughed into pedestrians on Westminster Bridge before crashing into the railing of the Houses of Parliament and exiting the car to continue the attack.” The Guardian reported that “police are currently working on the assumption that there was only one attacker” despite early reports that there might be two.

Those injured included police officers who were “returning from a commendation ceremony,” according to the Guardian. 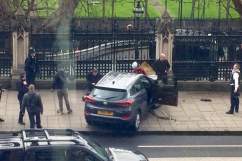 Read More
Breaking News, Terrorism, UK, United Kingdom
Follow Heavy ↓
wpDiscuz
2
0
Would love your thoughts, please comment.x
()
x
| Reply
Photos of the man believed to be the suspect in a terror attack near the UK Parliament in London surfaced online. He's shown being stretchered away.