Today Rick Ross released his tenth album “Rather You Than Me” and while the album is getting a lot of buzz, there’s a track that sticks out. Beef in hip-hop is not a rarity however over the last couple years the conflict between artists has been subdued or caused by subliminal messaging/social media. In “Idols Become Rivals” Rick Ross makes it clear that he’s going after Cash Money co-founder Birdman.

After an intro by Chris Rock, Rick Ross starts his first verse praising Birdman for being an inspiration to him growing up. However from that point on it’s all shots. Ross brings up other artists Birdman has taken advantage of over the years mentioning Mannie Fresh, DJ Khaled, Trick Daddy and more.

Still Ross gets more vivid comparing Birdman to a Catholic Priest: “Catholic record labels, niggas gettin’ raped, boy, Birdman’s a priest, moans in his synagogue”. Furthermore Rick Ross continues to call out Birdman in the third verse. “You stole them boys pub and bought a foreclosure, Scott Storch demons in it, which is more poison”. This is alluding to Birdman’s purchasing of Scott Storch’s mansion in 2012. Rick Ross believes Birdman bought the mansion to help Storch who had filed bankruptcy due to his cocaine addiction. 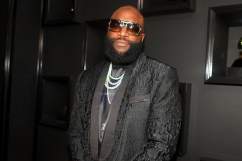 Stream Rick Ross’ New Album ‘Rather You Than Me’

Ross goes on to say that he’s helped Birdman numerous times. Lastly Rick Ross closes the track saying he has love for Birdman, but continuing to blame him for his crooked ways. Cash Money emcee Lil Wayne has already offered his piece on the track, as he took to Twitter to show Ross gratitude.

dam big bro that msg hit me in the heart and put the motivation on automatik start. I needed that. 1 boss 2 another pic.twitter.com/3AIaHMuAmn