#FDNY mourns the loss of FDNY EMT Yadira Arroyo, Station 26, who was killed in the line of duty tonight while serving our city. pic.twitter.com/b3KrzGabYE

A 44-year-old mother of five and EMT was killed after police say a career criminal ran her over with her own ambulance.

The horrific situation unfolded in the Bronx and took the life of Yadira “Yari” Arroyo. Shocking video from the scene showed Arroyo’s crumpled body lying in the street as passersby stopped to gape. (Be aware that the video at the previous link is very graphic and disturbing).

Jose Gonzalez is now accused of being the joyrider who killed Arroyo. He’s described as a career criminal with a lengthy arrest record.

1. The Suspect Is Accused of Carjacking the Ambulance After Riding on Its Bumper

Mayor deBlasio says EMT run over by own ambulance was a mother of 5. Suspect riding on back, got behind wheel when she stopped. @wcbs880 pic.twitter.com/W1O94GUP8F

According to NBC New York, the two emergency medical technicians for the New York Fire Department were told the man was riding “on the back bumper of their ambulance in the Bronx at around 7 p.m.” as they headed to a call.

The EMTs got out and approached the man, who jumped into the ambulance and ran over Arroyo, the driver of the ambulance, reported NBC.

The EMTs were heading to an accident in the Bronx when they noticed a person on back of ambulance. He then got in and drove over the EMT

The New York post is calling Gonzalez a “joyrider.” According to ABC 7, police said Arroyo “got out of the ambulance along with her partner. Then, the suspect apparently got into the driver’s seat and started to drive away. The two EMTs tried to stop him…The suspect put the ambulance in reverse, knocking Arroyo to the ground, then drove over her.”

You can read more about the suspect here: 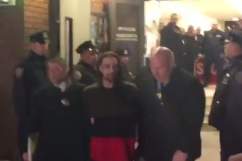 2. Horrific Videos Showed the Ambulance Dragging Arroyo & Her Body Lying in the Street

NYDailyNews: UPDATE: EMT killed by stolen ambulance in Bronx has been identified as Yari Arroyo … pic.twitter.com/klYvefbvj1

Videos shared by citizens to social media were horrifying. One, posted to Twitter and then YouTube, shows her crumpled body in the street as citizens make phone calls and try to figure out what’s happened. Arroyo’s partner’s screams pierce the videos.

A second shows “the ambulance speeding across an intersection with one of its doors open, its lights flashing and the body of one of the EMTs being dragged beneath the vehicle,” according to NBC.

Arroyo was a mother of four children. According to the New York Post, they range in age from 24 to 7. The oldest son told the newspaper that all of the older children were able to say goodbye to their mother.

NYPD: EMT killed, another critically injured in the Bronx after man steals ambulance, runs them over – @JohnAnnese pic.twitter.com/gcY7PDI62U

According to The New York Post, Gonzalez was met by a group of EMTs who hurled insults at him during a perp walk on March 17.

DEVELOPING: 25yo Jose Gonzalez is walked out of 43rd. He's charged w/ murder of an EMT after he allegedly stole her ambulance in the #Bronx pic.twitter.com/J97W9en3tB

Gonzalez “appeared battered and bruised as he was led away by detectives while dozens of EMTs hurled insults at the sneering, long-haired man before dawn at the 43rd Precinct,” the Post reported.

The New York Daily News reported that 35 uniformed EMTS were waiting, and one yelled, “You’re a piece of s–t.”

Arroyo had worked as a New York paramedic for 14 years.

Arroyo’s brother wrote on social media, “She was my only sister… I may not have been raised with her, but I loved her like If we did… why God.. she was a good person.. RIP Yari Arroyo I will always love you…”

A cousin wrote on Facebook, “A member of our family has just been killed; Yari Arroyo was an EMT working in NYC and was run over by the man she was trying to help, when he stole the ambulance and run over both EMTs Killing my Cousin!”

4. Arroyo’s Public Facebook Page Contains a Positive Message at the Top & the Suspect Has 31 Arrests on His Rap Sheet

What can be viewed on Arroyo’s public Facebook page reveals a positive personality. Her top post, changing her cover photo last August, bore the message, “always be positive” with a smiley face.

The page says she lives in the Bronx and was from New York. She also posted about home decorating and cleaning.

According to the New York Post, the suspect claimed he was innocent as authorities walked him out of a precinct.

“Gonzalez has an extensive rap sheet with arrests dating back to 2008, including for assault, criminal mischief, marijuana sale and possession, turnstile jumping and public lewdness,’ the Post reported. The New York Daily News reports that Gonzalez has 31 arrests on his rap sheet.

5. Arroyo Was Engaged to an EMT & Two of Her Children Wanted to be EMTs

RIP to the FDNY EMT killed in the line of duty Yari Arroyo. Thoughts and prayers to the family as well as the other EMT Williams. pic.twitter.com/2afuS8PlNC

According to The New York Post, Arroyo’s sister-in-law said of the children’s goodbye to Arroyo: “It was devastating. It was their mother. They were very upset but the eldest held it together for the others and he gave them a beautiful speech saying he was going to take care of his brothers and be a rock for them,” she said.

The Post reported that one of Arroyo’s sons is studying to be an EMT, another son plans to do so, and her fiancee is an EMT she met at work. The sister-in-law told the post that Arroyo was helping put her son through school and “loved to work.”

Arroyo’s fiancé is an FDNY paramedic whom she met on the job.

According to The New York Post, an officer saw the tragedy occur and “apprehended the driver.”

Once the suspect stole the ambulance and ran over the EMT, he crashed knto another vehicle and was apprehended by police. @CBSNewYork

The suspect “crushed” the medic by putting the ambulance into reverse and driving into her, reported the newspaper. The other EMT involved, Monique Williams, survived the attack.

Read More
5 Fast Facts, Breaking News, Crime, New York City
wpDiscuz
6
0
Would love your thoughts, please comment.x
()
x
| Reply
Yadira "Yari" Arroyo is the EMT from the Bronx who was run over by a suspect who carjacked the ambulance she was driving in New York. Horrific videos captured the scene.