A gunman with an affinity for the Dallas police shooter moved randomly from person-to-person, murdering three people in downtown Fresno, California, and he shouted Allahu Akbar as he was arrested, police said in a news conference.

The accused shooter – who had posted about Black Lives Matter and allegedly told police he “hates white people” – was named as Kori Muhammad (Kori Ali Muhammad), already a wanted suspect in the earlier slaying of a Motel 6 security guard. The guard makes the total of deceased victims four.

However, police said that the murders were a hate crime motivated by race (the April 18 victims were white, and Muhammad is black), not terrorism.

Muhammad, 39, posted the phrase “Allahu Akbar” on Twitter too, writing all in caps that he thanked “ALLAH FOR THE CATACLYSMIC NATURAL DISASTERS STRIKING America.” It’s not clear which natural disasters he meant, but his rambling social media posts show a fixation with the weather.

Altogether, the gunman wounded four people in the downtown shootings, killing three of them; all of those victims were white men, reported the Fresno Bee, which added that police said Muhammad had also expressed “dislike of whites” on Facebook. One of those slain was a utility worker sitting in his truck.

ABC 30 identified one of the victims as Mark Gassett, a 37-year-old father, who “had just left the Catholic Charities with a grocery bag full of food when he was shot.” The Fresno Bee identified the second as Zackary Randalls, a new PG&E employee and married father of two. And ABC news reported that David Jackson, a military veteran, was the third victim.

Last July, he posted about the Baton Rouge police shootings, writing, “They shot Our Brother from a 100 yards through a structure. Guess you didn’t have a robot. #ENJOYPARADISEGOD.” He also posted a photo of a man smiling with the caption, “My face when grafted white devils die.” (The post also includes a racial slur to some blacks.) 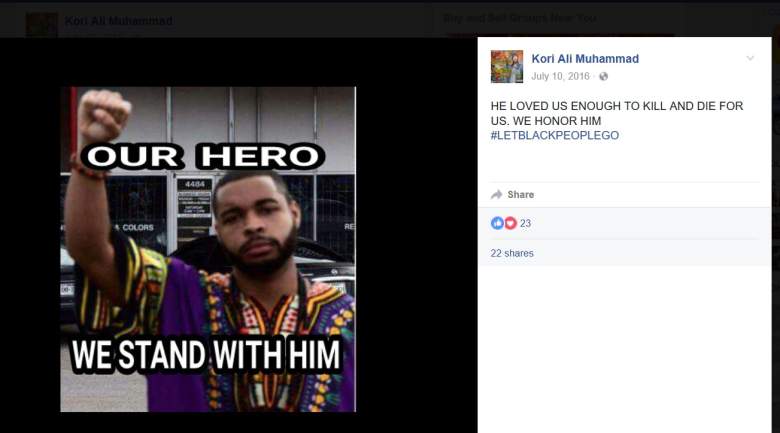 He also shared a post that labeled the killer of five Dallas police officers a “hero,” writing, “HE LOVED US ENOUGH TO KILL AND DIE FOR US. WE HONOR HIM #LETBLACKPEOPLEGO.” The Dallas police shooter, Micah Xavier Johnson was motivated by Black Lives Matter and police shootings.

1. The Gunman Randomly ‘Sprayed Rounds’ at People as He Moved Through Downtown & Was Previously Convicted of a Federal Drug Charge 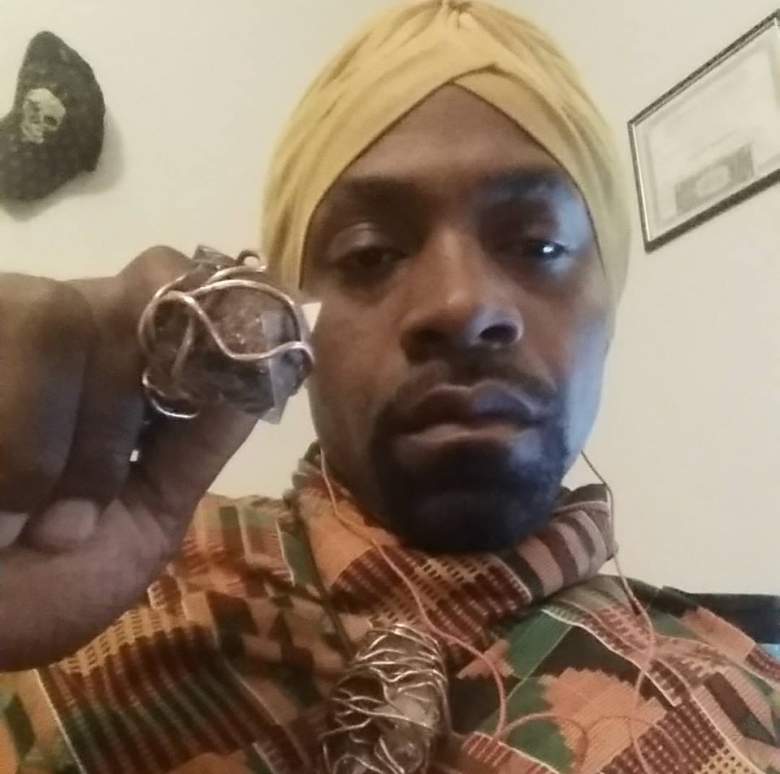 The shooting spree with multiple victims occurred in Fresno, California, with the gunman randomly “spraying rounds” at people downtown and shouting “Allahu Akbar” – which means “God is great” in Arabic – when confronted by police.

The Fresno police chief said three people shot have died in what authorities called a random attack. The Fresno Bee reported that police initially said it was unclear whether the shootings are tied to terrorism. However, the chief, Jerry Dyer, also said in the news conference, “Certainly by the statement that was made it would give that indication. I’m not certain why he said what he said today.”

CNN later reported that police were labeling the murders hate crimes and said they believe Muhammad was motivated by the men’s white ethnicity, not terrorism.

Sayed Ali Ghazvini, Islamic Cultural Center of Fresno imam, told CBS News that he didn’t know Muhammad, and the accused gunman was not a member of his congregation. The Islamic Center released a statement condemning the attack.

The Daily Beast reports that Muhammad’s posts on social media indicate he was “an adherent of a fringe religious movement called the Moorish Science Temple” like Gavin Long, the Baton Rouge police shooter. The Daily Beast notes, “It’s believers share few beliefs in common with mainstream Muslims—in fact, the holy text of the Moorish Science Temple is a re-worked ‘Koran.'”

CBS News reported that the slayings began at 10:45 p.m., with the gunman shooting and killing a passenger in a Pacific Gas & Energy utility vehicle. He walked away, shot at another person, but missed, and then shot and killed a second person, reports CBS. The final shooting occurred near a bus stop, reported CBS.

According to ABC News, police say Muhammad “noticed a white man in a utility truck and fired into it, killing Zackary Randalls. He also shot Mark Gassett on a sidewalk, then pumped two more rounds into him as he lay wounded. Finally… Muhammad fired in the direction of a bus stop where he spotted three white men. They scattered, and the gunman picked an ‘older gentleman’ who appeared to be heavier, David Jackson, and shot him twice.”

The accused gunman has a criminal history. According to federal court records, Kori Muhammad, previously known as Kori or Cory Taylor, was arrested in 2005 on federal drug charges and pleaded guilty to possession of cocaine base with intent to distribute and possession of a firearm with a prior felony conviction. According to ABC, Muhammad’s arrest history dates to when he was 13 and “includes arrests for gun possession, theft and drug charges. Records show he was arrested at least twice as a teen for possessing a gun in school.”

He received 110 months in prison, along with 92 months of supervised release, which ended early in September 2016.

One of the court documents included a motion for a psychiatric hearing because his attorney said he was suffering from hallucinations, paranoia and psychosis.

The police chief said that Muhammad has a prior criminal history that “includes making terrorist threats, weapons violations, drugs, and false imprisonment. Muhammad may have ties to gangs,” according to the Daily Beast.

Muhammad’s prolific social media posts are disjointed and rambling. On his profile, he wrote, “BLACK DRAGON LION HAWK(RA Child)” and claimed he was “Chief Executive Officer at CEO M$O Mastermind $ Organized” and “Warrior at RBG Nation.”

One of his Twitter posts referred to Trump as the “skunk Trump, the ‘white power’ leader.”

He posted about well-known police shooting victims on Twitter. “Time to reverse these police shootings,” said another graphic he shared on his Facebook page, which has now been deleted.

He also posted about the deaths of “white devils.” 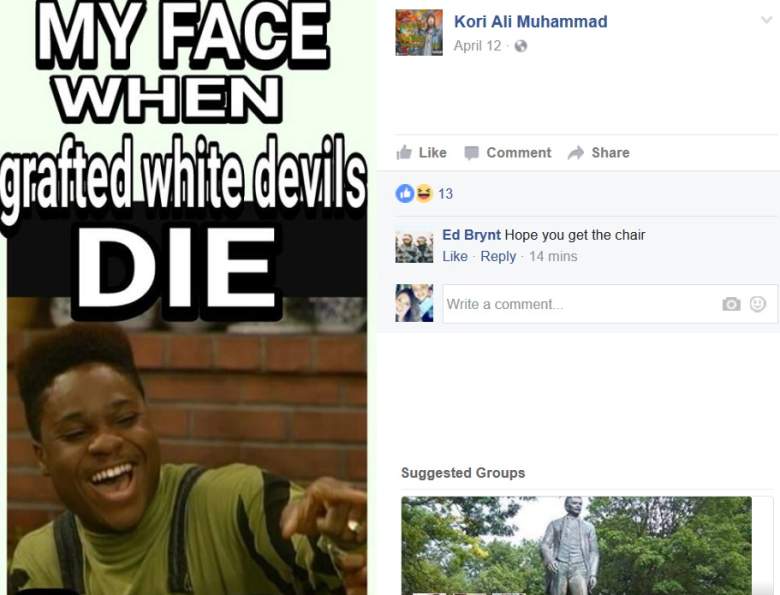 Muhammad made references to Black Lives Matter on Facebook. 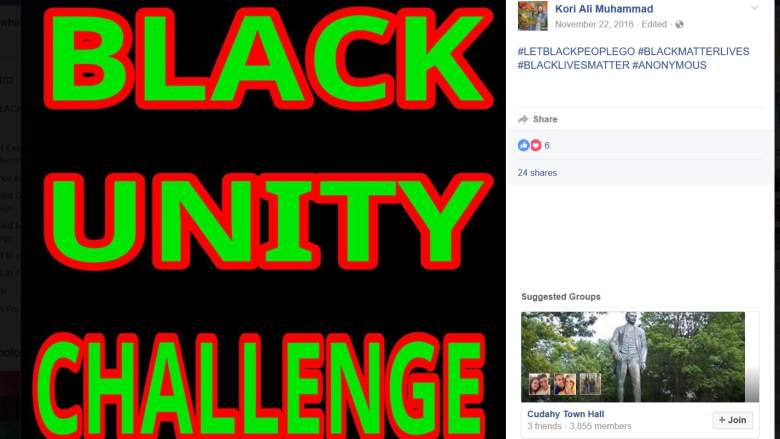 His posts have a black nationalist tone to them. Many of his posts start with rants that are hard to follow. He wrote on Facebook about being an adherent to the Nation of Islam, writing, “For the record in 1994 while in high school my biology teacher confirmed that white people are grafted from Black People and that by the law of genetics white people only have recessive genes and cannot produce no other color, confirming my question about the origin of the white race taught by The Most Honorable Elijah Muhammad.” He said the teacher “was very supportive of my decision to join the Nation of Islam and also pushed for my high school diploma to read Cory X Taylor.”

The Los Angeles Times reports that “Muhammad’s social media postings reference terms used by the Nation of Islam, which has been labeled a racist hate group by the Southern Poverty Law Center.”

For example, his references to “white devils” and “Yakub,” are from Nation of Islam mythology as Yakub is “the villainous figure responsible for creating white people,” reports the LA Times.

He also posted a graphic showing a Nazi being murdered.

The shooting spree unfolded on April 18.

According to the Fresno Bee, the Fresno gunman opened fire in the parking lot of “Catholic Charities at Divisadero and Fulton in downtown Fresno.” That wasn’t the only crime scene.

The newspaper reported that the gunman – originally described as a black male about age 25 – appeared to be randomly targeting people, shooting a man in a front yard, and then another person at a bus stop, and then a man in the Catholic Charities parking lot.

The shootings occurred over “multiple locations,” according to YourCentralValley.com.

According to the Associated Press, it doesn’t appear the shooter was associated with Catholic Charities, though.

Read more about the victims here: 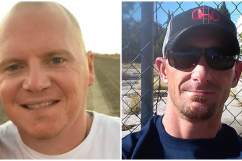 3. The Gunman Was Already Wanted in the Slaying of a Security Guard at a Motel 6 & Was Homeless

#DEVELOPING: This is Carl Williams, the security guard killed overnight at Motel 6. Memorial fund set up under his name at Bank of America. pic.twitter.com/igFRYCVRjv

Muhammad was already a wanted man; Fresno authorities were seeking him in the earlier slaying of a security guard.

According to the Sacramento Bee, police had named Muhammad, 39, the day before “as the suspect in the Thursday slaying of security guard Carl Williams at the Motel 6 on Blackstone Avenue near Ashlan Avenue.”

The 25-year-old unarmed Williams “was shot multiple times after an altercation with a man who pulled a gun, police reported,” adding that Muhammad was “armed and dangerous.”

The Bee reported that, according to police, “Muhammad is homeless and frequents areas from West Shaw and North Marks avenues to North Bullard Avenue and West Figarden Drive, along with the area near Fresno City College.”

However, his grandmother told The Los Angeles Times that he always could stay with relatives and added that she saw him on Easter Sunday and he “didn’t seem OK. He was crying, acting different from how Kori usually acts.”

4. The Shooter Reloaded & Cursed as He Fired, & Made Disturbing Rap Videos

The scene in downtown Fresno after the shooting. (Fresno Sheriff)

Witnesses described a cold and calculating killer who expressed anger as he targeted people.

The shooter paused to reload and was cursing as he opened fire on people in the parking lot, reported the Bee.

The gunman – who used a large handgun – is no longer at large, reported ABC7.

NBC Bay Area reported that the weapon was a “revolver-style gun.”

In rap videos he posted to YouTube, Muhammad pointed his fingers like a gun. In one of his videos, he talked about destroying the “white man’s world.”

There was confusion in the media at first over how many had died; first reports said one, then two, and now police say three of four April 18 victims have passed away.

Police said in a news conference that they responded to shotspotter reports and found Muhammad running down the street. “Muhammad dove to the ground,” reported Fresno Bee. That’s when he shouted Allahu Akbar, police said.

5. One of the Victims Was Driven to a Nearby Police Station but Died There & the Shooter Fired 16 Times

There was a dramatic effort to save one of the three victims’ lives, as he was driven in his utility truck to the police station. But it was too late.

The police chief said in the news conference that Muhammad fired 16 shots in one minute using “a .357 revolver outfitted with speed loaders.”

ABC7 reported that the victim was driven to the police station, where he died. “One of the victims was driven in a PG&E truck to the Fresno Police Department’s headquarters in downtown Fresno where he died,” the television station reported.

Criminal justice buildings were locked down, and streets in downtown Fresno were closed as a manhunt unfolded and police dealt with multiple crime scenes.

This story will be updated as more details are known.

Loading more stories
wpDiscuz
99
0
Would love your thoughts, please comment.x
()
x
| Reply
Kori Ali Muhammad is accused of being behind a hate crime attack in Fresno, California. He is accused of murdering four people, and shouting Allahu Akbar. Police say he targeted the victims because they are white.