President Donald Trump appeared to give the Prime Minister of Italy, Paolo Gentiloni, the middle finger while scratching his head at the G7 summit in Taormina, Sicily.

G7 stands for “group of 7” and consists of Canada, France, Germany, Italy, Japan, the United Kingdom and the United States. The group is dedicated to advancing the world’s economy as well as combating climate change under the 2015 Paris Agreement. However, as well as apparently flicking off Gentiloni, Trump’s intentions regarding American participation in the Paris climate deal, agreed to under President Barack Obama, remained unknown on Sunday, reports The Guardian.

Trump has been the odd man out at G7, apparently by choice. While all other world leaders went for a walk with each other through Taormina, Trump chose to ride in a golf cart, reports The Hill.

Not to be outdone, “The White House Facebook page failed to acknowledge First Gentleman of Luxembourg Gauthier Destenay, married to Prime Minister Xavier Bettel, in a post featuring the spouses of world leaders attending this week’s G7 summit in Sicily,” writes Newsweek. The Luxembourgians are the only gay couple of Trump’s foreign counterparts.

Trump has also been on the receiving end of the finger recently.

At the end of yesterday’s 2017 California Democratic Party convention, outgoing Party Chairman John Burton, a five-term Democratic congressman (1974 to 1983) from the San Francisco Bay area, invited all attendees to join him in a chant, according to The Washington Post. “Now all together: f*ck Donald Trump!” Burton yelled while raising both his middle fingers.

Nancy Pelosi, the Minority Leader of the United States House of Representatives also in attendance, declined to join in. 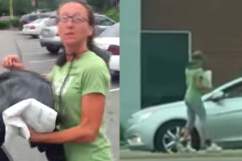 Loading more stories
wpDiscuz
10
0
Would love your thoughts, please comment.x
()
x
| Reply
President Donald Trump appeared to give the Prime Minister of Italy, Paolo Gentiloni, the middle finger while scratching his head at the G7 summit in Taormina, Sicily.