He’s also served in the U.S. Justice Department and in the Federal Bureau of Investigation. His long pedigree with the FBI and Justice have led many people to include him on the possible replacement lists for ousted FBI Director James Comey. However, Wainstein has not been a Donald Trump supporter and, in an administration that prizes loyalty, that could hurt his chances. In fact, the former Justice official signed a letter that called Trump “dangerous.”

Wainstein was listed as a “favorite of the FBI Agents Association, a group of 13,000 current and former agents,” reports USA Today.

President Trump has pledged to make a strong replacement pick for Comey, but some Democrats, angry at the Comey ouster in the midst of the FBI’s investigation into Russia, have vowed to fight whomever Trump chooses. Whether it’s Wainstein or someone else, expect a contentious confirmation battle.

It might help Wainstein that he’s already made it through Senate confirmations before. Wainstein’s family has dealt with tragedy; his elderly father was accused of striking and killing a maintenance worker in 2016.

1. Wainstein Worked on National Security Issues in the Bush Administration & Endorsed a Letter That Said Trump Would Be a ‘Dangerous President’

There’s one big reason that Wainstein might not get the nod. Wainstein “endorsed a letter opposing Mr. Trump’s candidacy, which could hurt his chances,” reports Fox News. On the other hand, that could help him get confirmation and have a perceived aura of independence, whereas some others mentioned could be suspect because of their close ties to Trump and his campaign.

However, the letter was pretty tough on Trump. It said that none of the officials who endorsed it would vote for Trump because they did not think he was qualified to be president. It also said that he lacked character and values and would be a “dangerous president” who would put the country’s national security at risk.

Wainstein has ties to the George W. Bush administration.

According to the website of his current law firm, Wainstein, in 2008, after 19 years working at the Justice Department, was named Homeland Security Advisor by President George W. Bush.

In 2006 remarks, then Attorney General Alberto Gonzales said that Wainstein “inspired the admiration and confidence of his colleagues in law enforcement at every stage of his career as a public servant. He is a career federal prosecutor who has shown equal skill in the gritty details of prosecution, as well as in the broader challenge of organizational management.”

“In this capacity, he coordinated the nation’s counterterrorism, homeland security, infrastructure protection, and disaster response and recovery efforts,” the site says. “He advised the President, convened and chaired meetings of the Cabinet Officers on the Homeland Security Council, and oversaw the inter-agency coordination process for homeland security and counterterrorism programs.”

In 2009, Wainstein was quoted in a CBS News story on Umar Farouk Abdulmutallab, who was accused of trying to blow up a Detroit airliner on Christmas Day. Wainstein told CBS that “Abdulmutallab represents the kind of operative who could be ‘a goldmine’ for al Qaeda” because he was an English speaking westernized radical who could “fly under the radar.”

Wainstein was confirmed by the U.S. Senate in 2006 as the first assistant attorney general for National Security (a track record of a successful confirmation could cause Trump to look more favorably on Wainstein, as some Democrats have said they want to stymie the confirmation of the new FBI director).

At DOJ, his law firm says, Wainstein “established and led the new National Security Division, which consolidated DOJ’s law enforcement and intelligence activities on counterterrorism and counterintelligence matters, and also oversaw the Department’s role in regulatory mechanisms such as the Committee on Foreign Investment in the U.S. (CFIUS).”

2. Wainstein Investigated a NC Chapel Hill Athletics Controversy & Has Experience at the FBI

The fact that Wainstein has already worked for the FBI could work in his favor.

He served as “General Counsel of the Federal Bureau of Investigation and then as Chief of Staff to Director Robert Mueller,” his law firm’s website says.

“At the FBI, Ken was involved in myriad sensitive national security and criminal enforcement matters, as well as a variety of civil litigation, managerial, and Congressional oversight issues,” the site says. “In 2001, Ken was appointed Director of the Executive Office for U.S. Attorneys, where he provided oversight and support to the 94 U.S. Attorneys’ Offices.”

He is also a Georgetown University Law School adjunct professor. Georgetown says Wainstein is currently “a partner in O’Melveny’s Washington, DC office, and a member of the White Collar Defense and Corporate Investigations Practice. He focuses his practice on handling civil and criminal trials and corporate internal investigations.”

Wainstein conducted an independent investigation into irregular classes at the University of North Carolina at Chapel Hill. According to the News Observer, the 131-page report detailed “18 years of fake classes in the African and Afro-American Studies department” and “delivered a staggering blow to UNC-Chapel Hill’s academic reputation and to its athletics programs.”

3. Wainstein Attended Law School at Berkeley & Was a U.S. Attorney in Washington D.C. 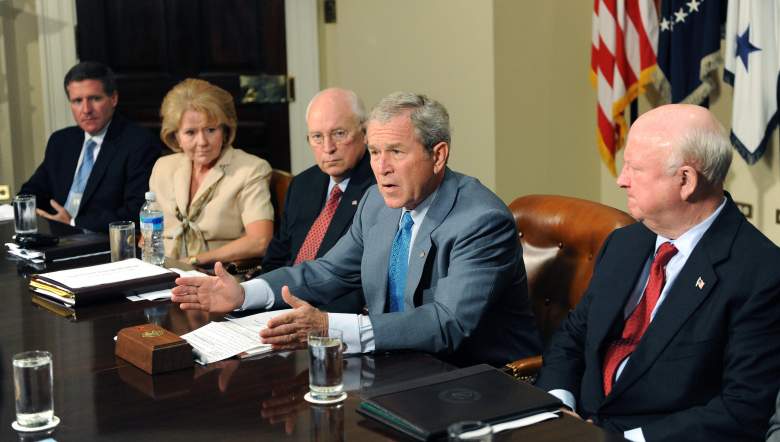 US President George W. Bush talks about the aftermath from Hurricane Gustav during a briefing with members of his Cabinet including Ken Wainstein on far left. (Getty)

Wainstein has worked as a government prosecutor in top positions.

In 2004, “he was appointed, and later confirmed as, the United States Attorney in Washington, DC, where he managed the largest U.S. Attorney’s Office in the country and oversaw a number of high-profile white-collar and public corruption cases,” his law firm website says.

At Berkeley, he was “a moot court board member and the Note and Comment Editor of the California Law Review,” the site says.

After law school, he served as law clerk to the Honorable Thomas Penfield Jackson of the U.S. District Court in the District of Columbia. In 2000, Penfield famously ruled that Microsoft was a “predatory monopoly” that needed to be broken up, but the decision was reversed on appeal, according to The New York Times. He also presided over the Marion Barry trial.

4. Wainstein’s Elderly Father Was Involved in a Tragic Accident

"Should be something that encourages administrators to get the facts out, be transparent." – Ken Wainstein pic.twitter.com/SRwqXwiSrS

Wainstein’s family saw its share of tragedy when, in August 2016, his 92-year-old father, Leonard, was criminally charged with killing a motorist in a fatal crash, according to The Washington Post.

Leonard Wainstein was accused of striking and injuring a parking attendant while trying to park at a bank and then accelerating and striking and killing a maintenance worker, Jeremais Herrera Rodriguez, reports The Post. He was charged with two counts of reckless driving, The Post reported, adding that authorities did not believe there was malicious intent.

“Our family’s heart is breaking for Mr. Rodriguez and his family, and we send our very deepest sympathies to his loved ones,” Kenneth Wainstein said in a statement obtained by The Post.

5. Wainstein Is Married & Has Two Daughters With His Wife, Elizabeth

IAmBiotech: Fmr US Homeland Security Advisor Ken Wainstein: "Biodefense has not had the centralized leadership it … pic.twitter.com/t0zTkE2Y5c