A high school principal in Pittsburgh is under fire after controversial video and audio recordings circulated of his interactions with students.

Kevin Murray was put on leave when one of the recordings surfaced but will return as principal – and as the head football coach, a new assignment in a school that, in 2010, had the most NFL players of any high school in the country, with six. The videos were released on May 3 by the attorney representing a youth who says a school police officer named Stephen Shaulis allegedly knocked out the tooth of the teenager.

The attorney for several of the youths has claimed that federal authorities are looking into at least four abuse allegations at Woodland Hills High School, allegations school officials have hotly denied. Murray’s supporters have painted him as a disciplinarian who loves working with youths.

Woodland Hills School District has a long history of racial tensions; the district was created in 1981 as a result of a judicial order designed to force Pittsburgh to desegregate its schools, according The Pittsburgh Post-Gazette. The action was taken after African-American parents complained decades ago that Pennsylvania had created segregated schools, and the district was under federal court supervision as late as 2000. At least some of the youths involved in the current allegations are black, whereas Murray and Shaulis are white.

1. Murray Was Disciplined for a ‘Verbal Tirade’ Against a Special Education Student

There are both audio and video recordings that feature Murray.

According to TribLive, Murray was placed on leave after a “controversial recording surfaced of a verbal tirade involving a special-education student.”

The superintendent, Alan Johnson, said Murray was disciplined but will return to his job. TribLive quoted the superintendent as saying, “I’m still deeply disappointed in the principal, and he knows that. And he is disappointed in himself. He will be returning, and we believe this was an anomaly. This was not representative of who he is and things he has done at Woodland Hills.”

The District Attorney reviewed the case but is not pressing charges. The DA told TribLive that the recording, which was secret, could not be used in court. Murray is heard telling the 14-year-old student “I’ll punch you right in your face, dude,” and “I’ll knock your (expletive) teeth down your throat,” according to TribLive.

The DA’s office is still investigating separate allegations against Officer Shaulis and a student at the school, The Pittsburgh Post-Gazette reports.

According to the newspaper, the student in the Murray recording incident, who was not identified, “was charged with violating wiretapping laws and sentenced to probation.” Activists have claimed there is a pattern of students being charged with crimes. However, Murray and his attorney say the  entire incident was mischaracterised, with the attorney saying the principal is a disciplinarian and that the incident had nothing to do with race. Rather, the attorney told the Pittsburgh Post-Gazette, the youth in question had been “disrespectful” to a female employee.

2. Murray Is Captured on Videos That Show Altercations Between a Police Officer & Students

Todd Hollis, an attorney for a student captured in one of the videos, released video from a March 3, 2015, incident in which Officer Steve Shaulis “appears to use a stun gun during a struggle with a student. Woodland Hills High School Principal Kevin Murray holds the student down on the ground as Shaulis appears to administer the stun gun three times,” according to TribLive.

According to CBS Pittsburgh, the youth in that video was 15 at the time and “was asked to leave class and report to the office. The video shows school resource officer Steve Shaulis putting the teen in a headlock.” The television station quoted Hollis as saying: “Body slams him to the ground. Here comes Principal [Kevin] Murray. He holds the kids’ head down into the carpet, Shaulis is deploying his Taser.”

That teen faced a criminal charge but was “acquitted of that charge during a trial in which the tape was played,” receiving a disorderly conduct citation instead, said the television station.

CBS Pittsburgh reported that Hollis released the videos at a May 3 news conference. “If a picture speaks a thousand words… a video has to speak a million,” Hollis said, according to the television station.

In addition, reported the newspaper, the attorney is claiming a 14-year-old youth named Que’chawn Wade was beaten up by Shaulis, who allegedly knocked his tooth out. Although that second video, from April 2017, doesn’t show the moment of that allegation, according to TribLive, it does show Murray “walking through the office lobby several times, before and after the incident, but he does not appear to get involved in the physical altercation.” Shaulis is also accused of using a gay slur.

According to the Pittsburgh Post-Gazette, the fourth student is “a 15-year-old girl who alleges similar altercations and ‘fabricated’ criminal charges in two incidents at the school in 2015 and late 2016.” 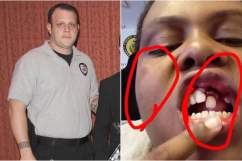 3. Murray Was Named the School’s Head Football Coach Despite Some Parental Protests

Despite all of the questions swirling around him, Murray was just named the school’s head football coach in April, according to TribLive. Football is a big deal at Woodland Hills; in 2010, the school had six active NFL players, the most of any school in the country, according to the Pittsburgh Post-Gazette, which reported: “The New York Jets’ Jason Taylor, Arizona’s Steve Breaston, New England’s Rob Gronkowski, Pittsburgh’s Ryan Mundy, Miami’s Lousaka Polite and San Francisco’s Shawntae Spencer played at Woodland Hills.”

The appointment came at a raucous board meeting dominated by protests and boos. However, most people present at a December 2016 School Board meeting, after the audio recording surfaced, spoke in favor of Murray:

The allegations about the students were already known for some time; the new twist is that the attorney has released some video surrounding the incidents.

The Pittsburgh Post-Gazette reported that Murray “will continue his full-time job as principal while also doing the $12,000-a-year coaching job” and was granted the new assignment even though parents showed up to protest at the School Board meeting in April.

The outgoing coach was booed when he advocated Murray’s choice, saying, “He loves the kids and that’s what’s most important to him,” according to the newspaper.

4. Wade’s Attorney Has Challenged Murray to a Charity Boxing Match

Wade’s Pittsburgh attorney, Hollis, challenged Murray, Shaulis, and Johnson to a charity boxing match in a post he made to social media.

If any one of you want to do a charity grudge BOXING match. Get in touch.”

Judging from the reaction, such a match appears highly unlikely to happen.

Phil DiLucente, an attorney who represents both Shaulis and Murray, criticized Hollis’ boxing match offer in an interview with TribLive.

“I am disappointed by the most recent social media post made by Mr. Hollis regarding two of my clients,” he said. “I would caution any further untruths being spoken or written in public regarding my clients, Mr. Murray or Officer Shaulis.”

DiLucente said it was false to say “that my clients beat up kids. He (Hollis) capitalized BEAT.” Of the Wade incident, DiLucente told CBS Pittsburgh, “Mr. Murray was in the vicinity, but Mr. Murray did not participate whatsoever.”

The attorney told The Pittsburgh Post-Gazette of Murray, “Principal Murray has nothing but love and admiration and respect for the over 10,000 children he has seen go through the Woodland Hills School District doors and become productive members of our society. However, he will not tolerate misbehavior.”