“Director Comey enjoyed broad support within the FBI and still does to this day,” McCabe told the Senate Intelligence Committee.

McCabe also told the committee that there hadn’t been any direct “effort to impede” the investigation into possible ties between the 2016 Trump campaign and Russia. “You cannot stop the men and women of the FBI from doing the right thing, protecting the American people, and upholding the Constitution,” McCabe said.

McCabe also said he disagrees with Sanders’ statement that the Russia investigation isn’t a priority for the FBI.

“That’s probably one of the smallest things that they’ve got going on their plate, and the 20,000 employees that work there,” Sanders said of the Russia investigation. McCabe disagreed, calling the investigation “highly significant.”

He also said that he couldn’t talk about the conversations between the president and Comey that Trump mentioned in the termination letter. Trump wrote that Comey told him on “three separate occasions” that he is “not under investigation.” But what Trump was referring to remains unclear.

“I can’t comment on any conversations the director may have had with the president,” McCabe said during his testimony.

Politico previously reported hours after Comey was fired that many agents were stunned by the news, which they learned from TV reports or the Internet. “I’m literally in tears right now. That’s all I have to say,” a longtime special agent told the site.

“We just have no idea why this happened. No idea,” another agent who worked with Comey told Politico. “No one knew this was coming. Everyone is just shocked that this happened.” 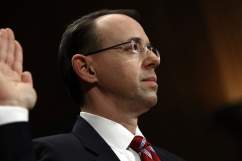 REPORT: Rod Rosenstein Wanted to Quit After Trump Pinned Comey Firing on Him