A current White House official is a “significant person of interest” in the Russian investigation, The Washington Post is reporting.

That would be a major development because it’s the first indication that the probe may extend inside the White House rather than focusing on previous campaign officials, as was reported before. The story created a firestorm on Twitter as Trump headed overseas for his first foreign trip.

The Post based its story on anonymous sources. It says, “The senior White House adviser under scrutiny by investigators is someone close to the president” and adds that it is basing the claim on “people familiar with the matter.”

“Current administration officials who have acknowledged contacts with Russian officials include President Trump’s son-in-law, Jared Kushner, as well as Attorney General Jeff Sessions and Secretary of State Rex Tillerson,” the Post wrote, while not naming the person of interest. 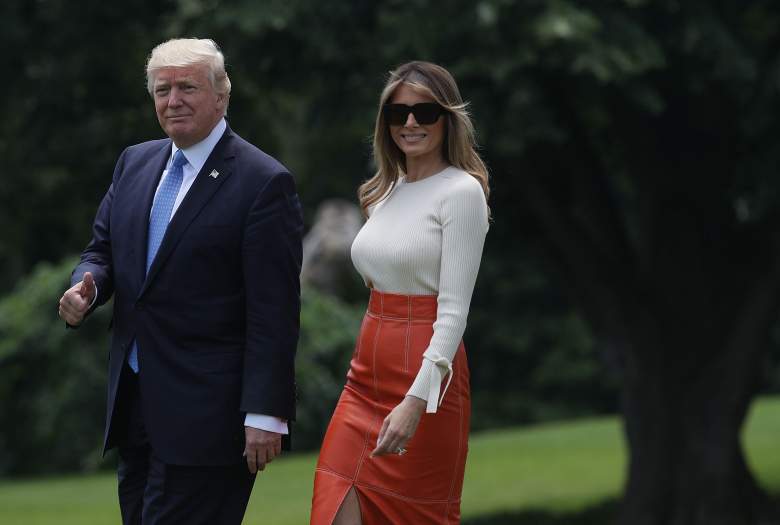 U.S. President Donald Trump (L) and first lady Melania Trump (R) walk on the South Lawn prior to their departure from the White House May 19, 2017 in Washington, DC. (Getty)

The White House has added fuel to the story by not outright denying it.

Asked about the Post story, Trump’s spokesman Sean Spicer told reporters, “As the President has stated before — a thorough investigation will confirm that there was no collusion between the campaign and any foreign entity.”

Being a person of interest does not mean that someone committed a crime. It means that a person is being investigated to see whether they committed a crime. But it’s the first time that, if the Post account is true, the Russian investigation has reached so directly into the heart of the White House, rather than focusing on campaign officials with whom Trump previously parted ways, and it comes after Trump’s high-profile firing of FBI Director James Comey, who was presiding over the investigation into whether Trump’s campaign colluded with Russian interference into the 2016 presidential election.

If the Russia probe is focusing on a White House official, that person’s advice on Comey’s firing could theoretically come into play as Trump also fends off criticism that he opened himself up to obstruction of justice claims with the Comey ouster.

A Twitterstorm has erupted over speculation into the identity of the “significant person of interest,” as the Post story said the sources would not identify the person. Almost 70,000 tweets had been written by Friday evening on May 19 speculating on one official in particular after a New York Magazine and Daily Beast reporter, Yashar Ali, tweeted a name and wrote, “Have confirmed this with four people. I’m not speculating.” The Good Men Project describes Ali as “a Los Angeles-based blogger, commentator, and political veteran.” He also writes for The Huffington Post, which describes him as a “freelance reporter” who lives in New York.

The UK Independent then reported on the Ali tweet, and a few other mainstream media reporters implied the same on Twitter. Other sites then reported on the speculation on Twitter, but it all appeared to derive from the Ali tweet. However, mainstream media outlets had not confirmed the name being thrown out on Twitter. It’s a case study in how Twitter accounts can outpace actual evidence. Heavy is not reporting the name until there is additional confirmation due to the seriousness of the claim.

The Washington Post report comes as Trump heads overseas and as The New York Times broke a separate story that claims, also using anonymous sources, that Trump called ousted FBI Director Comey a “nutjob” to Russian officials and allegedly said that firing Comey relieved “great pressure” on him. The Times based that account on a memo that was read to a reporter by an anonymous source.

For his part, Comey once called Trump “crazy,” according to a previous story in the Times. A short time after the “nutjob” report, it was announced that Comey has agreed to testify before the Senate Intelligence Committee in public session after Memorial Day. The likely focus: Reports that Comey wrote memos that allegedly say Trump tried to get him to kill the Russian probe.

Tensions grew so high that Comey allegedly tried to blend in with blue curtains to avoid having to interact with the president.

As the Russian questions heat up, Trump is heading overseas on the five-country visit, his first foreign trip, which will span more than a week. Trump is being accompanied on the trip by First Lady Melania Trump, Chief of Staff Reince Priebus, his daughter, Ivanka, her husband, Jared Kushner, Steve Bannon, Stephen Miller, communication staffers, and others. Here’s the full list:

Here's a list of the West Wing power players traveling with President Trump on his first international trip https://t.co/BJBUPIG4A8 pic.twitter.com/sgl8OOdiGw

Air Force One’s taking off for the overseas trip in the midst of the breaking news stories started another Twitter trend, with jokes flying around imagining the atmosphere on the plane as news of the Post story circulated.

…now we go live inside Air Force One pic.twitter.com/BtIxpfcUPs

According to the White House, the “five-stop trek” will encompass the Kingdom of Saudi Arabia, Israel, Rome, Brussels, and Sicily, returning to Washington, DC, on Saturday, May 27, 2017.” Trump will give a speech on Islam in Saudia Arabia, his first stop, and will also go to Vatican City. He will attend the G7 and NATO summits on the foreign trip, his first as president.

As for Kushner, Sessions, and Tillerson, their admitted Russian contacts are well known, although that does not mean that one of them is necessarily the person of interest, of course.

Secretary of State Tillerson was CEO of Exxon Mobil and, as such, “frequently worked with the Russian government on a wide range of business projects and was even awarded with a prestigious Order of Friendship by Moscow,” reports the Hill. CNN reported on May 19 that “The State Department is withholding a document related to Secretary of State Rex Tillerson’s communications with the department about Russia in his capacity as ExxonMobil Chairman and CEO.”

The New York Times reported in April that Kushner had omitted contact with foreign officials, including Russian officials, from security clearance forms, with his spokesman calling it an error. According to the Atlantic, it included failure to “disclose dozens of contacts with foreign officials, including a conversation with Russian Ambassador Sergey Kislyak and a meeting with the head of Vnesheconombank, a state-owned Russian bank.”

Attorney General Jeff Sessions met twice with the Russian envoy as a senator and created controversy when he didn’t initially disclose the contacts during his confirmation hearing.