Less than two weeks after an ISIS-inspired terrorist attack took place at her concert, Ariana Grande hugged injured fans and took photos with them on a visit to a Manchester hospital.

The 23-year-old singer returned to the city where 22 people were killed and hundreds more were injured after a nail bomb was set off by Salman Abedi on May 22. She’s back in town for a benefit concert that she planned to honor the victims of the attack, and she used Friday as an opportunity to surprise her fans.

Grande visited the Royal Manchester Children’s Hospital to greet young victims that were injured in the attack.

On May 26, Grande released a statement expressing her sympathy for those who lost their lives or were injured in the attack at her show.

“I am so sorry for the pain and fear that you must be feeling and for the trauma that you, too, must be experiencing,” she wrote. “We will not quit or operate in fear. We won’t let this divide us. We won’t let hate win.”

She also announced that she would be back to the city in no time for a concert to raise money for the victims and the families.

That concert, called One Love, is set to take place June 4 and includes performances from Grande, Justin Bieber, Coldplay, Katy Perry, Miley Cyrus, Pharrell, Usher, Take That and Niall Horan. All of the money raised from the concert will be donated to the We Love Manchester Emergency Fund. A live broadcast will be airing on Freeform starting at 2 p.m. EDT, and ABC will have a one-hour highlight of the concert after the NBA Finals’ Game 2.

But Friday was meant for Grande to show her love to her fans, and they embraced her. Many posted selfies with the singer and had over joyous reactions to the surprise.

Here are some photos from the surprise visit to the hospital:

@ArianaGrande I love you ? pic.twitter.com/bQVRuJ7V8g

Tonight's visit from @ArianaGrande was amazing. Just the lift all the kids (and parents) needed! What an absolute angel ❤️ pic.twitter.com/TD9tHvTDeu 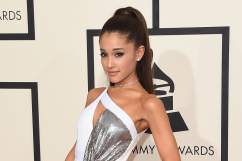