Members of the Republican congressional baseball team gather for a prayer before the start of the Congressional Baseball Game at Nationals Park on June 15, 2017 in Washington, DC. (Getty)

Following the attack, it was unclear if the game, set for tonight at the Washington Nationals Park at 7:05 p.m., would continue. Many said it would be canceled until it was announced just hours after the attack that it would not be.

You can watch the game live below:

“It shouldn’t take an incident like this to bring us together,” Democratic Rep. Mike Doyle of Pennsylvania told reporters at a joint news conference alongside GOP Rep. Joe Barton of Texas. “At times of tragedy, Americans do that. Joe and I have been reflecting a lot lately on how we can still maintain our principles and our legislative agendas, but we could do it in a more civil way. And when the leadership of this country is civil toward one another, maybe the public will start being civil toward one another too. And the news media will be civil towards members of Congress and the public. And we will change the mood in this country so that people don’t get filled up with this kind of hatred.”

The congressional baseball game is on for tomorrow night.

The game is an annual tradition dating back to 1909. However, it hasn’t happened every year and has been interrupted by such events as the Great Depression, the Second World War, and other political upheavals. The game raises money for three local charities: The Boys and Girls Clubs of Greater Washington, The Washington Nationals Dream Foundation, and The Washington Literacy Center, writes NBC News.

In its history, Democrats have won 39 games, Republicans 42, and there has been one tie.

C-Span has also announced that they will air the game this year. Learn how to watch the baseball game online here:

If you don’t have a television provider to sign in with, the Congressional Baseball Facebook page will also carry it here. 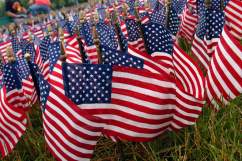