People watch the midsummer sun as it rises over the megalithic monument of Stonehenge on June 21, 2005 on Salisbury Plain, England. Crowds gather at the ancient stone circle to celebrate the Summer Solstice; the longest day of the year in the Northern Hemisphere. (Peter Macdiarmid/Getty Images)

Happy first day of summer! Also known as the summer solstice, today is the longest day of the year and the official start of summer for those in the Northern Hemisphere. Today, the sun will shine directly over the Tropic of Cancer while the North Pole reaches its maximum tilt towards the sun, making it the longest day of the year. The farther north a person goes, the more daylight they can expect to have. The North Pole will have 24-hours of daylight, known as “the midnight sun.”

In the United States, the solstice will begin today at 12:24 a.m. EDT. According to Time and Date, “In terms of daylight, this day is 5 hours, 50 minutes longer than on the December Solstice.” The Washington Post writes that American cities can expect anywhere between 22 to 13 hours of daylight, depending on their latitude. The average duration of daylight is 12 hours/day, but this highly variable depending on geographic location.

Learn more about the history and origins of the summer solstice here:

1. It Is 1 of 4 Seasonal Astronomical Events

The northern hemisphere will be having its #SummerSolstice with shortest night of the year and the Arctic Circle completely in sunlight. pic.twitter.com/BRQXgyxNUW

The summer solstice lands on either June 20, 21, or 22 every year in the Northern Hemisphere. It is one of the four seasonal astronomical events that impacts earth. The other three are the fall or autumnal equinox, the winter solstice, and the summer or vernal equinox.

There are two solstices a year: the summer solstice and the winter solstice, which are not to be confused with “equinoxes.” Equinoxes occur in fall and spring and mean “equal night” in Latin, which means that both day and night get 12-hours. “Solstice” means “sun still” which means that depending on which direction the earth is tilted, it will receive more of either daylight or darkness. The summer solstice is known as the longest day of the year because the Northern Hemisphere is tilted towards the sun. While the Northern Hemisphere enjoys the extra sun, those living in the Southern Hemisphere will be experiencing the opposite: the Winter Solstice.

With sunrise at 4:52 & sunset at 8:52., #Spokane enjoys 16 hours of daylight on the #SummerSolstice! COOL graphic from @Climatologist49 pic.twitter.com/A8rb06VLyV

2. The Winter Solstice Is Opposite

People look towards the sun as druids, pagans and revellers gather at Stonehenge, hoping to see the sun rise, as they take part in a winter solstice ceremony at the ancient neolithic monument of Stonehenge near Amesbury on December 21, 2016 in Wiltshire, England. (Matt Cardy/Getty Images)

Solstices occur in the summer and winter. The winter solstice comes a few days before Christmas on December 20 or 21.

For inhabitants of the Northern Hemisphere, the winter solstice process becomes most noticeable around December 1 when the sun appears to “move” south and get smaller. By the day of the actual winter solstice, the sun has reached its lowest point in the sky at -25.5°. Once it has reached this lowest point, an interesting thing happens: the sun appears to stop moving south for three days. After this, the sun moves 1° north, announcing the coming of spring. It will continue to move northward until the summer solstice when it reaches its highest point.

Other gods and goddesses said to die and resurrect during this time include Baal, Melqart, Adonis, Tammuz, Dionysus, Ishtar, Persephone, and Bari.

Besides the death and resurrection of gods, another common theme of the winter solstice is “starting new,” which can be reflected in modern times as New Year’s resolutions.

In older times, vestiges were sometimes burned to symbolize the rebirth of a new self and the destruction of past sins.

3. The Summer Solstice Is a Holiday Celebrated by Pagans

Revellers watch the sunrise as they celebrate the pagan festival of Summer Solstice at Stonehenge in Wiltshire, southern England on June 21, 2015.
(NIKLAS HALLE’N/AFP/Getty Images)

Northern European pagans still celebrate the summer solstice with a festival known as Midsummer, where many gather to watch the sun reach its highest point in the monolithic structures known as Stonehenge. Other modern day celebrations of Midsummer include giant bonfires. Since Christian times, the Catholic Church tried to integrate the festival into a created holiday known as the Feast of St. John the Baptist, which this year is on Saturday, June 24. It celebrates the birth of John the Baptist, the prophet who baptized Jesus Christ.

The date is supposed to be six months before Christmas but falls a day short of it. According to Catholic Culture, the reasoning behind this “lies in the Roman way of counting, which proceeded backward from the Kalends (first day) of the succeeding month. Christmas was ‘the eighth day before the Kalends of January’ (Octavo Kalendas Januarii). Consequently, Saint John’s Nativity was put on the ‘eighth day before the Kalends of July.’ However, since June has only thirty days, in our present (Germanic) way of counting, the feast falls on June 24.”

Before Christianity, ancient Romans would hold a festival during the summer solstice to honor the god Summanus. Summanus was the god of nocturnal thunder, as counterposed to Jupiter (Zeus), the god of daylight thunder. Summanus could be viewed as Jupiter’s “dark twin.” Decoded Past writes, “At one time, Summanus was more popular than Jupiter. But by the time of Emperor Augustus, he slipped into being a nearly-forgotten deity whose past significance was lost, and who eventually only survived in memory as a dark, underworld deity.”

The summer solstice was also celebrated by various, pre-Christian cultures in Northern Europe. Modern day Midsummer festivals are a relic of the past that include bonfires meant to drive away evil spirits and witches.

4. The Midnight Sun Is Visible in the Arctic Circle

Midnight sun reflects off the face of ridges on the West Coast of Spitsbergen on the morning of Midsummer on June 21, 2008 in Longyearbyen, Norway. Longyearbyen is the seat of Norwegian local administration in Svalbard, 620 miles south of the North Pole. (Chris Jackson/Getty Images)

For the Arctic Circle, the midnight sun is viewable during in Alaska, Canada, Greenland, Iceland, Finland, Norway, Russia, and Sweden.

The midnight sun is visible in the Arctic Circle from June 12 until July 1.

5. It’s the Astronomical Summer, Not the Meteorological Summer

People relax in deck chairs on the beach in Brighton, England on July 18, 2014. (CARL COURT/AFP/Getty Images) 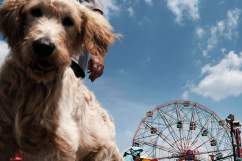 Read More
5 Fast Facts, Holidays
Happy first day of summer! Also known as the summer solstice, today is the longest day of the year and the official start of summer for those in the Northern Hemisphere.