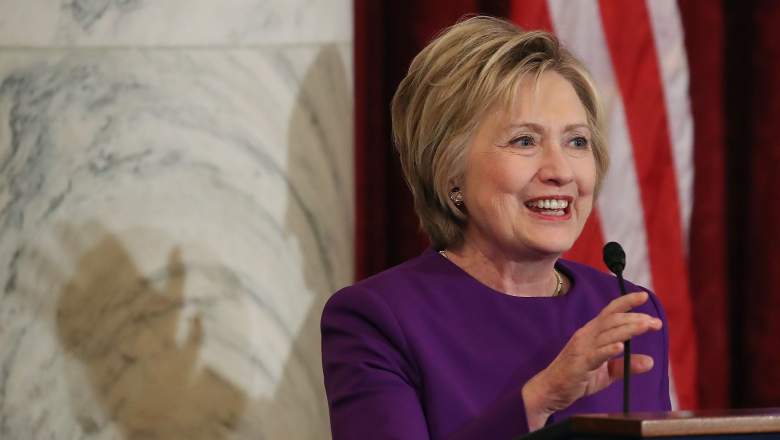 During a talk at a coding conference, Hillary Clinton criticized the DNC and the Democratic Party for being partly to blame for why she lost the 2016 presidential election.

You can watch the videos, and read a transcript below.

In particular, speaking candidly at the Recon Coding Conference, Clinton trashed the DNC’s data operations and its financial solvency. She also implied that President Donald Trump’s campaign colluded with Russians in the WikiLeaks hack of her campaign chairman’s emails as well as the dissemination of fake news, accusing the Russians of using 1,000 agents to meddle in the election.

Clinton’s comments were met with swift denunciation by both Trump and Andrew Therriault, the DNC’s director of data science. Now the data director for the City of Boston, Therriault unleashed a double expletive when referring to Clinton’s comments (he called them f**king bullsh*t, and then deleted the tweet).

Others also criticized the remarks.

I worked with DNC data every day last cycle, on winning Gov races. It was accurate and up-to-date and I'm grateful for their hard work.

For his part, Trump tweeted that Clinton was refusing to say she was a “terrible candidate.”

Crooked Hillary Clinton now blames everybody but herself, refuses to say she was a terrible candidate. Hits Facebook & even Dems & DNC.

What did Clinton actually say? Here are the videos of her comments, along with a transcript.

She criticized the DNC and Democratic Party data operations.

“So I set up my own campaign, and we have our own data operation. I get the nomination. So I’m now the nominee of the Democratic Party. I inherit nothing from the Democratic Party. I mean, it was bankrupt. It was on the verge of insolvency. Its data was mediocre to poor, non-existent, wrong. I had to inject money into it. The DNC to keep it going.”

She praised the Republican data efforts.

“OK. Donald Trump, who did nothing about really setting up any kind of data operation inherits an RNC data foundation, that after the Republicans lost in 2012, and they thought they had a very good operation with the set up that Romney did, called Orca, they thought that was really state of the art, they lose. So they raised best estimates are close to $100 million. They brought in their main vendors. They basically said we will never be behind the Democrats again. And they invested between 2012 and 2016 $100 million to build this data foundation. They beta tested it. They ran it.”

She said “about 227,000 surveys” were sent out “to double triple and quadruple check the information.”

“So Trump becomes the nominee, and he is basically handed this tried and true effective, foundation. Then you’ve got Cambridge Analytica, and you know, you can believe the hype on how great they were or the hype on how they weren’t, the fact is they added something, and I think again we better understand that. The Mercers did not invest all that money just for their own amusement. We know they played in Brexit. And we know that they came to Jared Kushner and they basically said we will marry our operation which was more as it’s been described psychographic, sentiment, a lot of harvesting of Facebook information. We will marry that with the RNC. On two conditions, you pick Steve Bannon and you pick Keyllanne Conway. And then we’re in.”

She said that Trump agreed.

“Trump says fine, who cares, right. So Bannon, who had been running the Breitbart operation supplying a lot of the untrue, false stories. (Let’s start saying lies, the moderator interjects). Yeah. We know. So they married content with delivery and data. And it was a potent combination. Now. The question is where and how did the Russians get into this, and I think it’s a very important question. So I assume that a lot of the people may have and you haven’t I hope you will, read the declassified report by the intelligence community that came out in early January. Seventeen agencies all in agreement, which I know from my experience as a senator and secretary of state is hard to get. They concluded with high confidence that the Russians ran an extensive information war campaign against my campaign to influence voters in the election.”

Here is the video in which Clinton then expands on her comments about the Russians:

Hillary Clinton: Russians Influenced Voters In The Election | CNBCFormer Secretary of State and 2016 Democratic Presidential Nominee Hillary Clinton speaks with Recode's Kara Swisher and The Verge's Walt Mossberg at the Code Conference about her loss in the election and how Russia and technology played into that. » Subscribe to CNBC: cnb.cx/SubscribeCNBC About CNBC: From 'Wall Street' to 'Main Street' to award winning…2017-05-31T21:19:54.000Z

“They did it through paid advertising, we think, they did it through false news sites, they did it through these 1,000 agents, they did it through machine learning, which kept spewing this stuff out over and over again, the algorithms they developed. That was the conclusion, and I think it’s fair to ask, how did that actually influence the campaign and how did they know what messages to deliver. Who told them. Who were they coordinating with or colluding with because the Russians historically in the last couple of decades and increasingly are launching cyber attacks, and they are stealing vast amounts of information, and a lot of information they’ve stolen, they use for internal purposes to affect markets, to affect intelligence services and so forth. This was different because they went public and they were conveying this weaponed information and the content of it.”

She accused the Russians of running fake news sites.

“And they were running, you know there’s all these stories of all these guys over in Macedonia who are running these fake news sites. I’ve seen them now and it looks like you know a low-level CNN operation. Or a fake newspaper, and the Russians in my opinion and based on the intel and counter intel of people I talked to could not have known how best to weaponize that information unless they had been guided. Guided by Americans, and guided by people who had polling and information. Let me just finish because this is the second and third step. We know they did that. We understand it.”

She provided an example.

“Best example. So within one hour of the Access Hollywood tapes being leaked, within one hour, the Russians, let’s say WikiLeaks, same thing, dumped the John Podesta emails. If you have ever read the John Podesta emails, they are anodyne to boredom. Forgive him for what he said about you. They were run of the mill emails, especially run of the mill for a campaign, should we do this, what should we say, the stuff that is so common, basic. Within one hour they dumped them, and then they began to weaponize them. They began to have some of their allies in the Internet world, like infowars, take out pieces and began to say the most outrageous, outlandish, absurd lies you can imagine. They had to be ready for that. They had to have a plan for that. They had to be given the go ahead. This could be the end of the Trump campaign, dump it now. And then let’s do anything we can to weaponize it. We know it hurt us.”

She then linked the efforts to James Comey and his letter about her emails.

“As I explain in my book, the Comey letter which was, now we know, partly based on a false memo from the Russians. It was a classic piece of Russian disinformation. Compromat they call it. For whatever reason, and I speculate, but I can’t look into the guy’s mind, he dumps that on me on October 28, and I immediately start falling, but what was really interesting, since the mainstream media covered that as I say like Pearl Harbor, front pages everywhere, huge type etc., and all the Trump people go around screaming lock her up and all that, but at the same time, the biggest Google searches weren’t for Comey because that was still out there, it was for WikiLeaks. So voters who are being targeted with this false information are genuinely trying to make up their minds – what does it mean.”

Read More
Breaking News, Donald Trump, Hillary Clinton, Politics
Hillary Clinton criticized the DNC and Democratic Party during a talk that focused on the Russians and data operations. Watch the video and read a transcript.