However, was Loughner a Democrat or Republican? What was his political affiliation? It’s not that simple.

Loughner was a registered Independent, but, unlike James T. Hodgkinson, he didn’t leave behind an obvious political motive. His ideologies are fairly complicated, but, as CBS News noted in 2011, a former friend “wrote he (Loughner) had once been ‘very liberal’ and added, ‘he was leftwing when I knew him in hs & college, 3 years ago. So he may have changed, who knows.'” He did share some fringe views of both the extreme left and right, though, but was mentally ill and was angry at how Giffords responded to a question he asked at one of her events.

In 2012, Loughner was sentenced to life without parole for shooting Giffords. According to CNN, “Loughner walked up and shot her in the head during her meet-and-greet event with constituents outside a Tucson grocery store on January 8, 2011. A federal judge, a congressional aide and four others were killed and 12 other people suffered wounds.” Loughner’s “history of mental illness” was a factor at trial, CNN reported.

Tucson shooter was a paranoid schizophrenic who believed grammar was a conspiracy. NY Times is completely wrong. https://t.co/FJSvT5RqY3 pic.twitter.com/C5kSfcYzzU

The newspaper blamed Sarah Palin’s political action committee for releasing a map that showed the electoral districts of Giffords and other Democrats “under stylized crosshairs” and said there is “no sign of incitement as direct as in the Giffords attack” in the congressional baseball shooting and the rhetoric of “anti-Trump liberals.”

Conservatives online then accused the Times of getting its facts wrong on Loughner. For starters, there was never any evidence that Loughner had even seen the map.

According to CBS News, Loughner was a registered Independent who did not bother to vote in 2010, the year before the Giffords shooting. He also grew angry at Giffords after attending one of her campaign events.

At the time, CNN’s Jake Tapper poked holes into the argument that the Palin map inspired Loughner.

“There’s no evidence that the shooter even heard of Sarah Palin. And Palin aide Rebecca Mansour in a podcast interview says the image was not violent,” he said during an interview.” He added, “The shooter’s motives remain unclear. One acquaintance from 2007 described him as liberal. Democrats say, regardless, the rhetoric has to be civil.”

Bryce Tierney, a friend of Loughner’s, told Mother Jones that Loughner “held a years-long grudge against Giffords and had repeatedly derided her as a ‘fake.’ Loughner’s animus toward Giffords intensified after he attended one of her campaign events and she did not, in his view, sufficiently answer a question he had posed.” The question? “What is government if words have no meaning?”

Tierney told Mother Jones that Loughner “did not display any specific political or ideological bent,” Mother Jones wrote, quoting him as saying, “It wasn’t like he was in a certain party or went to rallies…It’s not like he’d go on political rants.” Rather, Loughner harbored the belief that government is “f*cking us over,” reported Mother Jones, which noted that Loughner filmed a bizarre YouTube video ranting about the “perils of currency.”

CBS News found that there was evidence to tie Loughner both to the far left and the far right, noting, “There are also components of Loughner’s belief system that one could tie to the far left – his decision to ‘favorite’ a YouTube video of a burning American flag, the inclusion of the Communist Manifesto on his reading list, his possible adherence to the 9/11 truther’ movement.”

But one expert on the “far-right fringe,” CBS wrote, “picked up on the apparent roots of Loughner’s suggestions that the government was engaging in mind control through grammar – an antigovernment extremist named David Wynn Miller, who ascribes nefarious intent to, among others, the U.S. Postal Service.” Loughner’s bizarre beliefs about currency and the totalitarian state is associated with the far-right Patriot Movement and some of his beliefs seemed to align with the sovereign citizen movement, according to CBS.

Ultimately, the network determined, “It seems illegitimate to tie Loughner to the mainstream right or mainstream left, as his beliefs were well within the realm of the fringe. Indeed, Loughner appears to have simply been a disturbed individual who lacked a coherent political philosophy other than a deep-seated anti-government sentiment.”

In the congressional baseball shooting, gunman James T. Hodgkinson had filled his social media accounts with political rhetoric against Donald Trump and Republicans. He expressed support for Democrat Bernie Sanders, even making Sanders his cover photo. A few examples from Hodgkinson’s pages:

His support for Bernie was clear.

You can read more about Jared Lee Loughner here: 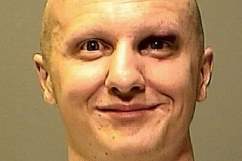