Authorities in West Goshen, Pennsylvania arrested a suspect in connection with the road-rage murder of 18-year-old Bianca Nikol Roberson.

David Desper, 28, turned himself in around 2 a.m. on July 2 and has been charged in Roberson’s murder, police said.

Thanks to the effort of our investigators and the support of the local community Bianca's killer is in custody and charged with murder. pic.twitter.com/R0A36q93yH

Roberson was killed after Depser allegedly shot her in the head with a 40 caliber Smith and Wesson handgun while driving his red pickup truck on the Route 100 bypass in Chester County around 5:30 p.m. June 28.

Desper has been formally charged with first-degree murder, third-degree murder, possessing an instrument of crime and recklessly engaging others, Chester County District Attorney Tom Hogan said at a press conference. He is being held in jail without bail.

Roberson is a recent graduate of Bayard Rustin High School in West Chester and planned to attend Jacksonville University in Florida in the fall. She is described by friends and family as a happy person that always seemed to have a smile on her face.

“This homicide was completely senseless,” West Goshen Police Chief Joseph Gleason said in a news briefing. “A beautiful young lady of 18 years of age, in the prime of her life, getting ready to go off to college. And for reasons that are incomprehensible to me, the family is now planning her funeral instead of a going-away party for college.”

Here’s what you need to know about Roberson:

1. Roberson Was Killed After Desper Allegedly Played a ‘Cat-And-Mouse Game’ With Her on the Roadway

Roberson was to get onto Route 100, merge onto 202 and make two turns before reaching her destination…a short commute. But just before merging, police said that her car, a green Chevrolet Malibu, and Desper’s red Chevrolet pickup truck started “jockeying” for position on the roadway.

Images from PennDOT’s traffic cameras show that Desper’s truck started in the left lane and Roberson’s Malibu was on right right. Signs on the roadway indicated that the left lane would end, meaning vehicles must merge to the right lane.

Pennsylvania Crime StoppersAn image of the two vehicles on the roadway.

According to police, the shooting occurred in a stretch of highway where both cars were driving at least 60 mph. It’s not believed that the two had any sort of confrontation prior to the quarter-mile stretch of road. Police released several images of the pickup truck as the hunt for Desper started.

WGPD has obtained images of the suspect vehicle in the murder of Bianca Roberson. Vehicle last known heading south on RT 352 into DELCO. pic.twitter.com/rrffGBfxLF

Police located Roberson dead inside of her Malibu after it crashed off of the road, and some witnesses described the incident as a “dangerous cat-and-mouse game.”

2. Roberson Was on Her Way Home From Shopping With Family When She Was Murdered

Roberson’s father Rodney said that his daughter was on her way back home from shopping for school supplies and groceries when she was shot and killed.

Rodney told The Philadelphia Inquirer that his daughter was shopping at an upscale town center, Main Street at Exton, with her mother and grandmother before leaving to drop off her purchases at home. He said that she was supposed to meet up with her friends after dropping off the new purchases. The route Bianca took to get home only would take her five minutes, and she was killed during that span.

According to media reports, her grandmother took the same route home from the mall and passed a crash scene, not knowing it was her granddaughter that was the victim.

3. Police Released a Sketch of the Suspect & He Turned Himself in Days Later

A sketch of the suspect in the murder.

Witnesses of the incident initially described the shooter to police as a white man with a medium build. He was described as having light brown or blonde hair and was said to be in his mid-20s to early 30s, and police released a sketch of him June 30.

A manhunt for the suspect in the sketch followed, although he remained unnamed. That is until two days later, when Desper turned himself into police in the early morning of July 2.

Police had initially thought that the suspect was from the area, and Desper’s from Trainer, about 17 miles south of West Goshen.

According to police, Desper’s red truck was recovered at a location in Delaware County and the gun he used in the murder was found in his bedroom. Court documents show that he has a license to carry the gun and purchased it legally.

As investigators announced that they had Desper in custody, Roberson’s parents sat in the press briefing quietly. NBC 10 News reported that the couple lost their son four years ago due to a heart disease.

4. Roberson Enjoyed Playing Basketball & Was Described as Being Filled With Joy

Roberson’s Facebook page is filled with photos and posts about her spending time with family members and friends. She enjoyed playing and watching sports, particularly basketball, and her friends said that she wanted to be an F.B.I. agent one day.

In the final post to her Facebook, sent just hours before she was killed, Roberson spoke about being “judged” by others.

Another post one day before asked her friends about a hairstyle she was thinking of trying out. Other posts show that she was active in her faith and loved music.

Videos posted to her Facebook show a happy Roberson hanging out with friends, dancing and having fun.

5. Family, Friends & the City Are in Mourning

Police were flooded with “at least 1,000 tips” in the two days since information and a sketch of Desper were released, a dispatcher told The Philadelphia Inquirer.

Chester County DA Tom Hogan also said that investigators continued to interview witnesses and tipsters, though it’s currently unknown if it was a tip that led to Desper turning himself in.

“We’re obviously looking for someone who not only fits the description, but someone who is not where they should be,” Hogan said to the newspaper. “Someone who should be at work and didn’t show up, someone who is missing appointments because they are hiding out.”

Authorities had thought that the suspect may have been from the area and collected footage from area businesses along the route.

While the investigation continued, Roberson’s family continued to mourn the loss of Bianca. They initially thought it was a car accident and didn’t find out until one day later that she had died from being shot.

Roberson’s brother Dontae Auburg told The Philadelphia Inquirer he first heard his sister had died after receiving an emotional call from his father whose voice was cracking as the raw emotion set in.

“Everyone is still in a state of disbelief,” Auburg said to the newspaper. “We wake up as if it’s a bad dream, and it’s not until we see the news that we realize it actually is a reality.

“Her mom just yelled. My dad started to cry more. Everyone was shocked — because a car crash was now a murder.”

In a statement issued by Jacksonville University, the school said it was saddened to learn of her death. Roberson was planning to major in psychology at the school.

A GoFundMe page was set up by a family friend to help support the family and assist with funeral costs. In two days, over $28,000 had been raised. 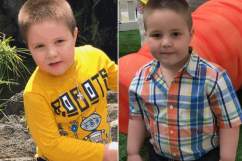 Loading more stories
wpDiscuz
50
0
Would love your thoughts, please comment.x
()
x
| Reply
Bianca Roberson, 18, was murdered after a road rage attack in Chester County. The search is underway for the male suspect in the case.