Jimi Taro Patrick, one of the four murdered Bucks County men, was a promising student at Loyola University in Maryland who was a youth athlete.

The unusual disappearance of Patrick, 19, and three other Pennsylvania men from the same county sparked a massive search effort. Tragically, authorities announced on July 13 that they found human remains on the rural property belonging to the parents of the person of interest, Cosmo DiNardo, 20. All of the missing men are between the ages of 19 and 22.

All of the men’s bodies have now been recovered, and DiNardo and his cousin, Sean Kratz, were charged with murder on July 14. DiNardo was charged with all four homicides, Kratz is accused of all of them but Patrick’s. The criminal complaints allege that the murders stemmed from drug deals that morphed into robberies in most cases. You can read them in full here.

In a July 13 news conference, Patrick’s family released a bio of Jimi Patrick through the DA. The family gives his name as Jimi Taro Patrick, although it was initially reported as Jimi Tar Patrick.

On July 13, DiNardo’s lawyer said that DiNardo had confessed to participating or committing the murders and had told police where the bodies were to avoid the death penalty. You can watch video of DiNardo saying he is sorry here.

According to The Associated Press, DiNardo allegedly confessed that he killed the men “separately after selling them marijuana and then burned their bodies at his family’s farm.”

1. Patrick Was the First of the Four Bucks County, Pennsyvlania Men To Mysteriously Vanish

Screengrab via NBC PhiladelphiaJimi Tar Patrick is second from right.

Jimi Taro Patrick vanished around 6 p.m. on Wednesday, July 5. He was the first of the four men to disappear. His family filed a missing person’s report the next day with the Newtown Township Police Department when he didn’t show up for work, which they considered unusual. Jimi’s family said in the bio was he was employed at a restaurant in Buckingham, Pennsylvania when he disappeared. In the past, he worked in food service at D’Youville Manor Yardley.

He was described as a white male, late teens, 5’10”, approximately 150 pounds and was last seen wearing gray shorts and polo shirt with a multi-colored design.

Finocchiaro was last seen getting into the car of a man who is not missing on July 7, reports the Bucks County Times. Sturgis and Meo were close friends, and they knew Finocchiaro, but it’s less clear how they knew DiNardo. 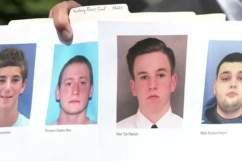 2. DiNardo Is Accused of Burying Patrick With a Backhoe After Meeting Him For a Drug Deal

The complaint alleges that, on July 5, DiNardo agreed to sell Jimi Patrick 4 pounds of marijuana for $8,000. He picked Patrick up at his home in Newtown and drove him to a rural property.

DiNardo drove a backhoe to where he had killed Patrick and dug a hole and buried him, the documents allege.

Hopes faded for the young men when the DA announced that, in addition to the body of Finocchiaro, authorities believed other remains were in a common grave on DiNardo’s parents’ farmland. It later turned out that three of the bodies were there, but that Patrick was buried elsewhere, on a hill nearby.

District Attorney Matthew D. Weintraub revealed in a rare midnight press conference: “This is a homicide, make no mistake about it,” Weintraub said. “We have found human remains. In an approximately 12 and a half foot deep common grave that we have painstakingly dug with a lot of care so as not to damage any potential evidence. I’m very, very sad to say that we can now identify Dean Finocchiaro, 19-years-old…as one of the people who was found buried in that grave.”

In the press conference, the DA also revealed: “There are additional human remains inside that grave. So this painstaking process will go on.”

He pledged, “We’re going to bring each one of these lost boys home to their families.”

The human remains were found on the property of Antonio and Sandra DiNardo, the parents of Cosmo DiNardo, who’s already under arrest and accused of charges that he tried to sell the car of Thomas Meo, one of the missing men. DiNardo was previously accused of a firearms offense, but he was released on $100,000 bail. His bail in the more recent case was set at $5 million. Police had said previously that they were searching multiple locations for the missing Bucks County men.

Cadaver dogs ultimately led authorities to the remains on the rural property.

3. Jimi Was a Business Major at Loyola University in Baltimore on a Full Scholarship

Patrick was described as “a rising sophomore” at Loyola University Maryland, a Jesuit school. University President The Rev. Brian Linnane, says Patrick finished out his freshman year “with distinction,” according to The Associated Press.

The family bio said that Jimi lived in Newtown, Pennsylvania with his grandparents, Sharon and Rich Patrick. He recently completed his freshman year at Loyola, where he was majoring in business and attending on a full scholarship. He was awarded academic recognition on the Dean’s list, according to the family bio.

Patrick’s college roommate wrote on Facebook, “I cant even wrap my mind around this. Bring the boys home.” Jimi’s friends told NBC News that Jimi was a “people person who would do anything for his friends and his family.”

4. Jimi Was a Facebook Friend of the Person of Interest, Cosmo DiNardo

As the search for the missing men intensified, authorities began looking for connections between DiNardo and the men. They discovered that Patrick was a Facebook friend of the person of interest.

Whether that tenuous link led to his disappearance is not yet clear, but attention focused around DiNardo even before human remains were found on his parents’ property.

According to Philly.com, “DiNardo and Patrick both attended Holy Ghost Preparatory School in Bensalem…They were also both members of a public Facebook group for buying and selling sneakers.”

Jimi’s family confirmed that he attended Holy Ghost Preparatory High School in Bensalem, Pennsylvania, where he “not only received distinguished honors for his academic performance, but also participated in numerous community service projects.”

Jimi attended St. Andrew School in Newtown and “is a member of St. Andrew Parish, Newtown, PA,” says his family.

DiNardo had troubled signs in his past. He was previously committed for mental health purposes, diagnosed as schizophrenic, and he’d also suffered a recent head injury. Eric Beitz, one of DiNardo’s friends, told Philly.com, “I can tell you on multiple different occasions, on multiple different accounts, from multiple different people, including myself – Cosmo has spoken about weird things like killing people and having people killed. Everybody you talk to about this guy, you hear he’s mentally unstable.” 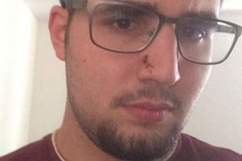 Jimi posted several photos of himself playing baseball on his Facebook page. “Suburban champs,” he titled one.

His page still contains posts from his earlier teen years, such as about buying a bike and watching Spongebob Squarepants. Others show him with dates in prom-like attire.

Jimi’s family says he was a member of the Holy Ghost Prep baseball team. As a child, Jimi played baseball for the Council Rock School District (Newtown) Little League, where he was “an exceleent pitcher and hitter.”

As a result, “he was a member of the Newtown travel team which won several tournaments and league trophies. Jimi also played basketball in the St. Andrew CYO league,” his family said in the bio.