Senator John McCain, 81, passed away on Saturday after being diagnosed with glioblastoma, a cancerous brain tumor, last summer.

News of his passing came just one day after Sen. McCain’s family released a statement saying that he would be discontinuing medical treatment in his battle with brain cancer. “…the progress of disease and the inexorable advance of age render their verdict,” the family’s statement read. “With his usual strength of will, he has now chosen to discontinue medical treatment. Our family is immensely grateful for the support and kindness of all his caregivers over the last year, and for the continuing outpouring of concern and affection from John’s many friends and associates, and the many thousands of people who are keeping him in their prayers. God bless and thank you all.”

Read on to learn more about McCain’s family.

The senator was married to his first wife, Carol Shepp, from 1965 to 1980, and adopted her sons from a previous marriage. Doug, a pilot for American Airlines, and Andy, who is an executive at the family beer distribution company, Hensley & Co. Together, John and Carol had Sidney, who is in the music business.

McCain married his second wife, Cindy Hensley, in 1980. Together, the couple had three children: Meghan, Jack, and Jimmy. They also adopted a daughter, Bridget.

2. His Daughter Meghan Is the Author of a Children’s Book Titled ‘”My Dad: John McCain”

Meghan McCain, 33, graduated from Columbia University, and is an American columnist, author, Fox News host, and a co-host on The View. She first began making headlines in 2008, while traveling with her father on the campaign trail. Meghan penned a blog called McCain Blogette, in which she chronicled her experiences on the campaign trail.

In 2008, Meghan wrote a children’s picture book titled “My Dad: John McCain”. Less than a year later, she signed a book deal with Hyperion, and in 2010, Meghan published a campaign memoir titled Dirty Sexy Politics.

The announcement that Meghan would be co-hosting The View came in October 2017. Meghan’s statement in response to the news read,  “I’m honored and proud to be part of such an iconic show with a diverse, smart, strong and interesting group of women… I’ve been a fan of the show for many years, so taking my seat at that table is definitely a career highlight!”

Last fall, Meghan pushed up the date of her wedding to Ben Domenech in light of her father’s battle with cancer.  Speaking about her daughter walking down the aisle, Cindy McCain said, “She was very calm and very positive… The day was here and her dad was here, which was the most important thing.”

3. His Youngest Daughter Was Adopted from Bangladesh

In 1991, Cindy brought home a three-month-old girl home from a Bangladeshi orphanage run by the late Mother Teresa in Dhaka to help her receive medical attention. The girl suffered from a cleft palate that was so severe she could not eat. John and Cindy subsequently adopted the young girl and named her Bridget.

In 2008, Bridget made an appearance at her father’s presidential campaign where a former aide, Wes Gullett, spoke about how she came to be part of the McCain family. According to The Telegraph, John McCain first learned of Bridget when he met his wife at the airport in Arizona. He reportedly asked Cindy, “Where is she going?” and Cindy replied, “To our house.” During the campaign, Gullett said, “I remember John’s face. That day he was not the tough war hero senator. He was like every other new father, full of love and emotion.”

Today, Bridget is 26, and graduated from Arizona State University.

4. His Youngest Sons Are In the Military

McCain’s two youngest sons, Jack and Jimmy, are in the military. Jimmy is a Marine, and has served tours in Iraq. John is a Navy lieutenant and helicopter pilot.

Last year, Jack made headlines after calling people who criticized an Old Navy ad featuring an interracial couple “ignorant racists.” In response to the criticism about the ad, Jack tweeted, “To the people upset about the #OldNavy ‘Scandal’ of a picture of a mixed race marriage, eat it.”

Jack is married to a black woman, Air Force Reserve Captain Renee Swift. The couple wed in 2013 at San Francisco’s Grace Cathedral. According to the Washington Post, he was one of the many who responded to the criticism by posting a picture of his own mixed-race family.

Roberta was born on February 7, 1912, in Muskogee, Oklahoma. She eloped to Admiral John S. McCain, Jr. in Caesar’s bar in Tijuana, Mexico in January 1933. Together, the couple has three children: Jean “Sandy” McCain, John McCain, and Joseph Pinckney McCain.

Roberta had an identical twin sister, Rowena, who died at age 99 in 2011. Rowena’s obituary read, “She was remembered by all that met her. She kept her remarkable beauty throughout her life. All that knew her will miss her.”

Roberta was involved in her son’s 2008 presidential campaign. She’s also spent some time in the limelight– in 2009, she was a guest on The Tonight Show with Jay Leno and in 2008, she was featured in a fashion shoot for Vogue.

On Friday, People reported that Roberta was well aware her son was planning to stop his brain cancer treatment. “Roberta is 106, but she’s spunky,” a close family friend reportedly told People. “She knows he is ill.” 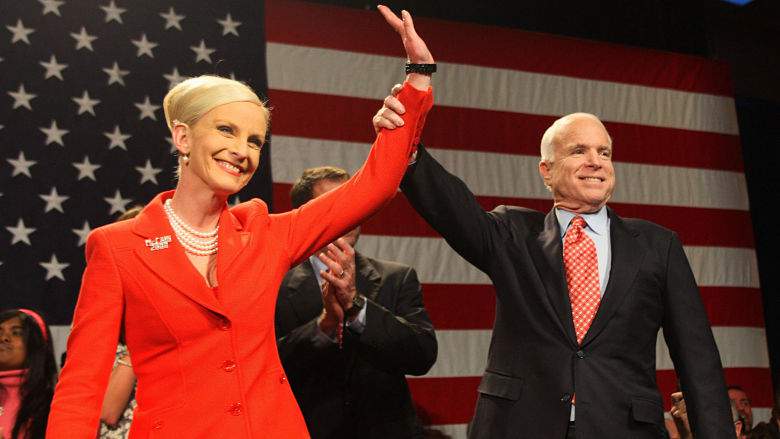