YouTube Donald Trump replaces a Marine's hat after it was blown off by the wind next to the president's helicopter.

Returning back to the United States on Saturday after a four-day trip to Europe for the G-20 Summit, President Donald Trump was involved in an unusual moment.

Trump, walking on the tarmac of Joint Base Andrews in Maryland, was approaching Marine One when he noticed that a Marine’s hat had blown of and was laying on the ground. The Marine was guarding the helicopter when a strong gust of wind blew it off.

Trump picked up the hat and placed it onto the Marine’s head, patting him on the shoulder as he tried to move along. However, the hat flew right back off, but that didn’t stop Trump from retrieving it a second time. The president walked back over to the hat, bent over and picked it up once more, handing it to a military official he was speaking with to give it back to the Marine.

Eventually, Trump finds his way onto Marine One while the hat finds its way back atop the head of the Marine.

Trump returned to the U.S. on Saturday after a trip to Poland and then Germany for the G-20 Summit, where many international issues were discussed with other world leaders.

The highlight of the trip was a face-to-face meeting with Russian President Vladimir Putin. The two had a meeting at the summit in Hamburg and discussed a wide array of topics in a meeting that ran well over the time allotted for it. It was scheduled to last 30 minutes, but ran for over two hours. The Washington Examiner reported that First Lady Melania Trump had to be sent into the room to try and end the meeting because of its substantial length.

“Several times I had to remind the president, people were sticking their heads in the door,” Secretary of State Rex Tillerson said, according to The Washington Examiner. “They even sent in the first lady at one point to see if she could get us out of there, and that didn’t work either. … We went another hour after she came in to see us, so clearly, she failed.”

The G-20 drew massive protests that brought widespread violence, fires, arrests, injuries and confrontations with police. Dubbed the “Welcome to Hell” demonstrations, hundreds of riot police tried to control a number of activists who lit fires and threw objects at police.

The protests caused much issue and left the first lady unable to leave her hotel in Hamburg.

Thinking of those hurt in #Hamburg protests. Hope everyone stay safe! #G20

Heavy’s Marcus Dipaola was on scene and recorded a video of him being attacked by a group of demonstrators, one who referred to him as a “Nazi.”

“I was confused, the right side of my face hurt,” DiPaola said. “I was kneeling on the ground and a guy said he’d piss on me, then kicked me out of my kneeling position and on to my side.” 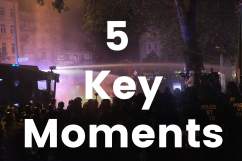 WATCH: 5 Key Moments from the G20 Night of Antifa Riots in Hamburg, Germany

Loading more stories
wpDiscuz
5
0
Would love your thoughts, please comment.x
()
x
| Reply
Just after he arrived back to the U.S. from Hamburg, Germany, President Donald Trump picked up a Marine's hat that was blown off by the wind. Watch the video.