During a press briefing on Wednesday afternoon, White House Senior Advisor Stephen Miller made a comment about Emma Lazarus’ poem, “The New Colossus,” which is inscribed on the Statue of Liberty. The comment was not well-received by social media and Twitter users were quick to voice their opinions on the matter.

Miller was on-hand to discuss the RAISE Act, which President Trump is supporting. The RAISE Act will reduce the rate of legal immigration in the United States, which has become a more controversial topic over the past several months.

The poem came up when CNN’s Jim Acosta questioned if the new bill would be in violation of the long-standing United States principle, “give me your tired, your poor, your huddled masses,” a quote from Lazarus’ most famous poem.

“The poem that you’re referring to was added later,” Miller said, appearing to brush it off. When Acosta tried to question him further, Miller changed his tone and continued on with his statement.

You can see the moment that Miller dismisses the poem in the video clip below.

Here is Stephen Miller actuallying the Emma Lazarus poem on the Statue of Liberty: pic.twitter.com/CWqMoDOmi1

You can read the full poem below.

“Not like the brazen giant of Greek fame,
With conquering limbs astride from land to land;
Here at our sea-washed, sunset gates shall stand
A mighty woman with a torch, whose flame
Is the imprisoned lightning, and her name
Mother of Exiles. From her beacon-hand
Glows world-wide welcome; her mild eyes command
The air-bridged harbor that twin cities frame.
“Keep ancient lands, your storied pomp!” cries she
With silent lips. “Give me your tired, your poor,
Your huddled masses yearning to breathe free,
The wretched refuse of your teeming shore.
Send these, the homeless, tempest-tost to me,
I lift my lamp beside the golden door!”

According to the Washington Post, Lazarus’ famous words have become a rally cry, of sorts, often used in various marches and other protests of President Trump and his policies.

“Scrawled across signs and typed out in tweets, those opposing the Trump administration’s immigration and refugee policies have made Lazarus’s most famous words their rallying cry, proof, they say, that American liberty means welcoming those in need, not shunning them.” 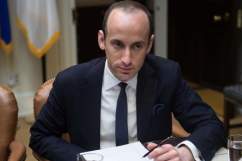 Read More
Politics, Statue of Liberty
wpDiscuz
0
0
Would love your thoughts, please comment.x
()
x
| Reply
Emma Lazarus' poem that is written on the Statue of Liberty was discussed in Stephen Miller's press conference on Wednesday.