In the drama-filled world of the White House, Hope Hicks, the 28-year-old enigmatic former model and college athlete who handled the media during Donald Trump’s campaign, has solidified her role as one of the few people the president seems to completely trust.

This has led Politico to label her the “Untouchable Hope Hicks” as others call her an “enigma.” She is not very active on social media, she is averse to interviews, and she doesn’t end up on TV.

She’s a Trump loyalist who’s gushed effusively about her boss (and received similar praise back) and who now, if a report is correct, is about to be elevated to the critically important position of White House Communications Director, despite a dearth of political experience, with the exception of Trump’s campaign. In June 2016, GQ called her the “27-year-old accidental press secretary for Donald Trump” and questioned how long she would last. However, last she has, while others have been fired in an at-times chaotic White House.

Who is Hope Hicks? How did she rise so fast? What’s her tie to Trump?

1. Trump Plans to Make Hicks His New Communications Director, a Report Says but It Might Just Be an Interim Job

GettyHope Hicks, White House Director of Strategic Communications, steps off Air Force One. She traveled with US President Donald Trump to his Bedminster, New Jersey golf club to spend the weekend.

The position of Communications Director in the Trump administration has been a very unstable one. Most recently, Anthony Scaramucci dramatically and colorfully vacated the position after stepping in it during a conversation with a reporter.

However, The New York Times is reporting the post would just be an interim one.

Hicks’ style couldn’t be more different than the brash and outspoken Scaramucci, who competed with Trump for limelight and controversy. She’s been repeatedly photographed at campaign and White House events, and she is considered one of the few White House officials whose job is safe, but she’s quietly worked under the radar. GQ called her “a hugger and a people pleaser, with long brown hair and green eyes, a young woman of distinctly all-American flavor” but that, and most other profiles, also note her reticence for the spotlight (which is somewhat similar to the elusive, private, and somewhat mysterious Melania’s, come to think of it.) When the GQ reporter tried to interview Hicks, she declined the interview but said the reporter could interview Trump about her with her in the room.

Daily Caller reported on August 16, through a source, that Trump has offered the Communications Director job to Hicks, and she has accepted it. She was already serving as Trump’s director of strategic communications. In fact, she was one of only two White House communications officials that Scaramucci had announced were staying for sure when he was first hired (Dan Scavino was the other). 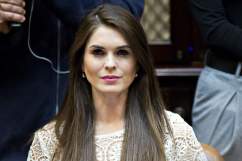 2. Hicks Worked for Trump & His Daughter, Ivanka, Before the Campaign

Of late, Trump seems to be weeding out political people (like Reince Priebus) and surrounding himself with family and loyalists who predate his political persona (as well as military types). Part of Hicks’ longevity may be explained by the fact she did not come out of Trump’s political world; she knew him, and was loyal to him, before it.

According to The Washington Post, Hicks became acquainted with Trump in 2012 when she joined a New York PR firm after graduating from Southern Methodist University and was assigned to work on various Trump-related accounts. She ended up working for Ivanka Trump’s fashion line in PR before Trump decided to make her his presidential campaign press secretary. She comes from a family with parents who worked as legislative aides in politics; her father was a communications official for the NFL and is now a managing partner of a PR firm.

Hicks posed in a lime green dress for Ivanka’s fashion line. You can see the photos here. “For Hope Hicks, The Trump Organization’s director of communications, a typical workday could include a major meeting, an all-day event or even an out-of-state trip. She gravitates toward pieces that will last through a plane ride or through the various phases of a work event (setup and teardown included),” the blurb with the fashion spread reads. The page quotes Hicks as saying, “In this outfit, I can jump on the shuttle to D.C. to do press for our upcoming hotel and come back to NYC in time for drinks with my boyfriend without having to change.”

One person who knows the White House told Politico that Hicks was a “souvenir from Trump Tower,” a person “who has made the journey with the president from his old life, with whom he can wax nostalgic about the good old days in New York.”

Hicks’ financial disclosure form shows she earned $141,417 as a communications consultant for Donald Trump for president, as well as $71,689 as communications director for the Trump Organization, and $21,830 working for Trump for America.

Hicks was a child model, for Ralph Lauren and on book covers. You can see some of her child modeling photos here and here.

3. Trump asked Her to Work As Press Secretary on His Campaign & Calls Hicks Nicknames

i think i can honestly say this is the first time i've heard hope hicks speak pic.twitter.com/HuidZhCNVk

Trump has called Hicks nicknames like “Hopester,” but she refers to him as “Mr. Trump.”

“I thought Hope was outstanding,” Trump told GQ. For her part, GQ quoted an insider who said Hicks takes it personally when Trump gets bad media coverage.

According to a Town and Country profile, Hicks grew up in Greenwich, Connecticut where she “swam at Greenwich Country Club, was co­-captain of the lacrosse team at Greenwich High School, and played lacrosse all four years in college.”

The magazine reports that she also was a model. “At 11, she and her sister were hired for a Ralph Lauren campaign. She was also tapped as the face of the Hourglass Adventures, a series of novels about a time-traveling 10­-year-­old.” She also had a Guiding Light cameo, according to the magazine.

Her father, Paul Hicks, is a public relations executive who handled communications for the NFL and, reports Town and Country, both her parents worked in politics; “her mother as legislative aide for a Democrat from Tennessee and her father as chief of staff for a Republican congressman from Connecticut.”

During the campaign, GQ noted that Hicks played a role in key controversies. “It was her job to facilitate Trump’s rebuke of the Pope …it was she who helped malign a female reporter who’d been manhandled by Trump’s campaign manager, immediately claiming she was a lying attention hound,” reported GQ, which added that she was a “registered but dispassionate Republican since 2008” with no political experience. She had a boyfriend, but they broke up because of her busy schedule, according to GQ. She isn’t married.

4. Hicks Has Gushed About the President, Calling His Personality ‘Magnetic’

Everyone knows that Trump is often a binary speaker. People are fantastic or wonderful or they are evil or bad. The few quotes that have emerged of Hicks talking about the president fall into the former category.

In spring 2017, she released a statement that praised the president so effusively that it was mocked on Twitter. “President Trump has a magnetic personality and exudes positive energy, which is infectious to those around him,” the statement said. “He has an unparalleled ability to communicate with people, whether he is speaking to a room of three or an arena of 30,000. He has built great relationships throughout his life and treats everyone with respect. He is brilliant with a great sense of humor . . . and an amazing ability to make people feel special and aspire to be more than even they thought possible.”

“I promise, he’s a good person!” Politico quoted her as telling naysayers at a family wedding. In turn, reported Politico, “She is protected, in a world of rival power centers, by the deep bond she shares with the man at the top.”

Hicks stands in the background as Trump signs executive orders.

Politico reported that she is sometimes treated like a family member, dining with Ivanka Trump and Jared Kushner and being one of the select few invited along to meet the Pope.

5. Hicks was at Trump’s Side for a Controversial Interview but Not All Other Staffers Are Happy

Hicks was at Trump’s side when he controversially “left open the possibility” of firing Special Counsel Robert Mueller in an interview with The New York Times, according to Politico. That generated some criticism, with people wondering why she didn’t intervene.

Conservative writer Mike Cernovich (who has been labeled “Alt-right”), claimed in a Medium article that National Security Adviser H.R. McMaster once said he is “not going to take orders from that high schooler,” referring to Hope Hicks.

“He (Trump) doesn’t have many people seasoned in governing around him, people who are able to give him the candid advice based on the experience of working in government who can help guide him to avoid pitfalls,” said Scott McClellan, a former press secretary to President George W. Bush, of Trump, in the profile on Hicks published by Politico.

Town and Country Magazine called Hicks an “enigma” and reported that she wrote a line in a Trump speech that said, “We are a country that stands united in condemning hate and evil in all of its very ugly forms.”