A 37-year-old Oklahoma woman used a Craigslist advertisement seeking an actor for a “10 day gig overseas” as a front for her plan to hire a hitman to poison her ex-husband, federal prosecutors say.

Danielle Dana Layman, a resident of Ponca City, Oklahoma, posted the ad to Craigslist in April of 2017. According to an affidavit written by federal task force officer David Otwell, Layman titled the post, “10 day gig overseas for amateur, competitive pay.” The listing said the person “Doesn’t have to be a professional actor,” but sought someone with the following qualifications: “Creative, outgoing and friendly, positive personality, boldness and bravery (some stunts may seem risky, although they are completely safe).” The ad also said preference would be given to those with experience acting, in magic shows and casino dealing, according to the affidavit.

Federal authorities learned about the plot after someone responded to the ad and met with Layman to discuss the “gig”. After searching Layman’s house, she was placed in federal custody. On July 1, she was charged with using interstate commerce facilities in the commission of murder-for-hire, according to the criminal complaint. Here’s what we know about the details surrounding her arrest.

1. The Woman Who Responded to the Ad & Tipped Off the FBI About the Plot Was Hailed as a Hero

As reported by Oklahoma City’s Fox 25, Tinsley Keefe says she responded to the Craigslist post, and met Layman, who called herself Samantha Dowry, at a coffee shop.
Keefe is a wedding officiant for both gay and straight couples in Oklahoma City, according to her Twitter account and linked website.

The affidavit says they met at the Perk Beverage Company in Ponca City on May 9. “When I got there, this gal that called herself Samantha Dowdy, or something like that, she got some information from me, and said ‘oh, and by the way, this is not about acting and modeling,’” Keefe told the news station.

Samantha Dowry is among Layman’s listed aliases in the criminal complaint, along with Danielle Givati and Dana Abecassis.

According to the affidavit, Layman immediately told Keefe that she wanted to poison someone with ricin, a naturally occurring and deadly poison derived from castor beans, which are also used to make castor oil. Layman then said if Keefe told anyone about this, they would both be killed. 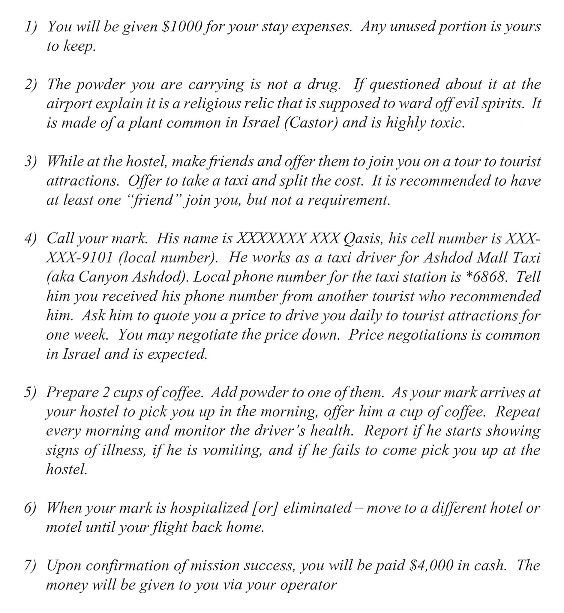 “Operation Insecticide” instructions from the affadivit

Keefe provided federal agents with the Power Point slideshow she says Layman showed her, which included instructions of how to find her target, a taxi driver, and kill him.

In the complaint, Keefe said she was instructed to travel to Tel Aviv, Israel, as a tourist, and was provided with the phone number of a taxi driver. She was to purchase two cups of coffee before getting in the cab, adding poison to the driver’s cup, and to continue using the driver’s services and providing him with poisoned coffee each day. “Repeat every morning and monitor the driver’s health. Report if he starts showing signs of illness, if he is vomiting, and if he fails to come pick you up at the hostel.”

The instructions continued: “When your mark is hospitalized [or] eliminated – move to a different hotel or motel until your flight back home.”

Layman offered Keefe $1,000 and the promise of $4,000 if she completed the mission successfully, prosecutors said in court documents. Layman also provided Keefe with codes to use to report updates and a small package that she said contained the plant form of ricin, police said. She told Keefe not to open the package without the use of gloves, according to investigators.

After Keefe left the meeting, she told federal agents she took photos of the codes and the vials inside the package. She then texted a lawyer friend, asking for advice on what to do. He urged her to contact the FBI, and records show that she made contact with federal agents the same day as her meeting with Layman.

3. Layman Claims to be the Former Director of Nursing for the Ministry of Labor in Israel 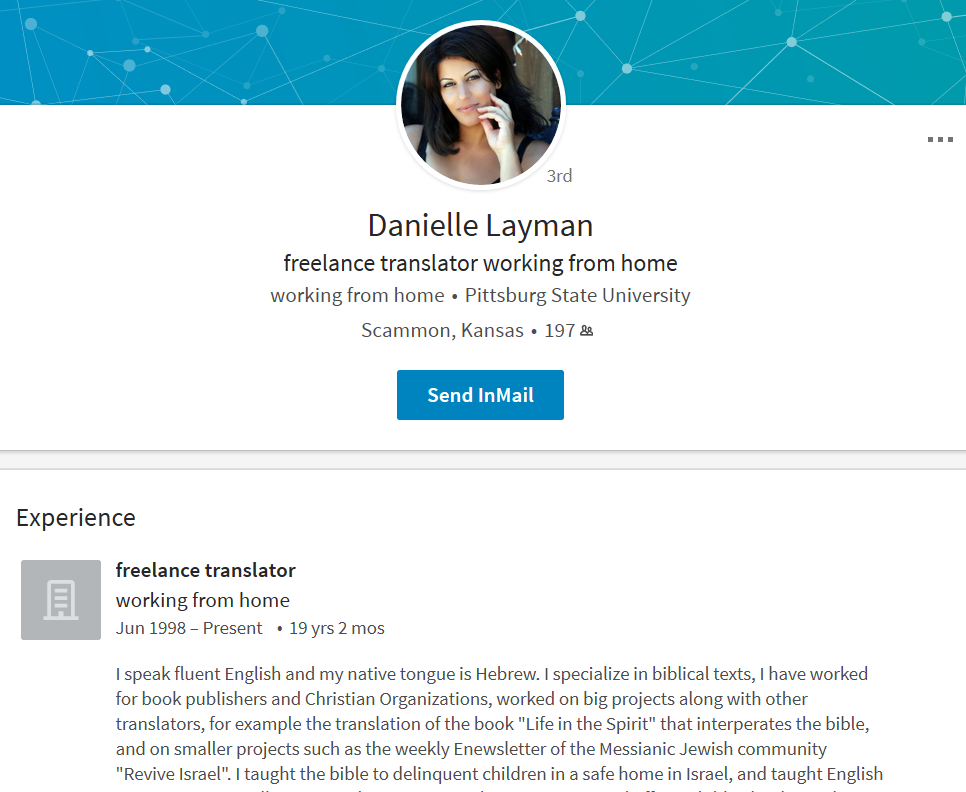 After federal agents database checks failed to verify Samantha Dowry as a real person, they discovered her true identity. Her non-immigrant visa lists her as Danielle Givati, an Israeli national and permanent resident of the United States. Her visa application listed her as the former Director of Nursing for the Ministry of Labor in Israel.

Otwell writes in the affidavit that Layman would “have some type of medical and scientific background.”

Her listed alias was Dana Abecassis, the same last name as the taxi driver she asked Keefe to kill.

On Layman’s LinkedIn profile page, though, there is no mention of a medical background. Instead, she appears to be seeking work as a translator.

4. Layman Was in a Legal Battle with her Ex-Husband Over Their Daughter 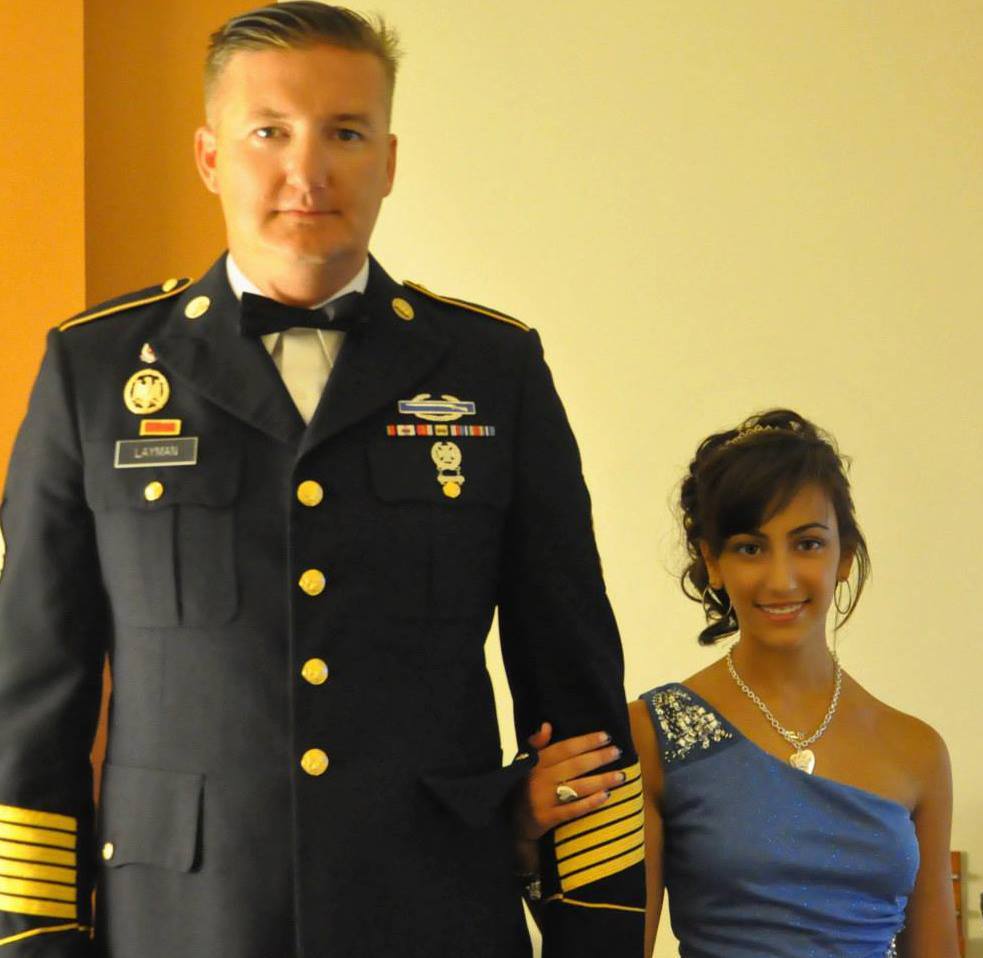 Federal agents performed a database search using the names “Abecassis” and “Layman.” Numerous Israeli newspaper articles from late 2014 mention Layman’s legal battles for visitation rights with her ex-husband over their then-13-year-old daughter.
Layman was divorced from Abecassis in 2003, later marrying American soldier Jeremy Layman in 2010, according to public records viewed by Heavy.

In 2014, while her husband was on deployment, Layman took her daughter to visit her family in Israel, according to the complaint. Abecassis then found out his ex-wife and daughter were in the country, and filed a lawsuit with the Ashdod Region Rabbinical Courts, demanding he be allowed visitation rights. His current wife served as his attorney, the complaint stated.

In a social media post from 2014, Jeremy Layman posted a photo of himself and Layman’s daughter, with the caption: “Last year=Miss Kansas Pre-teen Contestant, this year=Prisoner of the Rabbinical Court.” Layman was referring to the Miss Kansas competition that Layman’s daughter would compete in in 2013.

Though the daughter seemed to be prevented from leaving the country for an extended length of time, the affidavit says recent social media sites show the daughter is now back in the United States.

According to a story in the Oklahoman, Danielle Layman spoke to a reporter from the Times of Israel in 2014, saying, “We are dealing with a fanatical religious court. I’m not going to leave without my daughter, and I’m going to raise hell in the USA.”

When FBI agents searched Layman’s home on June 30, they found castor beans, a mortar and pestle with what appeared to be castor bean residue and instructions printed from the Internet on how to make ricin.

Otwell stated in the affidavit that he overheard Layman’s phone call to her husband during that search. She told him she had castor beans, that ricin can be made from castor beans, and that she knew how to do that. She also told him that she had printed off instructions on how to do so from the internet a year and a half ago.

After a preliminary hearing, Layman was released from federal custody on July 11, according to reports from the Tulsa World and NewsOK.com. She is under house arrest, and will be allowed to drive her children to and from school, as well as to her obstetrician’s office in Kansas, the local media reports. According to a statement the articles attribute to prosecutors, Layman is 15 weeks pregnant.

Loading more stories
wpDiscuz
1
0
Would love your thoughts, please comment.x
()
x
| Reply
A 37-year-old Oklahoma woman used a Craigslist advertisement seeking an actor for a “10 day gig overseas” as a front for her plan to hire a hitman to poison her ex-husband, federal prosecutors say.