So, let’s cut to the chase. Can you watch a solar eclipse with regular sunglasses? Do they protect the eyes enough?

The answer: According to NASA, absolutely not. We think they know what they’re talking about, so it’s a good idea to listen.

The same goes for 3D movie glasses. “Homemade filters or ordinary sunglasses, even very dark ones, are not safe for looking at the sun; they transmit thousands of times too much sunlight,” reports NASA. The space agency has an entire page devoted to how you can view the solar eclipse safely. A solar eclipse is when “the shadow of the moon completely obscure(s) the sun.”

CBC notes, “Sunglasses won’t cut it, not even those with extra-dark glass used by alpine skiers. They still allow too much sunlight to reach your eye. The difference? Eclipse glasses block 99.9999 per cent of sunlight. Try skiing while only being able to see 0.0001 per cent of your surroundings.”

The American Astronomical Society has a list of reputable vendors that sell solar eclipse glasses, solar filters and viewers.

In addition to not looking through regular sunglasses to view the solar eclipse – no, again, they won’t protect your eyes enough – NASA says you also shouldn’t look at the sun “through a camera, a telescope, binoculars, or any other optical device while using your eclipse glasses or hand-held solar viewer — the concentrated solar rays will damage the filter and enter your eye(s), causing serious injury.”

As the American Astronomical Society puts it: “Your eyes are precious!”

Vox explains, “The sun is the most powerful source of energy in the solar system. It’s the most energetic object for light-years in all directions (it’s literally a huge fusion reactor). The energy it expels is so intense it can actually burn holes in your vision.” Vox notes that “a total or partial solar eclipse will be visible from every single US state,” giving all Americans a rare opportunity to see a solar eclipse. However, you should do so safely, which means using protective glasses until “the moon has completely covered the sun during totality.”

Why can’t you use regular sunglasses? “Regular sunglasses won’t block enough light. You’ll need glasses that filter all but 0.003 percent of visible light and block out most ultraviolet and infrared as well,” according to Vox.

Vox notes that photo or X-ray film, looking through binoculars, mirrored cameras and telescopes are also not safe without special filters.

Travel and Leisure also offers up a list of nos: “…don’t use regular sunglasses, smoked glass, exposed film, or old solar eclipse glasses with even tiny scratches or holes.”

NASA also has an interactive map showing you key information about the solar eclipse in your area. Notes NASA: “Looking directly at the sun is unsafe except during the brief total phase of a solar eclipse (“totality”), when the moon entirely blocks the sun’s bright face, which will happen only within the narrow path of totality.”

CBC reminds you that it’s always dangerous to look at the sun directly, not just during an eclipse.

You can learn more about the solar eclipse of 2017 here: 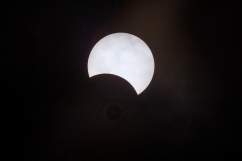 Loading more stories
wpDiscuz
6
0
Would love your thoughts, please comment.x
()
x
| Reply
Is it safe to watch the solar eclipse with regular sunglasses? The answer is no. Read more about why.