As the country continues to be consumed by information regarding Hurricane Harvey (which has been downgraded to a tropical storm), the Eastern seaboard has its eyes on another weather system that is expected to bring heavy rain and strong winds to the Carolinas early this evening and in the overnight hours.

What is being referred to as a “potential” tropical storm, the would-be-called Irma has formed and is currently sitting off the coast of Florida. It is already moving toward the Carolinas, and will officially arrive in the area on Monday night.

1. Florida Has Been Experiencing Downpours for Days Thanks to this Storm

From Tampa to Daytona, Florida has been subjected to heavy downpours thanks to Tropical Cyclone 10, which is expected to become Tropical Storm Irma over the next 24 hours or so.

According to The Weather Channel, several cities in Florida received impressive amounts of rainfall over the past few days. Sarasota received over 8 inches of rainfall on Saturday and a whopping 16.54 inches since last Wednesday. Fort Meyers saw over 13 inches and Naples had over 7.5 inches thanks to this storm.

The steadier bands of rain in Florida are expected to subside by Tuesday as the storm pulls away.

“The reason South Florida’s forecast is improving is because the tropical disturbance that has been gripping the state — now called Potential Tropical Cyclone Ten — is beginning to move up the east coast. It is being monitored by the National Hurricane Center as it is likely to become a tropical depression or tropical storm as it moves toward Georgia and South Carolina,” reports the Sun-Sentinel.

2. The Storm Will Move Up the Eastern Seaboard Beginning Monday Evening

The rain has already started falling in the Outer Banks, but is expected to intensify.

3. Tropical Storm Watches Have Been Issued in North & South Carolina

“Winds around the disturbance are estimated to be just under tropical storm force, so just a small amount of organization will bring it to tropical storm status,” according to AccuWeather Hurricane Expert Dan Kottlowski.

There is a flash flood watch issued in several counties including Cumberland, Edgecombe, Harnett and Johnston, from 5 p.m. Eastern Monday through 8 p.m. Tuesday. In addition, a wind advisory has been issued for many of the same counties. Gusts between 35 and 45 mph are expected over the next 24-48 hours, according to WRAL.

The storm is not expected to linger. AccuWeather reports that the storm will move into the area, bringing heavy rain and strong winds for about 24 hours, before moving out. South Carolina will start seeing the rain move in on Monday and southeastern Virginia will start seeing rain on Tuesday. Areas off the coast of Massachusetts will see rain from the storm as it pulls away from the United States on Wednesday.

4. Irma Is Expected to Go Out to Sea Before Reaching New England

Although some parts of New England are going to feel the effects of this storm, New England will not be hit directly. As you can see from the storm’s projected path, it’s going to head out to sea, traveling northeast at a pretty rapid pace. There will still be rain and wind on the outskirts of the storm, and the coastline may be impacted, though the weather is not expected to be severe.

Regardless which state you are in, this storm is expected to be in and out in a relatively short amount of time. That doesn’t mean, however, that it’s not something to pay attention to. Heavy rains for 12 to 24 hours can still cause localized flooding. Gusty winds may also bring down tree limbs and power lines.

5. Several Inches of Rain Are Possible

Most local news outlets are reporting that areas hit by this weather system will see anywhere from 1 to 4 inches of rain over the next 24 to 48 hours. However, the photo above from the National Hurricane Center predicts rainfall totals from 6 to 10 inches along the coast of North Carolina.

“Rainfall totals of 3 to 6 inches (locally up to 9 inches) are expected along the immediate coast, from South Carolina to North Carolina and southeast Virginia. Some localized flooding is possible in those areas,” reports The Weather Channel. 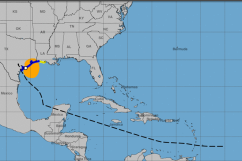 Where Is Hurricane Harvey Right Now?

Loading more stories
wpDiscuz
1
0
Would love your thoughts, please comment.x
()
x
| Reply
A potential tropical storm is threatening the Eastern Seaboard. Heavy rains and gusty winds are expected over the next 24 to 48 hours.