The 26-year-old singer belted out her new hit, “Your Song”, at the ceremony. She also rocked some awesome nail art on the red carpet, which featured throwback photos of Sarah Jessica Parker from Sex and the City, one of Snoop Dogg, and several of cupcakes.

The audience was showered during confetti during her performance.

Rita took the stage after performances by Lil Yachty and Kyle’s iSpy.

Ora is a British singer and actress who rose to prominence in 2012 when she was featured on DJ Fresh’s single “Hot Right Now”. She collaborated with Adidas in January 2014– the same year she released her single “I Will Never Let You Down” which became her 4th UK No. 1 single.

In 2015, Ora was a coach on season four of The Voice UK. She was also a judge on season twelve of The X Factor. 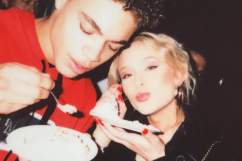