Hurricane Jose has been doing loops in the Atlantic for days now, but the latest GFS and European models have shown that the storm has moved west and could end up coming very close to the United States.

Right now, Jose is approximately 360 miles northeast of the Bahamas and 485 miles southwest of Bermuda.

Over the past couple of days, Jose has been downgraded to a tropical storm, but he expected to strengthen again, likely becoming a Category 1 hurricane before moving close to the east coast. While the National Hurricane Center has taken the state of Florida out of Jose’s path, it looks like he will come pretty close to the Carolinas — or to New York or New England — depending on how far west he travels.

At this time, the National Hurricane Center keeps Jose just offshore and doesn’t predict that the storm will make landfall in the U.S. over the next 3 to 5 days. However, there is a very large cone around that track which accounts for plenty of movement in any direction.

Below is a timeline for Jose. Depending on the track, the Carolinas and Virginia could start feeling the winds pick up as early as Sunday evening. If the storm heads toward New England, Tropical-Storm-Force winds could be in the area by Tuesday.

Below are graphics from the latest GFS model, showing Jose heading closer to New York and New England.

Latest GFS model shows Jose getting close to New England as we head through early next week. Could regain hurricane status. #lawx pic.twitter.com/uGBts8xqDD

Below are graphics from the latest Euro model.

Euro 00Z has Hurricane #Jose pass DC, head to New England then loop back to DC by the 24th. What an odd storm. pic.twitter.com/uzVeHIArTL

The tropics have been far from quiet since Hurricane Irma was first spotted. As she inched closer to the U.S., other storms developed, including Jose.

“Meanwhile, forecasters are keeping close tabs on two other weather systems, one of which is now Tropical Depression Fourteen and should become Tropical Storm Lee later Friday. That storm has 35 mph winds and is located about 430 miles southwest of the Cabo Verde Islands. The other system, now spinning about 1,200 miles east of the Windward Islands of the Caribbean, should eventually become Hurricane Maria next week,” reports USA Today. 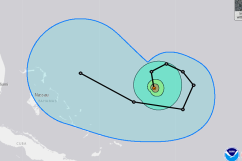 Will Hurricane Jose Hit the U.S?

Loading more stories
wpDiscuz
0
0
Would love your thoughts, please comment.x
()
x
| Reply
Hurricane Jose has been spinning around in the Atlantic but recently moved more west. Jose is a tropical storm that is expected to regain strength.