Chances are growing that Orlando, Florida could be affected by Hurricane Irma, which has shifted to the east in some of the recent forecasting models (versus, say, tracking westward out to the Gulf.)

There are increasing chances Irma will strike Florida, and Southern Florida is still said to be in the most immediate peril on the continental United States (mandatory evacuation orders were issued for the Florida Keys). However, no one is certain what the storm will do after that, which is increasing anxiety.

Orlando is now in the National Weather Service’s forecasting cone for the hurricane.

On September 6, The Orlando Sentinel reported: “Orlando and Central Florida are in the forecast cone of Irma’s potential path,” adding, “Central Florida could start feeling tropical storm wind impacts from the storm as early as Saturday morning.” You can see that cone graphic here:

The Hurricane Irma forecast cone as of 5 p.m. on September 6.

“Forecasters said the storm has continued to move closer to Florida, and there is an ‘increasing chance’ that it will impact the state,” reported the Sentinel of Irma, which made landfall in Barbuda overnight.

The forecasts show that Orlando is likely to see some impact from Irma in terms of rain and wind, but there was still not a hurricane watch or warning for the city on September 6. Keep in mind, again, that the storm remains unpredictable. Take proper cautions and keep an eye on the forecasts.

5 AM AST forecast and key messages for Hurricane #Irma. Go to https://t.co/tW4KeGdBFb for the latest forecast. pic.twitter.com/N7gnRJ5B8N

The latest hazardous weather outlook for Orlando continued to highlight the uncertainty.

The hazardous weather outlook for Orlando for September 6 reported, “While forecast for this weekend still remains somewhat uncertain, Major Hurricane Irma is forecast to move west-northwest into the eastern Florida Straits on Saturday, then turn north and make its closest approach to central Florida, through Sunday night or early Monday. While it is still too early to be specific about direct impacts that Irma will have on east central Florida, there is an increasing likelihood that Irma will produce a significant deterioration of weather conditions as it passes by.”

The storm is a monster.

“It’s already the strongest hurricane ever recorded outside the Caribbean and the Gulf of Mexico, and it’s likely to make landfall somewhere in Florida over the weekend,” The Washington Post reported. Read about the potential impact on Disney World here.

“All of Florida — especially South Florida and the Keys — should be preparing for a major hurricane landfall on Sunday. Tropical-storm-force winds are expected to arrive as soon as Friday.” The Post noted of the storm’s unpredictability: “Computer models are in strong agreement that by Saturday, Irma will be approaching the Florida Keys — where dangerous storm conditions are likely. Then, they show a sharp northward turn by Sunday morning. The precise timing and location of the turn has huge implications for Florida.” It’s not clear how the storm will track after that, The Post reported – east Florida, west Florida or straight up into the state. However, as noted, the recent models show a move toward the east.

“Irma has become one of the most powerful storms in history with the National Hurricane Center calling it ‘potentially catastrophic,'” reports The Orlando Sentinel. “It’s tied with Hurricane Wilma as the second strongest storm that’s formed in the Atlantic Ocean on record, both just behind Hurricane Allen in 1980, which had wind speeds of 190 mph.”

Gov. Rick Scott activated the Florida Air and Army National Guard and declared a state of emergency in Florida. You can see the latest radar for Orlando, Florida here. Note that Orlando’s weather forecasts come out of the Melbourne, Florida office of the National Weather Service. See an hourly forecast for Orlando here. See infrared satellite maps here.

The time to think about securing things around your home is well before the winds pick up ahead of an approaching tropical system! #flwx pic.twitter.com/oDeV7mvcPO

The detailed weather forecast for Orlando was as follows on September 6:

Showers and thunderstorms likely after 1pm. Mostly cloudy, with a high near 90. Calm wind becoming south around 5 mph in the afternoon. Chance of precipitation is 60%. New rainfall amounts between a tenth and quarter of an inch, except higher amounts possible in thunderstorms.

Showers and thunderstorms likely, mainly before 9pm. Mostly cloudy, with a low around 75. West northwest wind around 5 mph becoming calm in the evening. Chance of precipitation is 60%. New rainfall amounts between a tenth and quarter of an inch, except higher amounts possible in thunderstorms.

A 50 percent chance of showers and thunderstorms after noon. Partly sunny, with a high near 92. Northeast wind around 5 mph. New rainfall amounts between a tenth and quarter of an inch, except higher amounts possible in thunderstorms.

A 50 percent chance of showers and thunderstorms before 3am. Mostly cloudy, with a low around 76. East northeast wind 5 to 10 mph.

A 50 percent chance of showers and thunderstorms after 9am. Mostly cloudy, with a high near 91. North northeast wind 5 to 15 mph.

A 50 percent chance of showers and thunderstorms. Mostly cloudy, with a low around 76. Northeast wind 10 to 15 mph.

A chance of showers and thunderstorms, then showers likely and possibly a thunderstorm after 9am. Mostly cloudy, with a high near 87. Northeast wind 10 to 15 mph, with gusts as high as 20 mph. Chance of precipitation is 60%.
Saturday Night

Tropical storm conditions possible. Showers likely and possibly a thunderstorm. Cloudy, with a low around 76. Chance of precipitation is 60%.

Hurricane conditions possible. Showers likely and possibly a thunderstorm. Cloudy, with a high near 83. Chance of precipitation is 70%.

Showers likely and possibly a thunderstorm. Cloudy, with a low around 74. Windy, with an east northeast wind 15 to 25 mph, with gusts as high as 35 mph. Chance of precipitation is 70%.

Showers likely and possibly a thunderstorm. Mostly cloudy, with a high near 83. Windy, with an east northeast wind 40 to 45 mph decreasing to 30 to 35 mph in the afternoon. Winds could gust as high as 55 mph. Chance of precipitation is 60%.

Showers and thunderstorms likely. Mostly cloudy, with a low around 74. Windy, with a southwest wind around 20 mph, with gusts as high as 30 mph. Chance of precipitation is 60%.

A 30 percent chance of showers and thunderstorms. Mostly sunny, with a high near 88. West southwest wind around 15 mph, with gusts as high as 25 mph.” 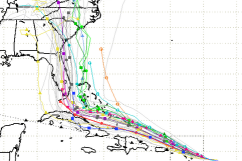