White House Chief of Staff John Kelly appeared to have an embarrassed reaction as President Donald Trump delivered remarks at the United Nations on Tuesday.

While sitting directly behind First Lady Melania Trump, Kelly held his head in his hands and then stared directly toward the ground with his elbows on his knees.

During Trump’s speech, he referred to North Korean leader Kim Jong Un as being a “rocket man on a suicide mission” and vowed to “totally destroy” the communist Asian country if necessary.

Media reports say Trump’s advisers scrapped using the nickname to refer to the North Korean leader. Instead, Trump rolled with it during his speech in front of many world leaders.

This isn’t the first time Kelly’s appeared disappointed during a Trump speech, though. Just last month, as Trump held an impromptu press conference addressing the widespread violence in Charlottesville, Virginia, a photo surfaced showing Kelly reacting in a similar fashion.

Kelly was seen standing off to the side of Trump, looking on with other members of the administration. NBC News reporter Kristin Donnelly captured a photo of the general standing with his arms crossed on his chest, his head looking to the ground and a blank expression on his face.

John Kelly during the President's Q and A at Trump Tower pic.twitter.com/vxR3hTUqe3

The reaction came after Trump blamed “both sides” for the violence spurred by a white supremacist rally in the city.

“You had many people in that group other than neo-Nazis and white nationalists,” Trump said.

Prior to landing the Chief of Staff job, Kelly served in the administration as the secretary of the Department of Homeland Security. He was hired to serve as Trump’s Chief of Staff after Reince Priebus was relieved of his duties in late July.

“Kelly’s hiring is expected to usher in potentially sweeping structural changes to the turbulent operation,” The Washington Post wrote.

The White House has publicly said that all people within the administration would report to Kelly. On his first day in the new position, Kelly fired communications director Anthony Scaramucci, who lasted in the role just 10 days. 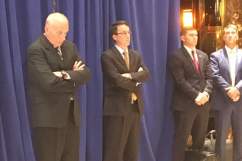 Loading more stories
wpDiscuz
8
0
Would love your thoughts, please comment.x
()
x
| Reply
During President Trump's speech in front of the leaders of the United Nations, Chief of Staff John Kelly appeared embarrassed. See a photo of his reaction.