On Tuesday, September 12, the Miami-Dade Police Department shared a video of a nun with a chainsaw, cutting through a tree that had fallen after Hurricane Irma swept through the area over the weekend. The video has since gone viral, garnering over 1 million views in just 18 hours.

“Sister Margaret Ann was in her full habit at the time. She says the road was blocked by debris from the hurricane and she could not get through. So, she did what any normal nun would do: She grabbed a chainsaw to clean up the downed trees,” reports CBS Boston.

An off-duty Miami-Dade police officer saw Sister Margaret Ann and stopped to offer his help. He also decided to take a video, which the department decided to share on Facebook. The officer said that other people stopped to help the nun and it ended up being a joint effort of people coming together and helping one another in a time of need.

“The road was blocked, we couldn’t get through. And I saw somebody spin in the mud and almost go into a wall, going off the road. So, there was a need, I had the means — so I wanted to help out,” Sister Margaret Ann told CNN.

According to NPR, Sister Margaret Ann is the principal of Archbishop Coleman F. Carroll High School in Miami.

“We are so blessed to have her and the Carmelite Sisters at our school. We are proud of the example they show for our students and other members of the community every day,” the school posted on its Facebook page after the video of Sister Margaret Ann went viral.

Hurricane Irma ripped through parts of southern and central Florida over the weekend as a Category 4 storm. She brought heavy rain and wind to various areas from coast to coast, leaving some serious flooding and destruction in her wake. 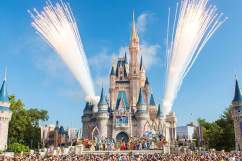 Loading more stories
wpDiscuz
1
0
Would love your thoughts, please comment.x
()
x
| Reply
Sister Margaret Ann got out a chainsaw and started cutting up a tree in Miami after Hurricane Irma.